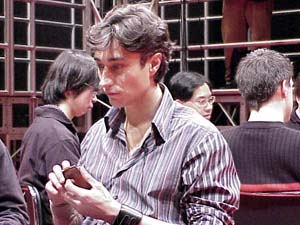 both of these players, being in the Semifinals is the culmination of a great deal of effort. It took Peset 59 straight PTQs (with 25 Top 8s), three GP day twos and a French Nationals Top 8 to finally make it to Kobe and his first Pro Tour. As if he was inspired to make this event count after trying so hard to get here, he's found himself one match from the finals. Masashiro Kuroda has exorcised the ghosts of being unable to make the Top 8 after tremendous day one finishes, and is now two match wins away from becoming the first Japanese Pro Tour Champion. This table is a milestone for both players' careers, but only one will be able to take the next step and earn the right to play for a Pro Tour title.

Peset cycled a Spellbomb and summoned Solemn Simulacrum on turn four. Kuroda cast Pulse of the Forge on end step, untapped, and played a Simulacrum of his own. Peset attacked, and they traded. Peset used Seething Song to play Furnace Dragon, losing two artifact lands in the process. Kuroda had an answer, using Electrostatic Bolt and Barbed Lightning with entwine to kill it. He played an Arc-Slogger on his turn, and Peset cast Pulse of the Forge on end step, which went back into his hand. Flamebreak and a Bolt dealt with the Slogger, which shot Peset for two damage before dying. Kuroda cast Fireball to bring Peset down to four, and another on the following turn ended the game.

Peset cycled a Spellbomb and drew another but didn't draw a fourth land, which made him miss a Simulacrum drop. Kuroda played one that was Bolted, and Peset drew a land and played his. Kuroda came back with Arc-Slogger, and Peset's Simulacrum attacked past it for two. Peset was one mana short of being able to kill the Slogger with Fireball, but with some Electrostatic Bolt assistance it was able to get the job done. The Slogger shot Peset once before heading to the graveyard, bringing him to eighteen. On Kuroda's turn Molten Rain destroyed one of Peset's mountains, and nothing else was cast. Peset's Simulacrum attacked for two, and a Spellbomb came into play.

A Bolt killed the Simulacrum on end step, Kuroda untapped, and destroyed a Talisman with Echoing Ruin to leave Peset with four mana sources while he had seven. The Spellbomb was cycled on end step and Peset drew into more mana, playing a land and an Arc-Slogger. Kuroda played a Simulacrum, and it was sacrificed immediately to a Shrapnel Blast to kill the Slogger. Peset drew another one right off the top and put it into play, but Kuroda had another Shrapnel Blast ready. Peset played a Talisman and a Spellbomb, leaving him with two Pulse of the Forge in hand. Kuroda played a Simulacrum and Peset cycled the Spellbomb, playing his own Simulacrum. It died to a Bolt, and Kuroda's was able to get through for two damage. Peset was absolutely telegraphing the Pulse at this point, as he looked at the even life totals and did some counting, then decided to do nothing on end step with his three untapped mana.

Peset played a Spellbomb and allowed the Simulacrum to deal two and bring him to a lower life total, and Molten Rain destroyed a Great Furnace. The Spellbomb was cycled, and Peset thought about what to do on his end step. He tapped a Talisman to take a point of damage, and cast Pulse of the Forge, bringing Kuroda to twelve while he was at eleven and got the spell back. The next turn was extremely interesting. Kuroda could attack with the Simulacrum and Fireball for the win, but there was a major problem with this play. It would bring Peset down to nine, where he would be able to ping himself and play the Pulse, getting it back to play it once more along with the other copy to deal the twelve total damage necessary. All this doesn't even take Shunt into consideration. After some thought, Kuroda decided not to attack since he was one mana short of being able to Fireball for the full eleven anyway. On end step, Peset tapped both Talismans to take damage and mana burn, bringing him to seven. He then untapped, and was able to play Pulse of the Forge three times thanks to having two copies and a Seething Song.

Kuroda played a Nexus and attacked with it a turn later, then played a second and Detonated a Talisman. Peset played another Talisman, interestingly choosing not to play a third land. He played it on the following turn, and summoned a Simulacrum. Kuroda attacked with a Nexus, and the Simulacrum swung back for two. Peset added Arc-Slogger to his side, Shrapnel Blast killed the beast, and Peset had another. This one died to Barbed Lightning and a Bolt, and as Sloggers were being burned up the Simulacrum kept attacking. Peset played a Talisman, along with two Spellbombs. Kuroda played a Simulacrum, and on end step both Spellbombs went to the dome. This brought Kuroda to ten, and Fireball put him at four where a Pulse did the rest.

Peset's opening hand only contained one land, but also a Spellbomb, Seething Song, a Simulacrum and a Talisman (the other cards were a Slogger and Flameback). As long as one land showed up, his draw would be fine, and he was drawing first too. After some thought, he decided to send it back. Both players had Simulacrums on turn four, and Kuroda played an Arc-Slogger, shooting down Peset's "Jens". Peset was able to clear the board, playing a Flamebreak and a Spellbomb to finish off the Slogger. Kuroda made another Simulacrum, and Peset played a Slogger to shoot it down (although a Nexus was able to get through for a point). Peset thought he was safe, but two Shrapnel Blasts and a Barbed Lightning shocked him in more ways than one, bringing the match to a fifth and deciding game. 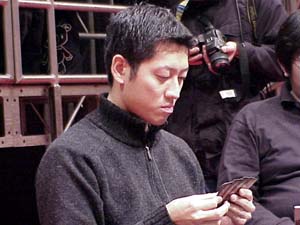 Peset played a Spellbomb and a Talisman, which was destroyed by Echoing Ruin. Peset drew and despondently said go after missing his third land drop, with body language that screamed, "My Pro Tour has come to this." If Kuroda hadn't destroyed the Talisman, Peset would have been able to play Arc-Slogger on turn three with Seething Song. Kuroda slammed down a Molten Rain on one of Peset's two lands, and his Arc-Slogger came out on turn five. Peset finally found a second land, but it was far too late. The Slogger shot Peset three times, and Pulse of the Forge along with an attack gave Kuroda a spot in the finals.