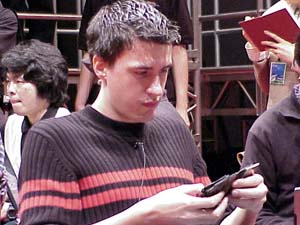 player had to do much play testing for this match-up after they became aware of their potential clash in the bracket. The two players are on friendly terms and spent much time over the weekend playing their decks against one another. Gabriel was not excited about facing this deck as he lad lost about eighty percent of the games they had played.

Gabriel was playing the TwelvePost deck that he and several other French players worked on. The deck was the talk of the tournament--most of the talk seemed to revolve around how the deck could ever beat an Affinity deck. Yet Gabriel went 2-1 against Affinity in the Swiss and had just dispatched Ben Stark with Affinity in the quarters.

Jelger appeared very confident and Gabriel broached the topic of a prize split. Jelger just shook his head and prepared for the match. Jelger had worked with YMG for this tournament and his Affinity deck had some unusual card choices such as Aether Vial and Myr Retriever. As a result he was playing more land than most of the affinity decks in the field.

Gabriel was much more concerned about Jelger's Affinity deck with its nineteen lands. There were less opportunities for him to take advantage of his opponent's mana issues--look at his previous match for illustration--and the Blinkmoth Nexus made his Oblivion Stones less useful than against sixteen land Affinity without Mishras.

Gab opened with Forest while Jelger had an Aether Vial. It was Oxidized EOT. Nassif untapped and Sylvan Scryed for a Cloudpost. Jelger summoned an Arcbound Ravager. Gab played a turn three Oblivion Stone.

Jelger had a free turn before the Stone could come online and exploded his deck all over the play area. He cast Frogmite and Thoughtcast for two cards. He played another Frogmite and an Arcbound Worker. After that he dropped a Myr Enforcer. Gabriel nodded as Jelger attacked with the Ravager. The Dutchman sacrificed a land and got in for two.

Gabriel played a Solemn Simulacrum and passed the turn hoping to not see a Disciple of the Vault. Jelger played a Vault of the Whispers and the Disciple and both players reached for their sideboards.

Gabriel took out his Simulacrums, Darksteel Colossus, a Tooth and Nail, Mindslavers and a Duplicant for Tel-Jilad Chosen and Chalice of the Void. As he boarded, Kai Budde was standing along the rail and asked Gabriel how many Pro Points he had coming into the match. The Frenchman shrugged, "I don't know…thirty-two or three?"

Forest from Gabriel allowed him to Osixidize an Aether Vial for the second time in two games. He untapped and played a Chalice for one. Jelger had no turn two play. Gabriel used Sylvan Scrying to find his third land and put his Cloudpost into play.

Jelger played Thoughtcast on the third turn and had no other action. Gabriel drew another land and played an Oblivion Stone. Jelger cast Myr Enforcer. Gabriel played two Tel-Jilad Chosen on the next turn. Jelger had no play again and could not attack either. Gabriel Shamaned the Enforcer and attacked for four.

Jelger passed the next turn and took six on the attack. A turn later Gabriel animated a Stalking Stones and he fell to one. He scooped shortly thereafter.

Gabriel laughed at his good fortune, "Did you have a hand full of one casting cost spells?"

Jelger kept his hand while Gabriel contemplated the merits of a five lander. His two spells were Chalice and Platinum Angel. He stared at his hand for a long time before deciding that he would run with it.

The Dutchman opened with a Furnace. Gabriel drew into a Oblivion Stone and led off with Cloudpost. Jelger had an Ornithopter and a Ravager on turn two. Gabriel put down a Chalice for one on the next turn to avoid a repeat of the first game.

Jelger got in for one with the Ravager and played his Myr Enforcer. Gabe played his Oblivion Stone and a Chalice set on zero. Jelger attacked and ate his Ornithopter and a Furnace to deal seven. Gab could only play a land and pass the turn. Jelger attacked him down to five and the Frenchman put a fate counter on his Chalice that was set on one EOT.

He played a land and blew up the world on the next turn. Jelger had no play and Gabriel dropped another Stone on his next turn. Jelger was sitting on two lands and passed the turn again. Gab played a Viridian Shaman and sat on a Vault of Whispers. Jelger Terrored the Shaman in response.

On the next turn he played a Glimmervoid. Nassif played a Shaman to kill both lands. Jelger top decked another Vault of Whispers but Gabriel had another Shaman. Jelger shook his head in disbelief. Gabriel was able to play a Platinum Angel while his opponent was stuck on zero permanents.

Gabriel laughed at the fortunate turn of events, "I am missing my way through."

Jelger agreed, "You are winning this Pro Tour."

Jelger was now willing to talk about the possibility of a split. Gabriel laughed, "I don't think I am the favorite to win this--even up 2-1--but it doesn't seem right to accept. You turned down my split."

Jelger opened with an Aether Vial and Gabriel had a Cloudpost on the first turn, "It gets to live this time."

Jelger played an Arcbound Ravager and passed the turn. Gabriel had a Tel-Jilad Chosen but Jelger exploded on his third turn. He cast an Aether Vial and drew two with Thoughtcast. He followed that up with Arcbound Worker, Frogmite and Myr Enforcer.

Gabriel played a Shaman and debated about what to take out. He settled on the Ravager. Jelger had to think now. He sacrificed an Aether Vial and an Arcbound Worker to the Ravager--he made the Enforcer a 5/5--and then sacrificed the Ravager to make his Frogmite a 5/5 as well.

The Tel-Jilad Chosen absorbed the brunt of one 5/5 while the Shaman was mowed down by the other. Gabe played another Tel-Jilad Chosen on his turn. He had to leave his Blinkmoth Nexus available in case Jelger flashed out a Ravager with his Vial.

Jelger could not attack and Gabriel found a second Cloudpost with Reap and Sow and also played a Talisman. Jelger still had no play and only one card in hand. Gab played a Chalice for one and an Oblivion Stone. Jelger passed the turn with a frown and Gab put a counter on the Chalice.

On his turn he entwined Tooth and Nail to find and put a pair of Shamans into play killing both creatures on Jelger's team. Gab attacked for four. Jelger searched desperately for a hope of winning with Thoughtcast and was able to drop a Frogmite into play but that was it for his turn. Gab had another Tooth and Nail and entwined it for Leonin Abunas and Platinum Angel. 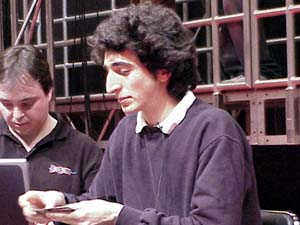 Jelger slowly pulled the top card of his deck onto the table and peeled up the corner hoping for a miracle. He saw a Seat of the Synod and offered his hand to Gabriel Nassif.

Nassif goes go on to face the winner of the Big Red mirror match between Masashiro Kuroda and Alexandre Peset--neither of whom could have been happy to hear that all of the Affinity decks were done for the weekend.