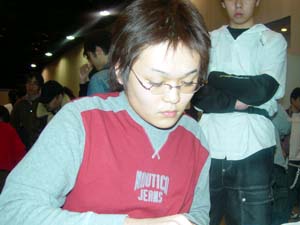 Sasaki has served his one year suspension, and now he's back with a vengeance. He made Top 8 at Grand Prix Shizuoka back in the fall, and now has another Grand Prix Top 8 for the season. With two more match wins, he'll be able to do one better and win the whole thing.

Sasaki played Sunstrike Trident, and Shimura played Oxidda Golem on turn three, getting through for damage. A Nim Lasher was 3/1 thanks to Sasaki's Darksteel Citadel, but it quickly died to Electrostatic Bolt, clearing the way for another Golem attack. Sasaki's Nim Abomination stopped the Golem from attacking, at least for a turn. The Abomination attacked for three, and Sasaki played Wizard Replica. It blocked the Golem and forced a trade, thanks to a Tooth of Chiss-Goria. Shimura was stuck with only four mountains, lacking a plains with a hand full of white cards. Sasaki took advantage, playing an Arcbound Hybrid to attack for six. Shimura was too far behind to catch up, and conceded.

Shimura played a first turn Chromatic Sphere, and cracked it to play a second turn Leonin Skyhunter. Sasaki had a second turn Myr, and smashed with an Arcbound Hybrid on turn three. The Skyhunter attacked back, and Shimura played Hematite Golem. Sasaki summoned Frogmite, and kept his creatures back on defense. The Skyhunter continued attacking, and Shimura put more threats in the air with Slith Ascendant. Irradiate killed the Golem, and Sasaki's team came through for five damage. Shimura's fliers attacked for three, and the Slith grew to 2/2. Arcbound Bruiser came out on the ground, and was bigger than anything Sasaki had. Unable to go on offense without losing a creature, Sasaki played Slagwurm Armor, put it on Silver Myr, and said go. This gave Shimura free reign to attack with his fliers, and Leonin Scimitar along with Emissary of Hope finished it up.

Sasaki played a first turn Slagwurm Armor, and Shimura played Leonin Scimitar. Sasaki played Frogmite on turn three, and Shimura summoned Oxidda Golem, keeping it back. Goblin Replica built up Sasaki's side a little more, and Shimura's Golem grabbed the Scimitar to get through for four damage. Shimura put the Armor on the Replica, and Shimura went to the air with Pteron Ghost, giving it the Scimitar. Shimura targeted the Golem with Goblin Replica, perhaps looking to get a trade with the Ghost, but Shimura had Razor Barrier. Sasaki's Nim Lasher died to Electrostatic Bolt, and he was quickly falling behind. A second Nim Lasher took the Slagwurm Armor to provide a much needed blocker, but the Ghost was still swinging for two damage a turn. After a few attacks, Sasaki found an answer in Echoing Decay. Shimura played an Arcbound Bruiser, and gave the Golem the Scimitar. It attacked, and pumped to trade with the Armored Lasher. Shimura still had white mana available, and used it to play Leonin Skyhunter. 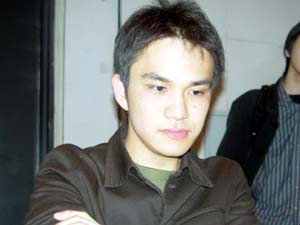 Sasaki used Irradiate to kill the Oxidda Golem, and played a Nim Shrieker. It donned the Armor, and was now a 4/7 flier. He was at five, but seemed to have the board stabilized. Shimura played Rustmouth Ogre, and put the Scimitar on the Bruiser. Sasaki played Wall of Blood and Sunstrike Trident, which provided him with a win condition while neither played could successfully attack. Shimura played Rustpore Ram to destroy the Slagwurm Armor, making combat a far more attractive proposition. He put the Scimitar on the Ogre, and attacked with all his creatures, which was enough to convince Sasaki to concede.