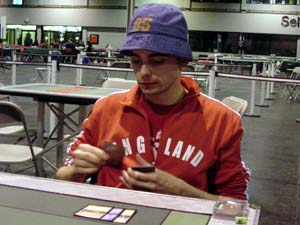 disposed of his kid brother in the Quarter's and now faces the host nation's last chance to take the title in David Grant.

Jedlicka popped an Aether Spellbomb early, possibly in search of land. If it was the case it worked as he found a third land for a Neurok Spy and then went on a Journey of Discovery to find a fourth the following turn.

Grant meanwhile failed to get off the ground. A Steel Wall with a Bonesplitter was it as he missed a couple of land drops. Jedlicka wasn't really punishing him yet and Grant managed to find a third land to first make a Soldier Replica and then find a fourth land with a Thoughtcast.

Ominously the green monsters started to rumble out of Jedicka's deck. First a Tel-Jihad Archers, then a Tel-Jihad Exile. Grant took to the skies with a Hoverguard Observer and gave it a Bonesplitter.

He wasn't really in this race though. Jedlicka summoned a Wurmskin Forger and sent in a 4/4 Spy and 3/6 Archers to knock Grant down to 7 life.

Grant attacked with the Observer and then thought for a while before summoning a Somber Hoverguard and giving it the Axe.

An entwined Barbed Lightning got rid of Grant's only blocker and another attack from the Spy and Archers was lethal.

It was Jedlicka who managed to miss a third land drop in the second game. Fortunately his second turn Myr still enabled him to make a Neurok Spy.

Grant's deck was misbehaving. His first spell was a Skyhunter Patrol on turn 4. Worse, Jedlicka found a third land and was able to cast Crystal Shard and activate it to bounce the Patrol.

Grant had the déjà vu feeling as the Patrol came out again. The game looked to be heading into a snarl-up. Jedlicka's spy and Tel-Jihad Exile were not getting past Grant's patrol while Grant had to contend with Jedlicka's Shard and then Sun Droplet.

Grant brought out a Loxodon Mystic to further gum up the ground. It was used to keep a Tangle Spider busy while Grant let a Spy and Exile through. It got worse for the Englishman as Jedlicka tapped six and dropped a Mindslaver onto the table.

"That's not very nice, I don't like that," Grant said.

His best response was to attack back for one with a Slith.

Jedlicka sent in the Spy and Exile. Grant had to block this time with the Patrol and sure enough Jedlicka had the Predator's Strike to march right through. He had four mana and the Mindslaver went off. Grant had an end step of damage limitation.

His damage limitation wasn't too bad. A Blinding Beam meant Jedlicka couldn't attack him while he was defenceless the following turn. It was still pretty bad though as Jedlicka made sure he had a Steel Wall on the table to render the Neurok Spy unblockable. A freshly drawn Test of Faith was cast frivalously on the Mystic and then his mana was tapped out to ensure the Shard would bounce the Elephant tapper. 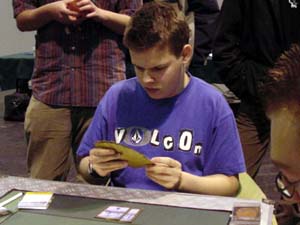 Grant held on. Jedlicka couldn't attack while Grant was defenceless as his creatures couldn't untap because of the Beam. It was fingernails stuff though. A Forger turned the Spy into a 5/5 and Grant was down to five. The next turn the Mystic was active and able to hold that at bay. Grant couldn't attack with his fliers past Jedlicka's Spider.

Grant didn't have much choice but to concede at that point.