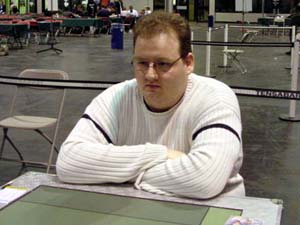 K, the man from the Netherlands. Praised and respected by his peers, amongst whom none other then Kai Budde himself, has mostly gone unnoticed by the fans. Renee has made two GP top 8's, one team, on individual, but is otherwise mostly unknown to this reporter.

Frank won the toss and went first. He started with a Morningstar and Vulshok Gauntlets, while his opponent played a turn one Bola and turn 2 Myr Retreiver. Renee followed that up with a Nim Lasher, promising to end the game fast with artifact-powered beats. He sent in the Lasher and Frank decided not to block with his freshly cast Cobalt Golem, after which Renee played a Spikeshot Goblin. Frank played a Myr and equipped it with the Morningstar. He didn't attack, hoping to outlast the Bola with enough blockers. Renee then played a Hoversail though, and swung in the air with his now 4-power flying Lasher. He looked to be ending the game quick with a Bola holding the blockers away and a flyer that got bigger every turn. Frank needed a way to kill the Lasher, and he needed it now. He never got it though, and despite playing several blockers he died to the Bola backed Flying Lasher.

After that game, Frank decided he needed something special to win, so he boarded in his two Drooling Ogres, thinking he had more artifacts and that the Drooling Ogres allowed him to muster up quick beats against Renee's also pretty quick beatdown deck. He felt his deck was just strictly worse, and needed to get tricky to win.
He also took out his colored creatures (Quicksilver Behemoth, Krak-Clan Grunt) for artifact versions (Elf Replica, Clockwork Condor).

Franks first hand didn't have any of this trickery though. Just 5 lands, a Dirigible and a Condor, and he send it back quickly. He kept his 6-carder. Renee's hand also wasn't the best, with only one land and a Talisman. But drawing first, and the fact that most of the spells cost only two or three mana, he kept it.

Frank played first and played a turn two Drooling Ogre, shouting out a "Yaus!". Renee didn't find the odds he needed and didn't draw his second land. Frank followed up with elf replica, and when Renee drew his second land and played a talisman, the Ogre changed sides. Frank got it back with cobalt golem though, keeping up the beats. Renee drew his third land, but could only play a Grimclaw bats. Ogre stayed on franks side, and looked to be pretty good against the slowed start of Renee. Frank then played an Arbound Hybrid and just send with his team. Sure, a guy got eaten by the Bats, but Renee was at 6 already after that attack. The Ogre plan looked to be working, but then Renee played another Talisman, getting the 3/3 on his side again. Franks next turn kept on the beats with an an Oxidia Golem, getting back the Ogre. It looked like there was little Renee could do against the Ogre infused beatdown by Frank Karsten. He shattered an attacker, traded one with the bats, but as the dust settled, Frank had the Ogre and a Hybrid left, and Renee was at two with only two talismans at his side. Renee played an Oxidia golem of his own, gaining custody of the Ogre, but Frank obviously had another artifact, a Spire Golem to get it back again. After the Arcbound Hybrid and Oxidia Golem traded the spire Golem became 4/6, the Ogre was franks again, and Renee once again had nothing. His next turn consisted of Echoing Ruining the Golem and a Nim Lasher, but all that could do was trade with the ogre. Frank then played his last card, a Clockwork Condor, and that was enough to deal the last two points of damage. Drooling Ogre…who knew!

Feeling that his luck couldn't last, and the fact that Renee was playing first this time, made it so that Frank put his Ogres back in the board, putting the good creatures back in his deck. 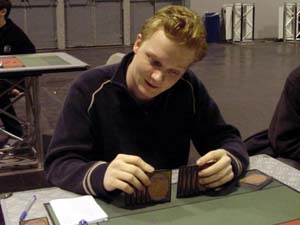 Renee decided to go first, and kept his hand, while Frankie took another trip to Paris. The action was on immediately because Renee Shattered Franks turn one Pyrite Spellbomb, clearly not wanting his turn three Lasher to get killed. Frank was stuck on two mana after that though, being able to muster nothing more than a Morningstar and a Shatter on Renee's Goblin Replica. The Vulshok Gauntlets that followed for Frank looked terrible though, but Renee had no more gas either. Just his 1/1 Lasher, beating down. Frank finally found his third land and played his most drafted Mirrodin card on Magic Online, Elf Replica. Renee then found a third Swamp and played his bomb, Greater Harvester. Sure, he would have to sac some stuff too, but he had nothing but land and a useless Lasher. Frank still only had three land and the best he could do was equip his Elf Replica with Vulshok Gauntlets, hoping that Rene wouldn't have any removal in his hand. Rene had a Shatter though and Frank sacked his two equipments to the Harvester. That left him with just three lands in play; not a good board against the Harvester. After chump-blocking a couple times, Frank simply scooped up his cards and that was it.