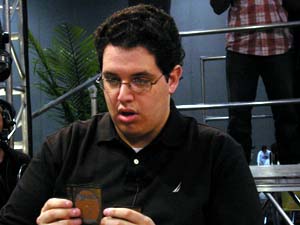 Turian is calling this his farewell Pro Tour. He's certainly going out with a bang. Following up on his Top 8 at Amsterdam, Turian is going one better this time around, and now stands in a position to win the whole thing. Standing in his way is someone who knows a thing or two about winning Limited Pro Tours: Nicolai Herzog. He took home the title at Amsterdam after Turian's quarterfinal exit. If the need to win wasn't pressure enough, both of these players are in the race for the Player of the Year title.

Herzog won the roll and played a second-turn Iron Myr. Turian led with a mountain, which had Herzog calling for the Slith Firewalker, but Turian just played a plains and passed the turn. Herzog busted out Granite Shard and shot Turian when he played out a Skyhunter Cub. Next up for Herzog was Myr Matrix.

Turian just nodded with a smile and dropped Specter's Shroud on his Cub, snagging a Darksteel Gargoyle from Herzog. Herzog untapped and considered his options. He could Echoing Decay the Cub and then ping it with the Granite Shard, or he could Echoing Ruin the Shroud and ground it, then Decay it. He chose the latter. Turian replaced his monster with a Skyhunter Patrol. Herzog played the last card in his hand, Grimclaw Bats, and passed it back.

Turian looked at his four land and ended up doing nothing. Herzog played another land. Turian made a Leonin Abunas, and Herzog shot him and made a token. He played another land and did the same after Turian found his fifth and made a Loxodon Mystic. Soon he had three tokens on his side. Turian swung with his Patrol for two and waited on seven mana.

Herzog got up to four tokens and swarmed in with his tokens and bats, leaving Iron Myr at home. Turian blocked two tokens with Abunas and Mystic. They resolved damage. Herzog tried to finish the Mystic off with his Shard, but Turian's Razor Barrier made the save. Herzog followed up with Electrostatic Bolt, and the tapper went to the graveyard.

Turian swung all out, and played Slith Ascendant. Herzog shrugged and pushed all his men into the middle. Turian entwined Roar of the Kha. In response, Herzog pinged the Slith and Terrored another creature, leaving Turian no escape.

"It is actually ridiculous." - Nicolai Herzog

"It wins games all by itself." - Mike Turian

While waiting for the cameras to roll, Herzog shiverd.

"It's really cold in here … and I'm from Norway!" - Nicolai Herzog

Turian answered an Iron Myr with Skyhunter Cub, and then played Leonin Den-Guard when Herzog only made a Talisman. Turian attacked but had no further play. Herzog's five mana gave him a Panoptic Mirror. The next turn, when he tapped five more and put Essence Drain on it, Turian gave an appreciative frown.

"I was hoping that when you tapped five it would be Myr Matrix again." - Mike Turian

He drained the Cub and passed it back to Turian. He, in turn, dropped Neurok Hoversail on his Den-Guard.

He started sending the Mirror to the face.

"Can you win against this?" - Nicolai Herzog

Down came an Ogre Leadfoot for Herzog.

"I can win against that." - Mike Turian

Turian was accumulating cards in hand. Herzog dropped Moriok Scavenger and Vulshok Berserker. Again Turian did nothing. Herzog hit with Scavenger and the Ogre, but Turian had Raise the Alarm to help his cat take down the 3/3. Better still, he saved his token with an Awe Strike. The other one exited after chumping the Scavenger. He untapped and dropped Skyhunter Patrol and Mindstorm Crown.

Herzog was more interested in doing unfair things. He Drained the Patrol, played Granite Shard and offed the token, then Bartered a path for his Berserker. Turian drew, and then scooped.

Turian kicked off with Pyrite Spellbomb, and then a tardy Auriok Transfixer. Herzog made an Iron Myr. Turian swung in heedless and Herzog made the trade. His being on three mana was good for Turian's Slith Ascendant, just in case he had Granite Shard in hand. Herzog played a Leaden Myr and passed it back.

Vulshok Berserker began the beats in earnest for Turian. Herzog got an Ogre Leadfoot stand in the way. Turian's Spellbomb offed the Myr and he dropped Whispersilk Cloak, giving Herzog just one turn to deal with the Ascendant. He aimed a Terror at it. Unfortunately for him, Slith Firewalker was on deck ready to pick up the Cloak. Herzog was in a pickle.

He played his sixth land and Mirror Golem before accepting more beats. He swung back and played Greater Harvester, then immediately realized the opening he'd left.

"Do you have Grab in hand? Because that would be insane." - Nicolai Herzog

Herzog deflated in his chair.

"At least it's not going to kill you." - Mike Turian

"It's not going to make him stronger, either." - Gary Wise, from the gallery

Herzog sacrificed his Harvester and hoped to rip the Barter. He did not.

"Oh well. I'm sure I would have won anyway." - Mike Turian

They started shuffling for Game 4.

"I was surprised you traded the Myr for the Transfixer." - Mike Turian

"Well, I had plenty of land, and red. I was happy." - Nicolai Herzog

"We were both happy." - Nicolai Herzog

"… You were really happy?" - Mike Turian

Now it was Herzog's turn to play first. He led with Iron Myr, then Vulshok Berserker, which ran headlong into Raise the Alarm. Turian had no third land, and gave it back.

Herzog got the crowd to gasp when he dropped Greater Harvester.

It looked like it was all over for Turian. He played Mirrodin's Core and passed it back. Awe Strike bought him a turn. Herzog added Lodestone Myr to his team. Turian's fouth land was waiting on top of his deck.

"Got the Purge?" - Nicolai Herzog

All he committed to was putting Atog on the board. Herzog untapped and considered things, then put the Lodestone Myr in his yard. Turian was visibly shocked.

He sent the Harvester and the Atog took it on the chin. Razor Barrier saved it. Herzog added a Leaden Myr. Turian busted out with Slith Firewalker and Slith Ascendant. Terror dispatched the Ascendant at end of turn, then Herzog untapped, lost a land, played Granite Shard and pinged the Firewalker. The Atog got run over. 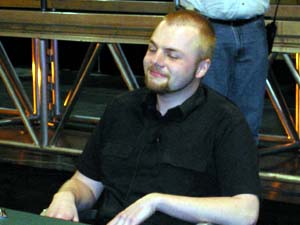 Turian played a very sad Abunas. Herzog stung him during upkeep and lost his Myr, then brought the Harvester again, taking care of the Abunas. This time, though, Turian had no play on his turn. Herzog lost a land and went to swing, but Turian's unentwined Grab the Reins worked as a fog.

All Turian could manage then was Whispersilk Cloak, desperately trying to run Herzog out of permanents to sacrifice. The Harvester hit and he lost the Cloak and a land. He untapped and played Arcbound Slith and Sunbeam Spellbomb. Slith took the hit while Herzog continued to draw land. Sunbeam Spellbomb turned up an emergency Auriok Glaivemaster that was happy to hit the graveyard. But after that Turian's deck was running on empty. He fell to two lands and hoped to draw the Purge. When he didn't, he extended the hand.