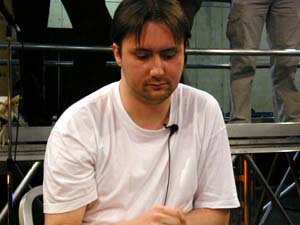 and Ruel are no strangers to the Top 8, but neither has ever won the whole thing. This is particularly significant for Jonsson, who is now playing in the Top 8 for the fourth time in his career. Another interesting aspect of this match-up is the level of effort both players have put in. Jonsson is notorious for practicing quite a bit, especially on Magic Online. Ruel visited practically every Grand Prix during the Mirrodin Block draft season, going on a two month tour of the world and perfecting his understanding of the format in the process. Obviously, the practice has paid off since they both made it to this point, although two more wins would mean a lot more for either player.

Jonsson's opening hand contained a Myr, a Spellbomb and the ever important Vedalken Engineer. It even had a Scale and Myr Enforcer, but only one land. It was a hard decision to make (especially since Jonsson was playing first), because if he drew a land he'd be in great shape, but if he didn't he'd obviously be in some trouble. After some thought, he decided that the gamble was worth it. Ruel decided to take a mulligan of his own. The second land didn't come, but cracking the AEther Spellbomb provided a swamp. This set Jonsson back some, since he got his first blue source of the game on turn three, via Silver Myr. Meanwhile, Ruel had a Bonesplitter that went on a Pteron Ghost, as well as Alpha Myr. Jonsson drew another land and had Slagwurm Armor, Chromatic Sphere, Scale of Chiss-Goria, and Myr Enforcer. The Ghost attacked for three, and Ruel played Sword of Fire and Ice. The Enforcer attacked back, and Jonsson played Spire Golem. Ruel put the Sword on the Ghost, and attacked through to kill the Myr and draw a card. Soldier Replica provided a little more defense, but Jonsson's Enforcer was able to get through again for damage. Slagwurm Armor went on the Spire Golem, but it didn't slow down Ruel's assault much. He played Vulshok Berserker, gave the Bonesplitter to the Soldier, and attacked with all his creatures. The Engineer blocked the Alpha Myr, and Spire Golem blocked the Ghost, allowing Ruel's other two attackers to get through for six. Jonsson played Cathodion and a Slith Bloodletter. Now at three, Jonsson was given one turn to find an answer as Ruel played Skyhunter Patrol giving him two fliers to Jonsson's Golem. Jonsson topdecked Nim Shrieker, but it didn't matter much as Soldier Replica kept combat in Ruel's favor. A second Ghost provided one more flier, and Jonsson conceded.

Jonsson played Slagwurm Armor, and Ruel had Bonesplitter. It was more of the same from Game 1 as he followed up with Pteron Ghost, except this time Jonsson was able to keep tempo by killing it with Echoing Decay. This made Jonsson sigh when Spikeshot Goblin emerged a turn later, but luckily Consume Spirit was waiting on top of his library. Krark-Clan Grunt took the Bonesplitter, and Jonsson played Nim Shrieker. The Grunt attacked for four, and Ruel played Auriok Steelshaper along with Soldier Replica. Jonsson played Spire Golem, and Ruel added more equipment to his team with Leonin Scimitar, giving it to the Steelshaper and moving the Bonesplitter to the Grunt. He then attacked with all his creatures- with Soldier Replica ready to activate, any block was going to be ugly for Jonsson. He blocked the Steelshaper with the Shrieker and the Grunt with the Golem- the Soldier took care of the Shrieker, and the Scimitar was sacrificed so that the Grunt would win combat and survive as well. This left Jonsson with no creatures, and he used Murderous Spoils to kill the Grunt- he couldn't get the Bonesplitter since it was sacrificed, but the play was still a 2-for-1. Ruel attacked with the Steelshaper and played a Razor Golem, as Jonsson went digging for answers with Thoughtcast. He drew into Chromatic Sphere and Viridian Longbow, and cracked the Sphere to draw into Sun Droplet and play it.

Jonsson was now waiting to draw any creature, while Ruel's creatures continued to attack unimpeded. The Sun Droplet was stalling things a little, but Jonsson would need to draw something to protect him soon. Eventually, Myr Enforcer showed up, and took the Slagwurm Armor. It was given the Longbow once it became active, and Ruel drew into Vulshok Gauntlets. He activated them to go onto the Ghost, and Jonsson shot it in response. This left his blocker tapped, and Ruel put the Gauntlets on his Golem, which allowed him to attack for eight. Jonsson played Slith Bloodletter, and it now seemed that Ruel had run out steam. The massive Enforcer was holding everyone back thanks to the Armor, and with every passing turn the Longbow was dealing another point to Ruel. Eventually the Sun Droplet even ran out of counters, as Jonsson went back to sixteen life. He drew into a Quicksilver Behemoth and gave it the Armor, which allowed it to get through for damage. 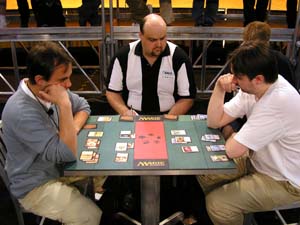 It seemed that the ending was a foregone conclusion, but Ruel started to build a little momentum. He used Purge to kill the Enforcer, and played Alpha, Leaden and Gold Myrs. He was still far behind, but the potential for a miracle draw along with a Blinding Beam provided a faint glimmer of hope. Jonsson played Myr Retriever and Silver Myr to provide some chump blockers if that scenario were to happen. Indeed, Ruel drew and played Blinding Beam, and attacked with all his creatures. Still, Jonsson was at seventeen life, and with a Sun Droplet in play he wasn't going to be in danger anytime soon. The Retriever also blocked to bring back the Enforcer. It came out on Jonsson's turn, along with an Engineer. Jonsson asked out loud if Ruel had one more Beam, but he had drawn into Leonin Shikari instead. At this point, even the Sword of Fire and Ice he drew a turn later wasn't enough, as Jonsson had a far better board, and his Longbow did the rest.

Ruel started with Auriok Glaivemaster, and Jonsson played Viridian Longbow. Ruel brought out a Gold Myr, and Jonsson played Myr Retriever. Ruel summoned a Krark-Clan Grunt and Jonsson put the Longbow on his Retriever, where it would be able to do some serious damage to Ruel's team. Ruel brought out a Scimitar and a Steelshaper, and when he tried to equip it, the Myr shot it in response. This allowed him to equip the Glaivemaster, and attack for six total. It seemed that Ruel's fast start would give him the edge, but Sun Droplet came out to make life difficult. Echoing Decay also killed the Glaivemaster, and Ruel played another Myr, as he struggled to fight an uphill battle against Sun Droplet, with creatures that were vulnerable to the Longbow. Jonsson improved things more with a Tooth, as Ruel drew a second Scimitar and gave it to his Grunt, along with the first one. It attacked, and got through for four damage. Ruel went to move the Scimitar to a Myr, but Jonsson shot it down in response. This let him give the Scimitar to the other Myr, but it still died thanks to the Longbow being moved around on Jonsson's turn.

Ruel wasn't out of offense though, as he played Vulshok Berserker and attacked with his team, bringing Jonsson down to one. The Sun Droplet would let him get back to a comfortable life total, but the next few turns would be tricky, especially with the two Blinding Beams in Ruel's deck. Ruel had no cards in hand, so for Jonsson it now became a case of being ahead, but still preparing for the worst. He played a Nim Shrieker and ended his turn, keeping back everyone on defense in case of Blinding Beam. Ruel drew and played Leonin Shikari, and was able to take down Myr Enforcer in combat with the Grunt thanks to sacrificing a Scimitar. The Retriever brought it back, and Jonsson was now forced with the tough decision of saying go and letting Ruel buy more time to catch up, or putting pressure on him with the Shrieker and risking a loss if Blinding Beam came off the top of the library. Eventually he decided to attack, and the Shrieker dealt eight, putt Ruel at dead next turn. Ruel didn't draw the Beam, and Jonsson went up two games to one.

Ruel opened with a Glaivemaster, and Jonsson played Slagwurm Armor. Jonsson pumped his fist when Ruel didn't play Bonesplitter, instead bringing out Gold Myr. Still, this let him accelerate out a Skyhunter Patrol, while Jonsson had Slith Bloodletter and Neurok Spy. Ruel put a Scimitar on the Glaivemaster, attacked with it and the Patrol for five, and played a second Scimitar. Jonsson drew and passed the turn, even staying back with his Spy. Ruel had Blinding Beam to take care of Jonsson's blockers, although Echoing Decay killed one of the Glaivemasters. Jonsson summoned Nim Shrieker, and once Ruel put Sword of Fire and Ice on the Patrol, he conceded. 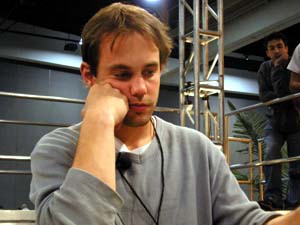 Jonsson played a Longbow, and Ruel had a Scimitar. This was followed by a Leaden Myr on turn two, which Jonsson decided to kill with Consume Spirit. Ruel played a Soldier Replica, and Jonsson had a Nim Shrieker. The Replica took the Scimitar and attacked for two, before being joined by Razor Golem. Jonsson got some badly needed defense in the form of Myr Enforcer, as his Shrieker attacked for three. Ruel untapped and played a Bonesplitter and a Scimitar, putting the Scimitar on the Golem and attacking with both his creatures. Jonsson didn't block and took six, going down to thirteen. Jonsson sent his Shrieker over again, and played Quicksilver Behemoth. Ruel put all the equipment on the Razor Golem and attacked. The Behemoth and Enforcer ganged up on it, and the Soldier made everyone die, leaving Nim Shrieker as the only creature on the table. Ruel played Pteron Ghost on the following turn, giving it all the equipment. Sword of Fire and Ice made it a massive threat, and Jonsson just shook his head as that decided the match.