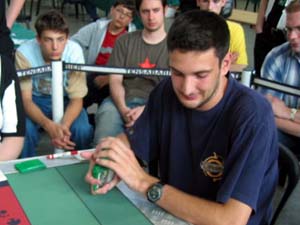 lone Swiss keeping the dream alive. He doesn't have a lot of public right now but that doesn't stop him from feeling happy about this matchup. Before the Top 8, Sebastien said he wasn't afraid of any of the decks... except Bucher's. Bucher said he would rather play with Roux than Roux's quarterfinals' opponent, Timo Groth. So things are not looking good for the French.

Bucher couldn't repress a smile when he saw how dejected Roux was with his first hand. The French still came out fast with a turn two Sylvok Explorer, and a turn three Troll Astetic.

Manuel: "No third land?"
Sebastien: "I'm not THAT lucky."

The Swiss used Scrying to find his second Cloudpost, and a entwined Reap and Sow to find a third one while blowing up a Forest. Oblivion Stone swept the table and a turn later a new Reap and Sow entwined took out Blinkmoth Nexus. Thoren fetched the lone Plains.

The French was against the ropes. Although the Swiss had only one Solemn Simulacrum in play his five cards in hand promised a world of pain. Roux played Troll Astetic and passed the turn.

Another Scrying gave Bucher even more mana and he dropped the hammer: Tooth and Nail with entwine. Out came Darksteel Colossus and his bodyguard Leonin Abunas. The Fat Lady started clearing her throat, somewhere in the background.

The Colossus never got to attack. Manuel Bucher played an innocent Eternal Witness and Roux conceded, rather that get a second taste of the Tooth and Nail.

This time Bucher was the one taking a mulligan. His second hand was "not good". So he took another mulligan. The French came out with a second turn Tel-Jilad Chosen and then missed his third land drop. The third time he missed he cursed.

The Swiss found Sylvan Scrying and that gave him his second Cloudpost.

Thoren came in for Manuel and a turn later Manuel unleashed an entwined Reap and Sow.

The Chosen kept on swinging but Bucher found something to stop or race it: Plated Slagwurm. The French found his third land but he now had to think long and hard. A game down, he couldn't afford any sort of misplay.

He settled on Troll Astetic. Another Reap and Sow with entwine took away his third land.

Manuel: "I think you will hate this card after this game."
Sebastien: "This is worst than a circus." 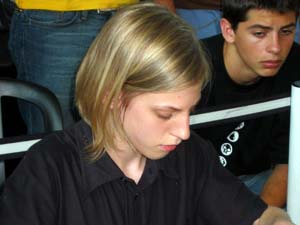 The French dropped Eternal Witness returning a Forest. Again Bucher gave him no room to work with: he dropped and used Mindslaver. When the dust cleared Roux had lost his whole team and missed another land drop.

The Slagwurm hit and Reap and Sow with entwine slowed the French even more. The Swiss played another Mindslaver and his opponent conceded.