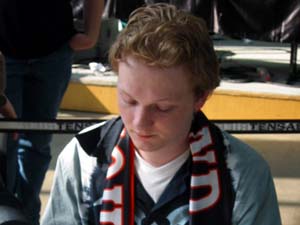 both dispatching their quarterfinals in an easy 2-0 sweep these two competitors found themselves two wins away from the GP Zurich title. Mattio was definitely playing the most interesting deck in the top 8. It's a Blue/Green deck he designed himself that tries to abuse Crystal Shard and various come into play abilities. His targets are Viridian Shaman, Solemn Simulacrum, Triskelion and the ever present Eternal Witness. He backs all that up with Condescends and Thirst for Knowledge to create what could well be the best control deck in the format. So far it's been working out quite well as Mattio managed to go an astonishing 13-0-1 in the swiss before winning his quarterfinals. It seems like Frank's Affinity deck has his work cut out for him.

Mattio won the roll and decided to play first. He chose to keep his hand while Frank was faced with a very tough decision. He had Vault of Whispers, Aether Vial, Frogmite, Arcbound Ravager, Atog, Arcbound Worker and Cranial Plating. If Mattio had Annul or removal for his Vial he would have to draw at least one more land to get some action and even then it wasn't the most explosive of hands. In the end though, he decided to keep anyway.

Mattio leads with an Island but Frank's Vial resolved. A Forest on turn two didn't solve the Vial problem and Frank could breathe a little easier. He did not find a land though and a second Vial got Condescended. Mattio then Oxidized Frank's lone Vault of Whispers and Viridian Shamaned the Vial. A Crystal Shard and another Shaman later, Frank was left without permanents and with no way to win the game. He tried his best, refusing to scoop in the face of double Crystal Shard and double Shaman but in the end reality won out over his stubbornness and Mattio took Game 1.

This game was easily the most interesting game of the series. Frank led with a Citadel and made his first play on turn 2 with an Aether Vial. Mattio got rid of it with a Tel Jilad Justice and Scried the two cards to the bottom of his library. Then he missed his third land drop. Frank tried to capitalize by dropping Ravager and Frogmite but the Ravager got Oxidized. The next turn the Frogmite met the same fate. It was replaced by a buddy though and a Disciple came out to increase the clock a little. A third Frogmite warranted an Echoing Truth from the screwed Mattio and he was doing surprisingly well for someone stuck on two lands.

On turn 7, Mattio finally found a second Forest and Eternal Witnessed up an Oxidize. Frank, in the meanwhile, had only managed a second Disciple and one of the bounced Frogmites as the other one was Annuled. The Witness traded with the Frogmite. Next turn Frank attacked with the two Disciples and a Blinkmoth Nexus but Echoing Truth and the recurred Oxidize made sure Mattio didn't take any damage again. Thirst for Knowledge got Mattio his fourth land on turn nine. At end of turn Frank finally activated his Aether Vial with two counters on it. Mattio winced as an Atog or Ravager would instantly kill him but it was a Myr Retriever. It got his beat on next turn and walked right past a freshly summoned Viridian Shaman to put Mattio at 5. His low life total made even a lowly Arcbound Worker a huge threat to the Italian so he had to Annul it and hope Frank didn't have anything better to follow it up with. Frank just sighed and said go. 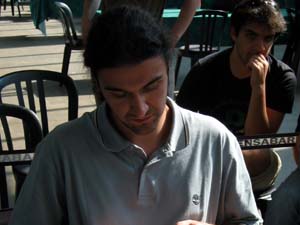 An Enforcer showed up a turn after to put a little more pressure on Mattio but a sixth mana source meant the Italian could finally deal with the Disciples in the form of Triskelion. It also staved of the Enforcer's attack long enough for Mattio to get Crystal Shard online with a Shaman, Witness and the Trike in play. From there on Frank's only out was to assemble a Vault of Whispers, Atog, Disciple of the Vault hand to go with his triple Darksteel Citadel, Glimmervoid board as that would give him exactly enough to drain Mattio out past his Annul. A desperate Thoughtcast didn't help him though and Mattio took the game after being stuck on two lands for the first six turns.

Game and match to Mattio