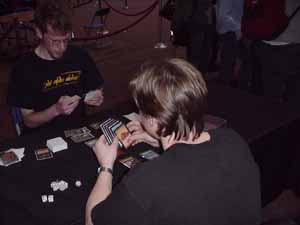 Matt Cory is the sole surviving amateur remaining in this tournament. He takes great pride in the fact that he has never played in a sanctioned limited tournament prior to this event, and his Top 8 appearance here may be a sign of things to come. Cory is with Blue-Red, while Aaron is with Black-Green, although his opening appeared to resemble monoblack.

Things were kept mysterious with two morphs from Cory on turns three and four, before Breider had about enough of things, and killed them both with Infest. Not to be outdone, Cory played his third straight morph in three turns. The possibilities ran through Breider’s head. His Vile Deacon didn’t quite feel up to the task of trading with Cory’s morph, and Sage Aven resembled the start of a string of things to come. Vile Deacon number two made Cory wince. One died to Shock, but the other continued to serve. Embalmed Brawler, amplified once with a joining Nantuko Husk came into play to give Breider the board advantage. Cory, knowing his next draw steps, did not have much to look forward to. Solar Blast took out the second Vile Deacon, but he still needed an answer to the Husk.

The beatings just kept on coming from Breider, with a Toxin Sliver. Sage Aven stood in front of the Nantuko Husk in an attempt to kill off another one of Breider’s creatures, but he would have none of that, cycling a Primal Boost to take down the Aven. Cory played a replacement Aven, which would give him the gift of Goblin Taskmaster, Keeneye Aven and Pinpoint Avalanche.

Breider’s savagery continued with a Wirewood Savage and a morph. His attack was impeded by Cory’s morph and Aven- the Aven blocked the Husk while the morph blocked the Sliver. Before damage was put on the stack, both players had effects. Breider sacrificed his morph to the Husk, while Cory unmorphed an Ascending Aven. His rejoiner was yet another morph and a Thoughtbound Primoc, which double-blocked the incoming Embalmed Brawler on Breider’s next attack. The Brawler killed the morph, earning sighs of disappointment from Breider when he discovered it was just a lowly Goblin Taskmaster.

Next turn, Breider served yet again, but fortunately, Cory had planned his last Aven just right. When the Thoughtbound Primoc blocked the Nantuko Husk, Breider sacrificed his Crypt Sliver whereby Cory’s planned Pinpoint Avalanche took care of it while the pump was on the stack. Keeneye Aven joined in next, and Cory managed to steal the game in one of the more impressive examples of future planning and decision making I have seen so far in this tournament. 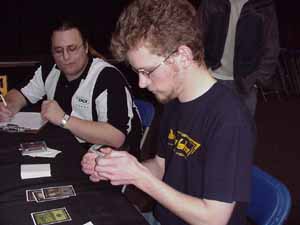 “We had such an exciting game just then, and the crowd is still over there?!” Cory exclaimed, in reference to the crowd that was surrounding the Kibler-Zajdner semifinal match, compared to the lone spectator over on this semifinal. After a mulligan, Breider bought out a Crypt Sliver and followed it up with a Wirewood Savage. Cory, on the other hand offered up some defense in the form of a Thoughtbound Primoc, which resulted in the following exchange:

Seriously, how many of you out there remembered that the Thoughtbound Primoc is in fact, a beast? (Oh yes, but on Magic Online, they always remind you…)

Embalmed Brawler, amplified once provided some means to break through the Primoc, while Stonewood Invoker and Shepherd of Rot presented additional options to Breider. Cory played out one of his Sage Avens, seeing Master of the Veil, Pinpoint Avalanche, Riptide Entrancer and Voidmage Apprentice, in that order. With the life totals in Breider’s favour, Cory was starting to feel the pressure from the Shepherd of Rot. Breider attacked with the Brawler, which brought Cory some deep analysis of the situation. He put his mouth where his money is, with the exclamation, “I’m worried about the Pimal Boost in his (Breider’s) hand.” Fortunately for Cory, Breider held just Vile Deacon and Swamp.

Breider attacked with the Vile Deacon, which became a 4/4. It traded with two of Cory’s morphs, one of which was saved when it was flipped to reveal Master of the Veil. Cory’s next morph then hit play. 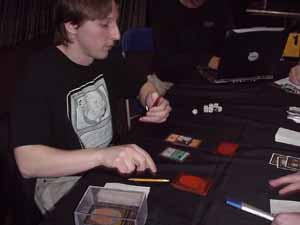 Breider hit land number eight and swung with the Stonewood Invoker. Cory blocked with the Master, to which Breider pumped the Invoker. Fortunately, Cory had planned for this situation, and had a Solar Blast at the ready to take down the Invoker before it, well, grew. Now it was time to try and take the game. Unmorphing Ascending Aven, Cory decided to race through the air, sending in both the Ascending and Sage Aven. When Breider attacked with his Wirewood Savage, Cory went on to demonstrate his mind-reading skills:

“Okay, which one is it? Primal Boost or Infest?”

Calling Infest, he used his morph to block the Savage. When the two creatures traded, Cory was convinced.

Skills like this makes up part of what brought Cory up to this point in the tournament. Cory has certainly proved that he has the skills to flip cards with the very best, earning a much deserved spot on this Top 8, and his play reflected it. This was evident when he made his final morph of the match- the Voidmage Apprentice, ready to counter the saving Infest that he had correctly predicted in Breider’s hand. It’s Cory onto the finals to face the winner of the Kibler-Zajdner semifinal.