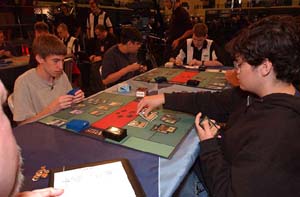 Anderson opened with a turn 1 Basking Rootwalla and pumped it up to attack on the following turn. That set the score at 18 to 17, as he was forced to operate off a Karplusan Forest. Chambers summoned a turn 1 Bird and enchanted his Forest with Squirrel's Nest on turn 2. He gained further advantage on the board by summoning Wild Mongrel on turn two and casting yet another Bird.

Fact or Fiction yielded Wild Mongrel and a land for Anderson, putting three more lands in his graveyard, and getting him closer to Threshold – which would help make the Nimble Mongoose he summoned bigger. Anderson cast Wild Mongrel of his own. On the next turn he Repulsed an Elephant token made by Call of the Herd and swung with his team.

The following turn was crucial. Chambers tried to cast Opposition, and Anderson Counterespelled with three lands untapped. Anderson then pitched his hand – Flametongue Kavu and two Deep Analysis to Wild Mongrel in order to get more cards in his graveyard than the number of lands his opponent had untapped, then cast Circular Logic – the last card in his hand. Anderson cast Memory Lapse on the Logic! To drive the nail in the coffin of this game, he also cast Standstill on his next turn, and attacked with a superior creature force in play. Chambers had no choice but to allow the match to proceed to game 2. 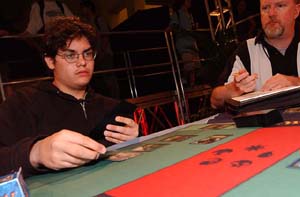 Anderson began the game with a turn two Nimble Mongoose. Chambers, who played first, cast Call of the Herd on the following turn. Anderson cast Flametongue Kavu to take out the token and attacked with the Goose. Chambers summoned Llanowar Elf and cast another Call of the Herd from his hand, only to have the new token taken out by the second Flametongue. Rapidly calling behind, he recast one of the Calls out of the graveyard and summoned another Elf. Andeson used Fire to take out both Elves and traded one of the Flametongues for an Elephant token in combat, bringing Chambers down to eleven life points.

Chambers cast a Flametongue Kavu of his own, taking out Anderson's. Anderson, who had Basking Rootwalla, Wild Mongrel, and Nimble Mongoose in play, attacked with the first two. Chambers tried to summon a Wild Mongrel, but lost a counter war over it, with Anderson reaching Threshold in the bargain. Main phase Fact or Fiction yielded Spellbane Centaur and Repulse for Anderson. He brought his opponent down to five life on the attack and summoned a second Nimble Mongoose with his remaining Forest. Unable to deal with these threats, Chambers was forced to concede Game 2.

Anderson
Out: 2 Stupefying Touch
In: 2 Repulse

Each player had a first turn play, Chambers opening with Llanowar Elf and Anderson with Basking Rootwalla. Merfolk Looter was up nest for Chambers, providing a perfect setup for Anderson who cast Fire to take out both creatures. Chambers retaliated by using a Fire of his own on Basking Rootwalla, then cast Opposition with no creatures in play.

Neither player was drawing creatures, so "draw, go" were the words heard over the next few turns. Chambers finally drew Birds of Paradise. Anderson was holding a Flametongue Kavu, but chose to save it until a better target comes along. Sure enough, Chambers cast Call of the Herd, providing a juicy Elephant for Kavu to spit some flame at. He also summoned a Wild Mongrel. Anderson used Repulse to take out the Elephant Token and summoned Flametongue Kavu targeting Wild Mongrel and getting his opponent to discard a few cards to save it.

It was Anderson's turn to be on the ropes here. Chambers summoned a Flametongue Kavu of his own, taking out Anderson's only creature. Anderson summoned Spellbane Centaur and a Nimble Mongoose and traded Centaur in combat for the Kavu.

With two Birds of Paradise and Wild Mongrel in play, Chambers' Opposition was working full time for him. Mongrel was racing against the Goose and his Birds were tapping down Anderson's only Forest. Anderson Repulsed a Wild Mongrel and summoned another Spellbane Cenatur. With Chambers at 6 and Anderson at 7, this was still anyone's game.

Another Repulse that Anderson top-decked on his draw step sent Wild Mongrel back to his hand again, winning a permission war over that. Chambers used Fire to take out the Centaur and went down to three points of life. Stupefying Touch made Wild Mongrel unable to pump next turn, forcing Chambers to chump-block with one of his Birds. Chambers cast Deep Analysis hoping to find some answers. He cast another Bird. Impatient for the win, Anderson chose to counter it and leave his opponent with one less blocker.

The last Bird went down in the next attack step, and Anderson cast a Wild Mongrel of his own. Chambers drew Call of the Herd and made an Elephant. He used his Stupefied Mongrel to tap down Anderson's. Anderson chose not to attack with the Mongoose. On his turn, Chambers finally was able to counter-attack, sending the Elephant token into the red zone. Anderson used his Wild Mongrel to put Basking Rootwalla into play, blocked, and pumped. Chambers recast Call of the Herd from the graveyard and cast another one out of his hand, finally gaining an advantage on the board.

He attacked with all three of his creatures. Throughout the last several turns of the game, the only card in Anderson's hand was Aura Graft. Chambers outmaneuvered him there by boarding out all of his Squirrel's Nests. Anderson checked with the judge to find out that he does not indeed get to draw another card if he moves Stupefying Touch onto another creature with Aura Graft. Out of options, he let the match proceed to Game 4. 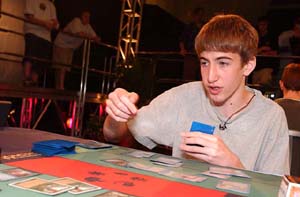 Wild Mongrels were summoned on both sides of the table. Anderson attacked with his, gaining card advantage by discarding a Basking Rootwalla to his Monger while Chambers discarded Opposition. With damage on the stack, each player discarded a land to save their dogs. Chambers summoned a Merfolk Looter and used Circular Logic to counter Fire. This left him unable to stop a Flametongue Kavu, which took out Wild Mongrel. Looter traded in combat with Basking Rootwalla, and another Mongrel Chambers summoned blocked Anderson's Mongrel. Anderson pitched Basking Rootwalla, and Chambers pitched Circular Logic to counter it. Both dogs became 3/3 and neither player chose to discard more cards, letting them die off.

Anderson ended the turn with summoning Spellbane Centaur. Chambers drew a fourth land and summoned Jade Leech, able to slow down his opponent's onslaught. Main phase Fact or Fiction yielded Standstill and Wild Mongrel for Anderson. He cast both. On the following turn he attacked with all of his creatures and discarded several cards to Wild Mongrel bringing Chambers down to three life points. As he would die next turn to the remaining two creatures attacking, Chambers was forced to break Standstill to cast Call of the Herd. Anderson countered, ending the game and match.