Before the match between Antarctica and Huey, Ben and Casey, the experts were saying that Billy 'Baby Huey' Jensen and Dan O'Mahoney-Schwartz would win their respective match ups, with the remaining one pitting Steve OMS against Casey McCarrel being the decider. They were mostly right. 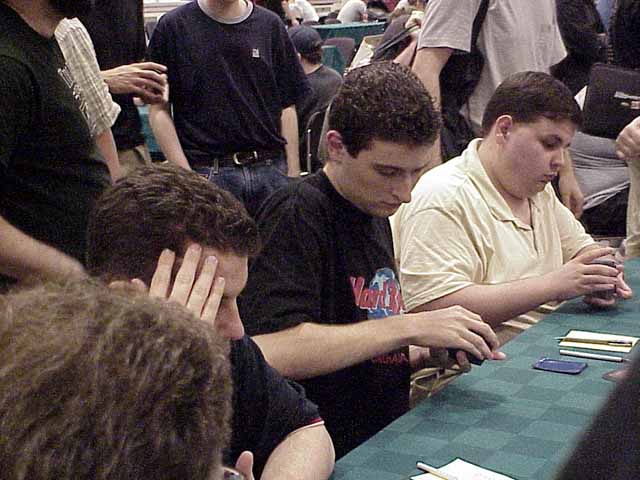 The match between Baby Huey and Jon Finkel was a fast one. With Finkel's opening hand causing him to proclaim 'I can win! I can win!' Huey started out with a couple of small creatures before Jon played Blastoderm. Despite the prescience of the untargetable 5/5 however, Jon was unable to do anything about the numerous creatures Jensen played. Finally, with Jon trying to break through with his Green fat, Huey missed the fact that he could have attacked with his Eagle and then recast it, but it didn't matter as Huey's swarm attacked for the victory. 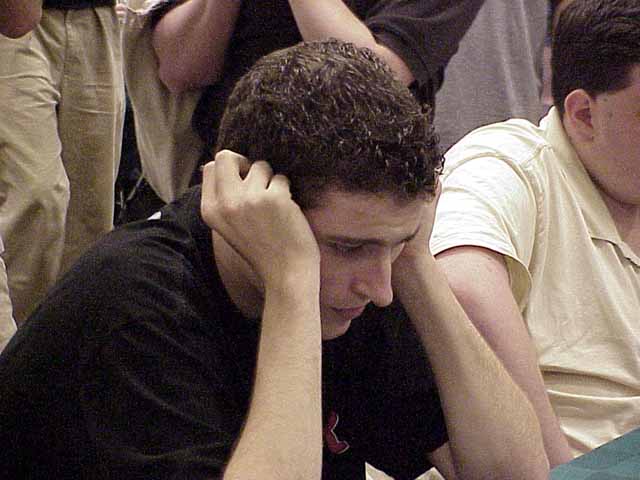 Game two started slowly for Jon, with Ridgeline Rager and Wandering Eye being cast before Finkel's first creature, a Woodripper. The Wandering Eye combined well with the control elements of Huey's deck, and when Finkel played Lure on his zero-counter Woodripper, Huey returned it to his hand, with the Eye providing him the information he needed to know he could attack for the victory. To the amusement of the spectators, Huey and Jon played four more games, all of which Huey won before DanOMS and Ben Rubin started their second game.

In the SteveO vs. Casey McCarrel match, things started out well for Antarctica. With Casey stuck at two lands, Steve fist played a Sergeant, then a Lieutenant, and after they were removed by Steal Strength and Vendetta, a Stinging Barrier hit the table. Then, with Casey never drawing a forest, Steve Played Alexi, Zephyr Mage and won a few turns later.

Game two saw the re-emergence of the once-dormant McCarrel. With Steve gaining total board control at seven life with Belbe's Armor, Avenger En-Dal and Alexi, Casey played a number of creatures, including Bog Elemental and Battlefield Percher. With Steve lacking offense, Casey got aggressive, attacking with everything, bringing Steve to two. With Steve having six lands in play, Casey again attacked with everything except his Agent of Shauku, with Steve tapping two lands to use the Armor, making Spineless Thug 0/4, and used three mana to activate the Avenger En-Dal. With Steve only having one untapped land, three creatures and no Foils or Thwarts in his deck, Casey knew he'd won, dropping a Stronghold Discipline onto the table, with the players then going to game 3.

Unfortunately, the tiebreaker was anti climactic. With Steve stabilizing with Trenching Steed and two Troubled Healers, Casey began stockpiling creatures, playing such fatties as Silverglade Elemental and Spitting Spider. Steve could only answer these continued castings by playing land after land and when Casey was able to start attacking things looked grim. The capper came when, with Steve down to 4 lands and 3 life, Casey cast Despoil, with the result being Steve's inability to cast anything or prevent enough damage.

Casey's victory sealed the match result, with the final score 2-0 for Huey, Ben and Casey, with the match between Rubin and DanO ending between games two and three at one apiece. The three former members of the Jumble, who have been working the Antarctica since before nationals, now go on to the final to face Dark Side of the Moon.