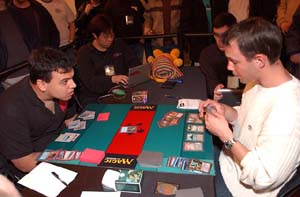 Justin Gary, and the Your Move Games team, have been working on this match-up the whole day. I tried to watch a couple of the games, with a few other big American names chipping in some ideas, but got a very cold stare that seemed to indicate the presence of near strangers, with Sideboard badges, was not welcomed.

Antoine Ruel, on the other hand, has been fighting all day in the Pro Tour. He is probably a lot more tired than the American but $15,000 matches have a way to get your adrenaline going.

They both felt they would have a good match-up if Witt could get past Budde in the other semifinals.

Antoine had to take a mulligan and they were of to the races. His first land met Wasteland as Gary tried to exploit a possible bad hand. Little did he know Antoine had a hand full of lands and little else.

They played "draw, go" for the first few turns until Justin Gary played a Brainstorm to fix his hand. The French returned the Wasteland destruction by blowing up Tundra and they resumed their poker face stares.

This is a match-up built on counter wars so bluffing is a rather important part of the game. Justin tried to use Gaea's Blessing to get Wasteland and two Brainstorms back but Ruel was willing to spend a counter on it.

The second Blessing turned into a "two Counterspell and Brainstorm" stack before resolving. Ruel tried to play Pernicious Deed but Justin Gary had the Force of Will to stop it.

Since Antoine didn't try to protect his spell the American felt confident enough to cast Fact or Fiction. Ruel agonized over the cards before coming up with the following piles.

Gary reached out and grabbed the first pile, especially since he already had one Oath in hand. He untapped and went for the throat: Morphling.

It was clear Antoine was out of counters but he did play Shadowmage Infiltrator hoping Gary would tap out to counter it so he could Sword Superman away.

The first one resolved so he tried the second one. Again, Gary fought back and forth with the cards in his hand trying to figure out the best option. He let it resolved.

At the end of the turn the American tapped out to play Impulse and Antoine Ruel seized the opportunity. Sadly for him, the American had Force of Will waiting for it. The French smiled although he was in deep trouble.

The $15,000 - well at least in this first game - question was: could two Finkels find a way to stop one Superman?

Justin Gary stared at the Spike Weaver, Oath of Druids and Swords to Plowshares in his hand. His opponent was tapped out with two cards in hand, having allowed a long series of big spells in the previous turns. So he probably didn't have the Force of Will.

The Morphling attacked and Gary played the Oath. The two Finkels tried to find an answer in the Red Zone. Impulse and Brainstorm later Ruel had the Deed but no counter to protect it. He also had Impulse, Tithe, Brainstorm and Fact or Fiction. So he decided to wait it out.

He played Tithe to thin out his deck, while the Dutch contingent cheered as Alexander Witt took the first game from Kai Budde in the other table.

Back at this table the French continued his card drawing ways with another Brainstorm having finally found a counter: Forbid. He then played the fourth search spell of the turn: the second Impulse.

Justin: "That is a lot of searching."

The French's hand was now completely rebuilt. He passed the turn and Justin Gary Oathed out a second Morphling.

Justin: "There you go. That is how you play this game."

A Brainstorm returned the Spike Weaver in his hand to the top of the deck. The Finkels netted Ruel Force of Will and Swords to Plowshares. After pilling up his lands the French played Call of the Herd before passing the turn.

On Gary's upkeep Antoine tried to Sword his own Elephant to stay alive. Two Counterspells and two Force of Wills later it resolved leaving the French at twelve with Forbid in hand, facing two Morphlings with Deed.

Another swing brought the French right back to two. Antoine Ruel needed an answer and he needed it really fast. Gary Sworded one of the Finkels going down to one card to stop the French from drawing an extra card.

Antoine Ruel took a deep breath and played his last hope: Pernicious Deed. It resolved. He had enough mana to blow up everything, which he gleefully did. We were back at square one. Or almost, since Antoine Ruel was at a measly three.

The American Impulsed for extra fuel and had to decide between Spike Weaver and Treetop Village. After consulting the graveyards he chose the Weaver while Budde and Witt shuffled for the third game.

In came the Weaver and Ruel drew Call of the Herd. Still he played out the Flashback on the one in his graveyard keeping the card an extra card in his hand. 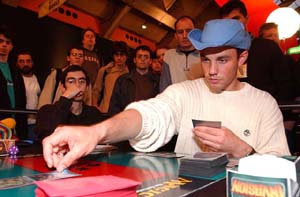 Since Gary was down to the one card he had in hand during all the key turns Antoine was happy to play Gaea's Blessing with no protection. He got Impulse out of that one.

Gary Wastelanded one of the three remaining lands and played Powder Keg. Now Antoine Ruel didn't have enough mana to play Forbid. He tried to Impulse in desperation but came out empty.

Antoine took out four Swords, one Force of Will and one Impulse to bring in three Diabolic Edicts, two Hydroblasts and one Duress.

They both asked for water after just a long and tense game. As they shuffled, the Dutch exploded in a wall of noise as Alexander Witt won the other semifinals.

Justin: "I feel very confident about that match-up. Suddenly this wasn't the semifinals. It feels just like the finals. Obviously a lot of things can happen but I think both of us have a great match-up against Witt."

And yes, in case you found the timeline awkward, they did finish three games in the same time these two finished two. Control decks have a way to drag out the games, especially with no time limit.

They both kept their hands and on the second turn Justin Gary played Sylvan Library. Two Force of Wills later, with Gary removing Morphling, it had resolved. Since this a Control match Justin Gary could afford to pay the four extra life several times with a lot of security, apart from the usual tricks with Flooded Plains and the like. So the Library was very important.

On the first chance he paid four life but lost a card to Duress on the following turn. Worst of all he had to push his only Oath to the bottom after trying to Impulse for a way around the Duress. He showed Ruel a hand full of lands and Pyroblast.

The French now knew Justin Gary was desperate to draw something. In fact the American paid an extra eight life on the following turn to get another Pyroblast, Counterspell.

Feeling secure Ruel played but as you now know Justin had the Counterspell for it. When the American went for the end of turn Impulse Antoine played Fact or Fiction. One Pyroblast and Hydroblast later it resolved.

Antoine took the second pile. The Impulse resulted in Call of the Herd. Justin's Treetop started attacking and an elephant token made it into play. The French played a Deed to slow that offensive strike force.

Gary tried to use Gaea's Blessing to cycle back two Impulses and Counterspell. A Counterspell put an end to that plan. The Deed clean away the table and Justin flashbacked the Call.

When the American attacked Ruel used Diabolic Edict. The token took one for the team and the Village brought the French to ten. It hit one more time and as Antoine begged his deck for a Call he got a good answer: Wasteland.

The problem was Justin Gray had two Villages. The Wasteland could only hande one. He drew and played Impulse getting Diabolic Edict and Fact or Fiction. Despite being at four he chose the Fact or Fiction and almost tapped out to play it. 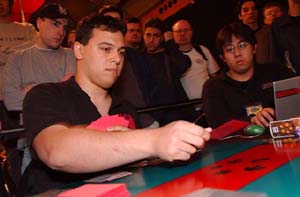 Obviously he took the second pile. Justin Gary played his own Fact or Fiction as well.

Pile one: Thwart, Pyroblast, and Wasteland.
Pile two: Call of the Herd and Flood Plains.

He took the second pile as well. Antoine tried to play Pernicious Deed but lost the counter war in a game that had slipped out of his grasp.