Brad Nelson is an absolute machine. He has two Top 8 (and one ninth-on-tiebreakers) finishes across just five Pro Tours, a Sunday appearance at U.S. Nationals, a Grand Prix title, and a reputation as one of Magic Online's most fearsome ringers. His deck this weekend is the Treehouse deck championed by recently-announced Hall of Famer Brian Kibler, and his testing group consists of some of the best Magic players alive.

So his opponent has got to be the underdog scrapping for the upset, right?

Marijn Lybaert has averaged one Pro Tour Sunday per year since his breakout season in 2007, and his team, featuring a host of European all-stars like Frank Karsten, Jan Doise, and Christophe Gregoir, consistently sideswipes the field with decks like the Mirror Entity-fueled Elves combo deck from Pro Tour-Berlin and Lybaert's own R/G Land Destruction deck from Pro Tour-Hollywood. Furthermore, coming off a fresh Top 8 just last week at Grand Prix-Gothenburg, he has some momentum. Most importantly, though, with a win over Guillaume Wafo-Tapa in the previous round, he finally broke the Quarterfinal Curse that had afflicted him across his previous Top 8s; a win over Nelson today would help him finish the job.

Nelson led with a first-turn Treetop Village, while Marijn had only an Island. Nelson's second turn yielded a Treefolk Harbinger for a Nameless Inversion, as well as a Murmuring Bosk that entered the battlefield tapped.

Marijn spent his second turn casting Spreading Seas on Murmuring Bosk, which put quite the hurt on Nelson's tri-color manabase. The damage showed, as Nelson merely attacked Lybaert for 3 with Treetop Village on his third turn and passed. Lybaert, meanwhile, mustered a Merfolk Sovereign. 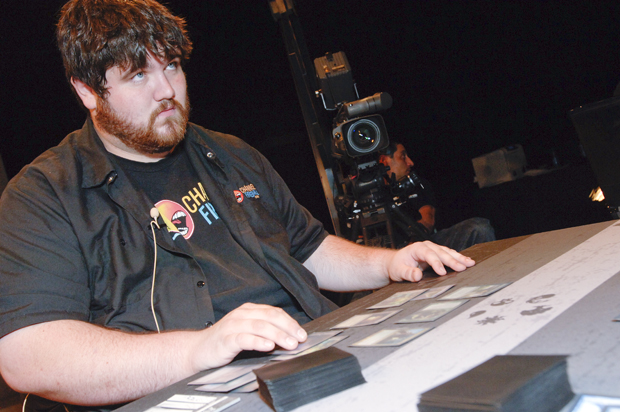 Brad Nelson is no jokes.

Nelson had two more Bosks in succession after Spreading Seas, however, and Doran came thundering onto the battlefield on turn four. Nelson attacked with Harbinger, and the life totals stood at 17-14 in his favor.

Lybaert matched Doran with a Lord of Atlantis and a Silvergill Adept. He declined to attack and passed the turn with three creatures on defense. Nelson untapped and sent with the team, threatening the Nameless Inversion he had tutored for earlier in the game, and Lybaert's life total crumbled to 6. After the attack, though, Nelson found himself thinking hard. Lybaert's forces potentially represented a lot of damage even at Nelson's high life total, and he didn't want to take too much from his lands. Still, he tutored up a Bosk with a Misty Rainforest, cast Nameless Inversion on Lord of Atlantis, and cast a Putrid Leech, going down to 14 from the sacrifices and the Bosk.

Now it was Lybaert's turn to dive into the tank. He cast a Cursecatcher before combat, made his Adept unblockable with Merfolk Sovereign, and took Nelson down to 12. The reason for his aggression became clear on Nelson's next combat step, when he used Cryptic Command to tap Nelson's creatures and draw a card. Nelson had another Treefolk Harbinger to play defense, though, and after drawing a card for the turn, Lybaert conceded.

"I screwed up," Lybaert said after the game. "I should have attacked with Sovereign when I played Lord." Because Spreading Seas made Nelson's Bosk into an Island, Lybaert's Sovereign would have actually been unblockable due to Lord of Atlantis.

The two players examined their sideboards.

"So what are you bringing in?" Nelson asked.

Marijn kept his opening hand for game two, while Nelson was forced to mulligan. He kept his six.

Lybaert started off with a Celestial Colonnade, while Nelson tutored up a Bosk with Treefolk Harbinger. On his second turn, Marijn once again had a Spreading Seas but it hit Nelson's Forest instead of Murmuring Bosk this time around. The Seas didn't stop Nelson from casting a Tarmogoyf, though, off a fresh Bosk that revealed Nameless Inversion.

Lybaert's third turn featured only a Mutavault and a pass, while Nelson played a Swamp and held back Tarmogoyf (it was only a 0/1). Finally, though, things started happening. Lybaert cast Merfolk Sovereign into Nelson's Nameless Inversion which grew Tarmogoyf all the way to 3/4. Nelson untapped, attacked, and cast a 3/3 Knight of the Reliquary.

Lybaert wanted to get into the big creature game too, though. He dropped a Coralhelm Commander and leveled it to three, but Nelson had the Slaughter Pact.

Nelson crashed in with the Tarmogoyf, played a land, and passed the turn with Knight of the Reliquary untapped. Lybaert played a sixth land and attacked with Celestial Colonnade; Nelson's Knight fetched a Treetop Village on Lybaert's end step. Another Knight hit the table and Nelson attacked, bringing Lybaert to 8. When Nelson activated the first Knight to fetch a fresh Forest and cast a Tarmogoyf, Lybaert decided he had had enough and conceded the game.

"What's the score?" asked Paul Rietzl from the adjacent table.

"I did it last round," Nelson said.

"Well, I went four Pro Tour Top 8s without getting past the Quarterfinals, so one thing at a time I guess."

"Wait, when was your first Top 8?" Nelson asked.

"Wow. I was just a little kid back then!"

Yes, once upon a time, even Brad Nelson was a wee lad.

"Why now?" Marijn voiced aloud as he stared at his opening hand.

"I'll mulligan, but I know you're mulliganing too."

He kept his six, though, and played a Wanderwine Hub tapped. Nelson revealed a Nameless Inversion to Murmuring Bosk and cast Loam Lion. Lybaert had a Mutavault on the second turn, but Nelson had another Bosk (revealing the same Nameless Inversion) and a Tarmogoyf. 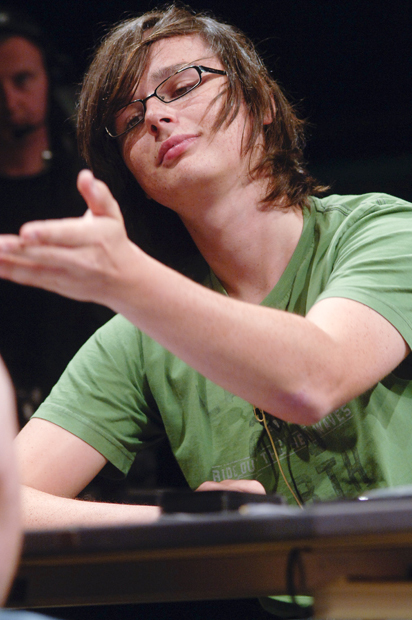 Marijn Lybaert ships it back

"Are you real?" Nelson asked. He untapped and attacked, then played a Reflecting Pool.

Nelson untapped and found the Misty Rainforest. He searched up Murmuring Bosk, revealing the same Nameless Inversion, and cast Knight of the Reliquary before passing the turn. Marijn attacked with the Sower and the Tarmogoyf, leaving the life totals even at 14. He followed up the attack with a Merfolk Sovereign.

"Infest would be good here," Lybaert said, and passed.

"Not looking too good," Lybaert said. He turned to the cameraman who was making his way over to the match. "Don't cover me! I am going to lose!"

Despite being on the ropes, Marijn mustered a pair of Lords of Atlantis before passing the turn. Nelson had two removal spells, though, and with Tarmogoyf and a Knight of the Reliquary online, Lybaert decided it was time to pack it in. 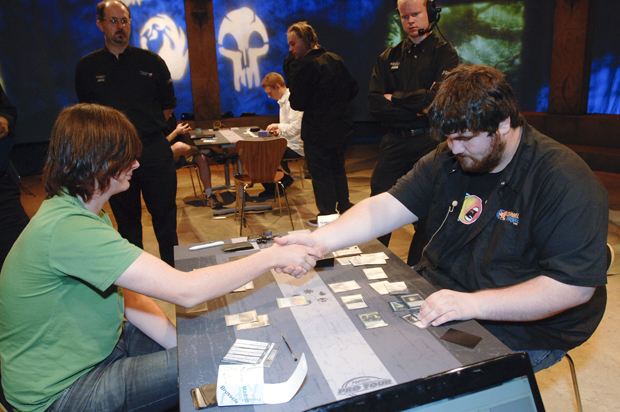 Brad Nelson defeats Marijn Lybaert 3-0 to advance to the Finals!