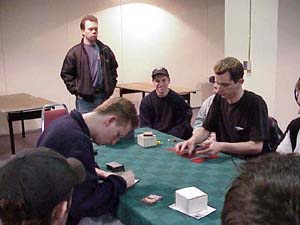 Matt Vienneau and Bob Maher immediately agreed on one thing as soon as he sat down at the table: the sweet spot at the draft table is to Huey's left! Billy Jensen hooked up Maher with a sick black/red deck at the last draft table during the Swiss, and Jensen hooked up Vienneau with red/black/blue at the Top 8 draft. Vienneau and Maher talked trash for most of the match - Maher insisted that Vienneau should concentrate on his cards or else his play might get "even worse." Matt retorted that that's "not possible." Maher acknowledged that Vienneau does have his number in tournament matches - Vienneau even beat Maher in Tokyo after Vienneau switched his red/black on red/black mirror match sideboarding strategy to the one Maher had used to beat him in game 2!

It was déjà vu for Maher when Vienneau played turn 5 Thunderscape Battlemage wit the kicker on turn 5 of game 1. Vienneau followed up with Plague Spores on Thunderscape Apprentice and forest. Since Maher had also mulliganned once, his red/green beatdown deck didn't have a lot of gas left. However, Vienneau had given him a bit time to recover by tapping out for Plague Spores instead of attacking while Nightscape Battlemage could still give first strike to his assorted grey ogres and later leaving Duskwalker back to play defense when first striking grey ogres would once again have done just fine. Vienneau did show off some technology when he used his apprentice to put the Battlemage back on top of his own library so he could clear out Bob's hand - the last card was an Agonizing Demise. Apparently, Matt plays that apprentice just for its blue ability.

Vienneau made another "trademark mistake" when he played Soul Burn for 1 on Thunderscape Apprentice and Maher just used its green ability to pump itself up to 2/2. Both players commented that Maher was surely screwed now because Vienneau's reputation is for playing badly but winning anyway. Vienneau finally got rid of Apprentice by Recoiling it then putting the Battlemage on top of his library again and finally knocking it out of Maher's hand. he had to tap an additional mana to set up a regeneration shield on his familiar since he tapped too much mana for his Battlemage, but the 1/1 was finally dead. Huzzah! With Vienneau tapped out for no good reason, Maher swarmed him, killed three creatures each, and got Vienneau down to 10. When Vienneau cast Probe (no kicker, since Maher had no cards) and discarded Rushing River and Soul Burn because those were his bad cards, Maher was quite dejected. Magma Burst is so good that even Matt Vienneau can't screw it up. (The other card he kept was Shivan Emissary.) 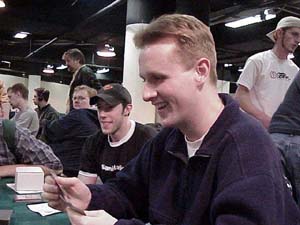 These are trained professionals, ladies and gentlemen, don't try this at home.

Maher came out fast and furious in game 2. He was still visibly upset about losing game 1 and slammed Thornscape Familiar, Pincer Spider, Horned Kavu, Yavimaya Barbarian, and Elvish Champion onto the playing surface over the opening turns of the game. Vienneau's board when he started his fifth turn was a lonely Lava Zombie. Shivan Zombie rejoined it and then maher sent in an alpha strike. I could see what Maher was thinking too - "will Matt notice that Yavimaya Barbarian is an elf?" It looked like the answer might be "no" when he pushed Lava Zombie in front of it, but Vienneau used Rushing River to bounce the Champion, kill the offensive elf, and buy himself some time to stabilize. With Maher's hand empty once again, Recoil killed Horned Kavu. Maher just kept sending his team and summoning reinforcements. With Vienneau down to 4, Maher summoned a second Slingshot Goblin, giving him 3 2/2's in play to Vienneau's Lava Zombie. A Soul Burn dispatched the Champion and gained Matt one precious point of life, but Maher promptly top-decked Gaea's Might (worth 3 since Maher had one of his Swamps in play - he, like Huey, likes to splash "banishings" into red/green) and evened the match at a game each.

The players were silent as they shuffled up for the deciding game 3. They traded Maher's creatures for Matt's removal for a few turns and Matt finally seemed ready to use Nightscape Apprentice's red ability, but then Maher dropped Meteor Storm. With three creatures in play to Matt's 2 and Vienneau still at 14, the Storm wasn't quite game-ending, but it did look pretty good. Maher had one card left in hand when he played it, as did Vienneau. Vienneau's card was a good one, though - Magma Burst. That ruined Bob's side and when Matt topdecked Lava Zombie, Meteor Storm could no longer win Bob the damage race. A Plague Spores then got rid of Bob's only creature and only forest and suddenly he couldn't even activate the Storm. A couple turns later, Matt was rubbing his eyes in disbelief and Bob was scooping his cards up in disgust. 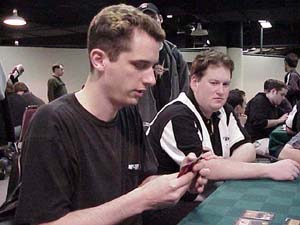 I'm sure Maher will try to get into some money drafts tonight to get the taste of this match out of his mouth before he stops playing Magic for a few weeks in order to get married and go on his honeymoon.

Vienneau complimented Maher on "doing the same thing to me that Benafel did. He was chatty and I tried to ignore it, but he's such an engaging personality that I couldn't and that distracted me." Maher elaborated "yeah, once the crowd starts laughing it's really hard not to talk."