Semifinals: Both Green – In More Ways Than One Bastien Perez and Jan-Moritz Merkel fight for the Finals.

to Semifinal number two, which will feature two European teenagers playing decks with green in them (a much-derided color coming into the weekend) for a spot in the finals. Bastien Perez is sitting here after demolishing Kenji Tsumura and his white weenies in the quarters, mostly on the back of Tromp the Domains and Empty the Warrens. Jan-Moritz Merkel had to beat a Japanese superstar of his own to get here, taking down one-time Tsumura teammate Tomoharu Saito - an especially impressive feat for a player attending his very first Pro Tour. In fact, all of the stars in this Top 8 fell in the quarters, leaving the door wide open for one of these two to become Magic's newest poster boy.

Perez led off the match with a suspended Search for Tomorrow and then Goblin Skycutter. Merkel was doing just fine, suspending his own Errant Ephemeron on turn 2. Over the weekend, it was interesting to note that most players, during deckbuilding, were placing their suspend cards at the suspend point in their curves, so cards like Durkwood Baloth and Ephemeron are being counted as one- and two-drops, a refreshing display of optimism from the often-cynical professional scene. Of course, many games it does replace the creature you'd normally cast on turn 2, so there's certainly a method to the madness.

Perez's Skycutter got in for two but a turn later met an unmorphed Fathom Seer, as Merkel set himself back two early turns of development in favor of drawing two extra cards. Perez followed up his attack by casting Herd Gnarr, and then Phantom Wurm a turn later, his fatties now looming menacingly over Merkel's Looter il-Kor and lowly Fathom Seer. A rawdogged Empty the Warrens from Perez let Herd Gnarr get big again, dropping Merkel to 8, and Tromp the Domains earned Perez a kill the turn later. Merkel started a bit better in Game 2 than he did in Game 1, putting a face-up Coral Trickster into play on turn two and a morph on turn 3. Perez was doing alright himself, casting Gemhide Sliver and Wormwood Dryad, but Mystic Snake on a Thallid Germinator was a bit of a bother. Perez would go on to do nothing further this game and fell quickly under an Onslaught of men from Merkel.

Merkel mulliganed for Game 3 but still suspended an Errant Ephemeron on turn 2. Perez again pulled off the suspended Search for Tomorrow into turn-three Empty the Warrens start before playing a Wormwood Dryad and then Ironclaw Orcs, and for the first time in the match we seemed to have a real game. Merkel cast a morph, then Herd Gnarr, and then another morph, trading jabs with Perez via the Gnarr while getting popped back with the Dryad and the Orcs. A Phantom Wurm for Merkel plus the now-lively Ephemeron let him push the aggression, smashing Perez to 10 and killing a Goblin token. Perez counterattacked with his evasion and made the life totals 10-7 in his favor, but it was clear that he was flooding a bit on land and had a razor-thin margin for error. Merkel was able to use Coral Trickster to stave off a turn of Dryad beats while continuing to add creatures to the board, and that was enough time to attack for the win, putting Perez on the brink of elimination. 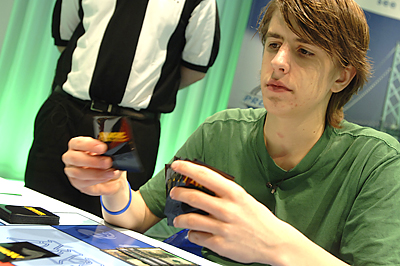 Perez sighed deeply when he was forced to mulligan his opening hand in Game 4, keeping the six-card hand but reacting as if it was lacking as well. To make matters worse, Merkel hit his curve on turns two, three, and four, putting Looter il-Kor, Prodigal Sorcerer, and Herd Gnarr into play. Perez wasn't without some action, playing Wormwood Dryad on turn 3 (Prodigal Sorceror got it a turn later), a Herd Gnarr of his own, and another rawdogged Empty the Warrens. Unfortunately, that was it for him, while Merkel pushed the peddle to the floor with Call of the Herd. Perez simply shrugged and extended his hand, congratulating Merkel on his trip to the finals.