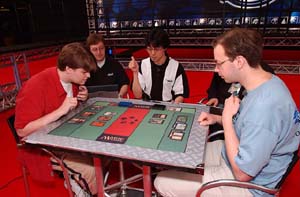 This is a first Pro Tour top 8 for Bram Snepvangers but he has already made Tour history by defeating Kai Budde on Sunday. Now he wants to see just how far he can take it. Davis is hoping to match or outdo his performance at Pro Tour-Chicago 1999 where he lost to Bob Maher in the final match.

Both players had some early creatures to cast, with Davis summoning a Mad Dog and Snepvangers matching wit Soulcatcher. Neither played a creature on their third turn. "Nice," commented Davis when he saw Snepvangers play a third land type in that many turns. Chainflinger was up next on American's side of the table, spelling certain doom for the Soulcatcher. Snepvangers cast Aven Cloudchaser and traded it in combat for the Dog, leaving nothing but Chainflinger in play.

Snepvangers summoned a Psychatog, and Davis matched with Mystic Zealot, leaving enough mana untapped to activate his Chainflinger. Getting through for any damage on the ground may be difficult with Psychatog in the equation, so Snepvangers could concentrate on the offense – he tapped out to play Soul Scourge.

Davis tapped out for a monster of his own – casting a Crazed Firecat. Much coin flipping ensued, as the judge tried hard to let the coin fall on the actual tabletop. When smoke cleared, Firecat was 7/7, and Snepvangers was at least somewhat scared.

Snepvangers cast nothing next turn, with five mana untapped and five cards in hand – clearly representing Second Thoughts – but did he have it, or was he bluffing, hoping to convince Davis not to attack for a turn? Davis chose to attack with both of his creatures. Snepvangers did in fact have Second Thoughts. He used it on the Firecat but took two points of damage from the Zealot rather than risking his Psychatog. Davis summoned Militant Monk and Stern Judge and played another land, able to activate his Chainflinger.

Snepvangers played a Swamp. He now had two Swamps, two Islands, and two Plains in play! He cast Morbid Hunger on the Chainflinger and attacked. It was looking very grim for Davis, but he managed to top-deck Shelter. He attacked with two creatures, cycled Shelter on Militant Monk, forcing Snepvangers to remove two cards in his graveyard from the game in the bargain, and draw Aven Flock off the Shelter! All of a sudden, not only was Davis back in this game, but it was looking suddenly grim for the Dutch player.

Snepvangers took a five-minute turn deciding how and when to use his cards. He ended up casting Deep Analysis and then thinking some more. He attacked. Davis, at nine life, chose not to block. With no cards in hand, he could not bluff anything at all. Snepvangers discarded five cards to the Psychatog and removed his graveyard from the game to make it 10/11.

"I am awful," was all Davis could say before scooping up his cards.

Davis drew a one-land hand and was forced to take a mulligan. He had nothing to play before a turn 4 Petravark. In the mean time, Snepvangers summoned Aquamoeba and Skywind Aven, and was swinging with both while his Angelic Wall was holding down the fort. Davis drew nothing but land. He cast his only other spell in hand – a Reckless Charge, and attacked for five unblocked.

Snepvangers summoned Psychatog, but Davis slowed down the beating with Mystic Zealot. Snepvangers kept attacking in the air with Skywing Aven and a freshly summoned Aven Cloudchaser – while Davis drew yet another land. Davis was forced to chump-block the Psychatog next turn. He drew another land and conceded. Davis drew a total of three spells and ten lands that game.

"I am America's last hope," Davis commented about the fact that all other players in the top 4 were from Europe. "Poor them."

Snepvangers took a restroom break, so Jeff Donais took this opportunity to come over and give Davis a combination of a pep talk and a tongue lashing for his bad play in game 1. His back to the wall, Davis would now need to win three games straight in order to advance to the finals.

Mystic Visionary and Militant Monk gave Davis an early advantage, but Snepvangers' Hypochondria made the late game prospects less than spectacular. Snepvangers threw away a land to prevent the damage on turn 3 and then cast Deep Analysis to regain card economy. Davis summoned Hallowed Healer. He then enchanted Militant Monk with Crackling Club, bringing Snepvangers down to eleven life points.

Snepvangers played a fifth land but cast nothing, once again representing Second Thoughts. Davis was under no pressure to test him this time around. He summoned Chainflinger and passed the turn. He could also have attacked with his one toughness creatures and used Crackling Club on one of them in case Snepvangers did indeed have Second Thoughts, but decided to play conservatively. At the end of his turn, Snepvangers used Waste Away to kill Militant Monk – either he still had Second Thoughts in hand, or his bluff worked quite well. 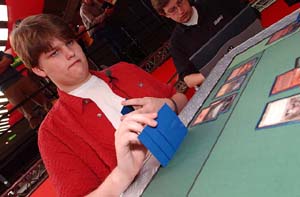 Morbid Hunger on the Hallowed Healer came next. Davis took advantage of his opponent being tapped out to cast Reckless Charge twice, bringing Snepvangers down to four life points.

Snepvangers sacrificed Hypochondria to prevent combat damage next turn. He did so because the only creature in his hand was Aven Cloudchaser, which he cast on the following turn. Davis removed it with Firebolt and attacked for the win.

Once again, Davis drew a one-land hand and took a mulligan. The new hand was very reasonable, allowing Davis to summon Mystic Zealot on turn 2 and Militant Monk on turn 3 – but Snepvangers took no early damage as he summoned Aquamoeba and then cast Think Tank.

Snepvangers spent a turn casting Deep Analysis, with one mana up. Davis attacked and Snepvangers did what he probably should have done two turns ago – blocked Militant Monk, discarded a card to make Aquamoeba 3/1, put damage on the stack, and flipped it back over to 1/3 again. He was now at eight life. Before ending the turn, Davis summoned a Mystic Zealot.

Snepvangers passed the turn back to Davis, so Davis cast Reckless Charge on the Zealot and attacked. Snepvangers tapped out for Second Thoughts, and Davis finally got to use his Shelter, saving it. Forced to chump block the Zealot with Aquamoeba, Snepvangers went down to five life points. Snepvangers did not draw any creatures that could deal damage – he played out a couple of Angelic Walls and was quickly losing cards to Hypochondria. He could not keep it up for long. Down to one life point, he sacrificed Hypochondria and cast Ghastly Demise to take out a Pardic Lancer, finally stabilizing the game.
Although Snepvangers had Think Tank in play, he was down at a very low life total. Firebolt or Volcanic Spray would likely finish the game. Davis cast Mystic Visionary and Mad Dog on the following turn. He could attack with all of his creatures and one would get through, assuming Snepvangers did not cast another blocker or have a trick. An opportunity would have passed a turn later because Mad Dog would be forced to attack anyway.

Snepvangers cast nothing, so Davis attacked with a pair of Visionaries, a Zealot (all flying) and the Mad Dog, holding back the Healer. Snepvangers pumped Psychatog, used Gallantry on one of the Walls and finally used Embolden. The end result of all this was Mad Dog heading to the graveyard and status quo being resumed. Snepvangers cast Psionic Gift on the Psychatog and killed off the Healer. He also used the Embolden out of the graveyard to stave off death for a turn. Davis cast a Savage Firecat and won a pair of coin flips, making it 6/6 – but Snepvangers was in control of the board far as creatures were concerned now. However, Davis drawing any burn spell could immediately end the game.

After several more exhausting turns, Davis finally drew Chainflinger, cast it, and put Snepvangers out of his misery.

Snepvangers made sure he would not be taking any combat damage early by playing out a pair of Angelic Walls. Davis cast Chainflinger; ready to chip slowly at the Dutch player's life total as he was building up his army of creatures. The game was promising to be a long one, as Psychatog and Hallowed Healer entered play on the opposite sides of the table and Davis cast Hypochondria to go along with it.

Snepvangers enchanted one of his Walls with Psionic Gift, taking out the Healer. The two Tims could now race against each other. This went on for many turns, with occasional extra creatures entering play to muddy up the waters even further. Finally, Snepvangers made his move, casting Ghastly Demise on the Chainflinger.

"There goes the game, boys" commented Davis, who did not have a Shelter in hand. Aven Flock was very helpful at holding off Snepvanger's flyers, but Psionic Gift was doing its job, one point at the time. Davis cast another "Tim" of sorts – Stern Judge. Snepvangers had one Swamp in play, so the Judge could match Psionic Gift damage for damage. Snepvangers had many more creatures in play at this point but Davis could buy time with Hypochondria, so the game remained as complicated as ever.

After a few more turns, Snepvangers cast Aven Cloudchaser. Both players realized that both of their annoying enchantments would be going away – Davis would sacrifice Hypochondria in response and force the Cloudchaser ability to destroy the only enchantment remaining in play – Psionic Gift. Snepvangers's numerous creatures were far more of a threat now that the super Healing Salve generator was out of the equation.
Snepvangers attacked with four flyers and a Psychatog, leaving back just a pair of Walls. Davis blocked a Cloudchaser with Aven Flock and threw several creatures in front of Psychatog. Snepvangers discarded several cards and removed almost his entire graveyard from the game to kill the blockers, and used Embolden to make sure he'd lose no creatures. Suddenly, the game was swinging heavily in his favor.

Two more attacks in the air, and Davis offered his hand in concession.