It’s the semi-finals of a Grand Prix, hands are shaking, foreheads are covered in sweat and there is a lot of money on the line, not to mention Pro-Tour Points and, above all, esteem. After battling through two tough quarter-finals matches, Bram Snepvangers, from the Netherlands, and Christoph Hölzl, from Germany, shake hands and prepare to play.

Bram is playing a WU weenie deck played at Worlds by team Punisher. Christoph is playing a Mono-Black Control deck that also did well at Worlds. I have to favor Christoph because although Bram has Battle Screech, Deep Analysis, Envelop and Quiet Speculation, the Black deck has all the answers in the form of Mutilate. 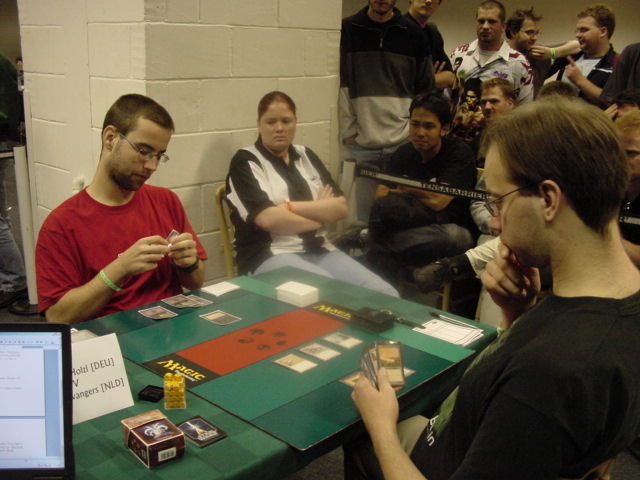 Bram went first, and kept his starting hand, as did Christoph. The first play was a Patrol Hound that survived Christoph’s turn to attack for two. Christoph Tainted Pacted through a Swamp, a sure symbol that he had enough mana, and took an Innocent Blood. Bram cast a Deep Analysis and ended his turn; Christoph cast Innocent Blood and the board was again free of creatures.

Bram made a Beloved Chaplain that was subsequently Chainer's Edicted. Bram Quiet Speculated for just a Deep Analysis and made a Shieldmage Advocate. Christoph seemed quite secure in this game as he Edicted the Advocate and cast a Diabolic Tutor off his recently played Cabal Coffers; the game is well under his control, Bram held a Divine Sacrament and an Envelop, and would have to really struggle to win.

Bram lost three life and went Deep, before he cast Divine Sacrament on an empty board. Christoph’s turn was slightly more crucial, with Bram tapped out the five-card Mind Sludge obliterated Bram’s hand. Bram discarded a Prismatic Strands and a Glory but his position looked dire.

A topdecked Advocate is met by a Nantuko Shade, and again the MBC pulled further into the lead. Christoph stared at the eight mana available to him and struggled to decide how best to play his turn. He flashed back an Edict and attacked with a pumped Shade to drop Bram to 11.

Bram cast the first half of a Battle Screech as he could not recast it. However, Christoph had all the answers and he boosted his Shade so that it coud survive his following Mutilate. Bram continued to draw creatures, forcing Christoph to find the answers. A Diabolic Tutor fetched another Edict and the Shade attack was fatal. 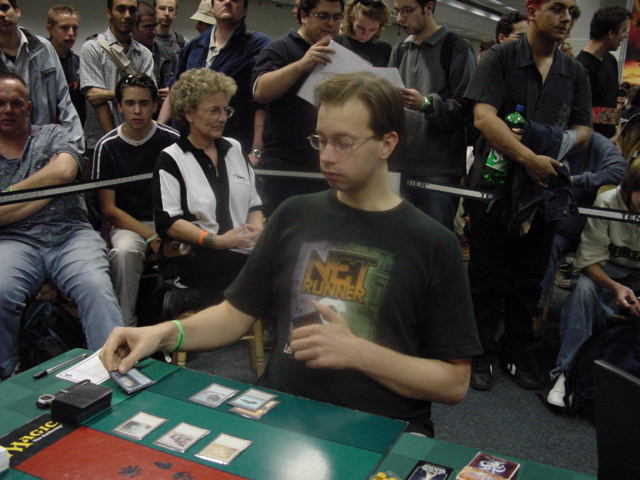 Bram kept his opening hand, which was very good (Island, Plains, Tireless Tribe, Patrol Hound, Beloved Chaplain, Deep Analysis, Envelop), Christoph also kept his. The Tribe is joined by a Hound and Chrstophe could only muster a Shade in defense. Bram attacked and made a Beloved Chaplain. Christoph could do nothing but Bram halted his attack as the Shade held all but the Chaplain at bay. A discarded then cast Deep Analysis gave Bram the land he needed to make a second Chaplain. This game looks under Bram’s control as he hand contained an Envelop, a Battle Screech and a Glory. Christoph cast a Tutor and was done.

All the two drops enter the Red Zone, the Chaplains went unblocked and a first-striking Hound took down the Shade; to make it worse, it was a Glory that had been discarded. Bram cast both halves of the Battle Screech and left the mana open to Envelop Christoph’s desperate Mutilate.

Every white body on the board hurtled to attack which dropped Christoph to a very low four. Quiet Speculation dumped three Deep Analysis into the bin, Bram greedily cast two of them and Christoph conceded the hopeless board position.

Christoph took out a Haunting Echoes and replaced the Mirari main deck; Bram mades no changes. 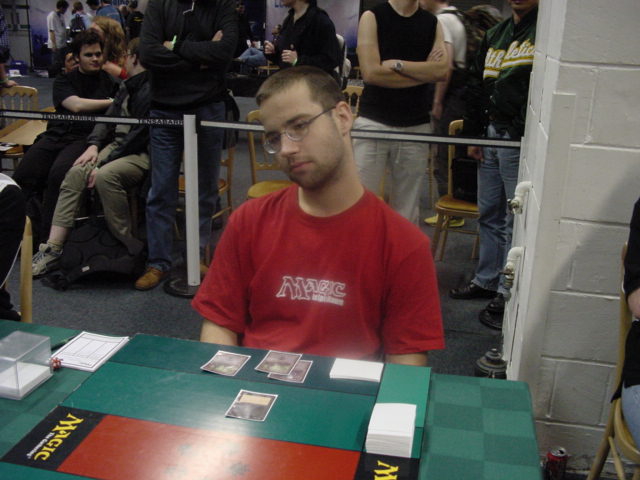 Christoph elected to play and has a very strong hand that included two Mutilates, his best card in this matchup. Bram mulliganed.

The first play was Bram’s Tireless Tribe that again managed to survive Christoph’s second turn to attack for the first point of damage, but Bram did nothing else other than lay another land and said done. Christoph cast a Shade which chose not to block the Tribe after Bram cast a Divine Sacrament and instead spent his forth turn attacking for 6 with his Shade which took Bram to 14. Bram cast another Sacrament and attacked for three, which left Christoph on 14 also.

Bram remainded stuck on three land, with the two Divine Sacraments mocking his creatureless board, because Christoph had cast a Slithery Stalker that ate his Tribe. Christoph added another Shade to the already one-sized table and then it was all over.