Share Article
Share Tweet Share
Pumba is a group of young Brazilian players who have surprised many with their outstanding performance here this weekend. Lead by Paulo Vitor, who is coming off a string of near-misses finishes at the last two Pro Tours, they have taken down some very big names on their way to a Sunday appearance. 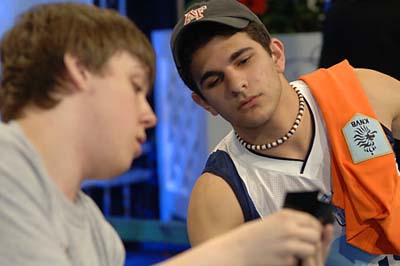 Chris and Gadiel consult, part of the freedom allowed in Team Constructed.

Sitting across from the Brazilian squad is perhaps the best young crop of American players in years. Gadiel Szleifer finds himself in his third Pro Tour Top 8 at the ripe old age of 17, and is flanked by longtime teammate John Pelcak on his left, and Chris "StarWarsKid" McDaniel on his right, a replacement for former :B team leader Tim Aten.

The team name for these kids comes from the fact that they got all their decklists from Pro Tour-Prague Top 8 member Rasmus Sibast. They were the last team to make it into the Top 4 competition, and the only team on 31 points to do so. The kids expected to do well here this weekend, but I think that their performance thus far has surprised even them.

Zampere Celso in the A seat is sporting a Von Dutch shirt, a tip of the hat to team Pro Tour winners past, or perhaps just the last clean shirt in his suitcase. McDaniel is most certainly wearing the last clean shirt in his suitcase - the flight he was supposed to catch home left at 6 a.m. Sunday, but he found himself with a more pressing engagement with an 11 a.m. start time.

McDaniel cast a turn-two Farseek, giving him access to all three of his colors on his second turn. Celso played a Simic Growth Chamber on his turn, and passed it back to Chris, who plopped a turn-three Loxodon Hierarch onto the table. Zampere laid a fourth land and Rolling Spoiled McDaniel's Temple Garden, but Chris had a Godless Shrine in hand to let him cast a second Hierarch on his turn, giving him a formidable elephant army.

Compulsive Research for Zampere let him dig deeper into his deck, but he apparently didn't find what he was looking for and cast another Research a turn later, finally laying a Watery Grave, and then discarding Breeding Pool before passing the turn. The Grave let Zampere cast Last Gasp on one of McDaniel's Hierarchs, dropping him to 1 without killing the elephant, but letting him stay alive for an extra draw step.

After the attack however, Zampere forced to admit that two Hierarchs and a Skeletal Vampire was going to be too much to handle. 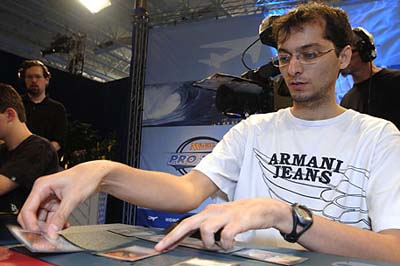 Willy Edel had more than a few tricks in his deck.

Going into the B seat match, Gadiel Szleifer was less than confidant in his ability to win. Yes, his deck packs many Savage Twisters, which should be good against Willy Edel's creature swarm, but tapping out against Edel is bad news. Not only does Edel have tons of burn than can end a game quickly, but he also has Bathe in Light, an effective counter to the Twisters. And the biggest x-factor is Sunforger, which is next to unstoppable by Szleifer should it resolve and start activating.

Things went well for the American in Game 1. Edel was tight on mana, and Szliefer was able to use cantrips - Remand and Electrolyze - to keep threats off the table. Szleifer played a Simic Sky Swallower when Edel had no creatures of his own, and it wasn't difficult to win from that position.

In the C set, John Pelcak was forced to mulligan to five on the play - a big blow to his deck's already poor matchup. Cak's early Boros Guildmage got some damage in, but Cak was forced to waste multiple cards to kill Paulo Vitor's Ghost Council and Belfry Spirit. John played a Skyknight Legionnaire and had to leave it on defense to block Paulo's multiple bat tokens. A double Plagued Rusalka plus Orzhov Pontiff from Paulo earned the concession. John could only look at his last card, a Giant Solifuge, and laugh.

Zampere was the victim of a drive-by mulligan to start Game 2, not exactly what he was hoping for in general, but particularly not while on the play. McDaniel's turn-two Farseek hit a Remand, while Zampere did something he failed to do at all in Game 1 - play a creature. Plaxcaster Frogling, the hottest amphibian on the block, hit the board for Celso and he followed that with a Vinelasher Kudzu a turn later, Remanding Woebringer Demon from McDaniel on Chris's turn, while his grafted beaters smashed McDaniel to 11.

Woebringer Demon again hit the stack for McDaniel, this time resolving just long enough for Putrefy it to send it to the graveyard. The subsequent attack dropped McDaniel to five, and he cast Congregation at Dawn during his upkeep to place a pair of Hierarchs and Skeletal Vampire on the top of his deck. Hierarch No. 1 resolved to push McDaniel's life back to nine, and Celso's torrid start was now ripe for a loitering ticket, as his failure to draw another land left his creatures unable to find a profitable attack.

Another Hierarch from McDaniel hit a Voidslime, but he was able to cast Rolling Spoil on Celso's only green source. An Overgrown Tomb off the top made Celso's Kudzu a 5/5, and the attack of the killer plants left McDaniel at 4. Skeletal Vampire provided a nice buffer between life and death, and the bleeding was again staunched as Celso cast a Plaxcaster Frogling before passing the turn. Nightmare Void from McDaniel was a particularly spicy meatsaball, letting Star Wars Kid make the Brazilian discard Simic Sky Swallower before he cast Crime to bring the giant flier over to his team.

But what happened next? We'll have to wait… 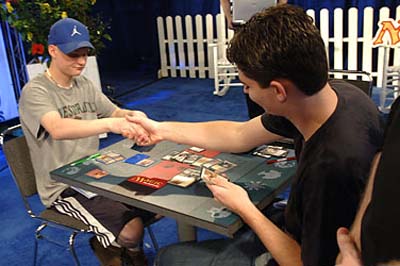 Vitor steamrolled Pelcak in a rough matchup for the American player.

In the C table, both players kept their initial seven. John started with a Boros Guildmage, Scorched Rusalka, double Seal of Fire, and a Bottled Cloister. The Cloister was a fine card in this matchup, as it both fed Cak extra burn spells and protected him from Castigate effects.

Paulo couldn't care less, once again playing Plagued Rusalka and Belfry Spirit. Paulo's Teysa, Orzhov Scion made Cak's attempts to stay alive particularly problematic. When Paulo played a Skeletal Vampire, John briefly looked at his two Seals of Fire, but decided to let the Vampire live, implying a strategy to burn his opponent out. That plan became more difficult with Paulo's next card, a Ghost Council of Orzhova. Cak fought on gamely, but when all his creatures were killed in a single turn, John fell to a hailstorm of bats, spirits, and legends.

Pelcak: "This matchup is sooooo bad. I was drawing two cards a turn and got crushed."

Game 2 was a different story for Gadiel and Willy. Edel got a Watchwolf and a Burning-Tree Shaman into play, and Szleifer was struggling to find all the colors of his mana. Sunforger resolved, and Edel attacked for 10. Szleifer was able to Twister the creatures off the board on his turn, but Edel had another creature to attach the Boros hammer to, and Szleifer had to scoop.

Game 3 came down to what may have been a crucial misplay for Szleifer. His Simic Sky Swallower was facing down a Watchwolf, Shaman, and Rumbling Slum from Edel. Szleifer had Savage Twister at the ready, but had divined that Edel was holding Bathe in Light, so he couldn't play the sweeper just yet. 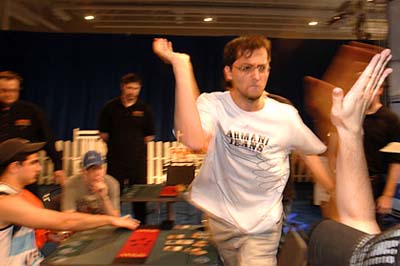 Edel put away Szleifer for the match win.

Edel played a seventh mana and went for the throat, casting Sunforger. Szleifer Voidslimed the equipment, allowing Edel to play Bathe in Light unhindered, and his army swept right past the SSS for the victory. Had Szleifer let the Sunforger resolve, he could have Voidslimed either the act of equipping or the casting of Bathe in Light, as Edel couldn't have done both. Then Szleifer could have Twistered for five, clearing Edel's board, and started attacking with the SSS.

As it stood, the Brazilian team Raaala Pumba defeated the American's Big Timing with Big Oots before McDaniel and Zampere had finished their second game. McDaniel pulled out the pyrrhic victory after the bright lights of the stage had come down, but Big Timing was going home.