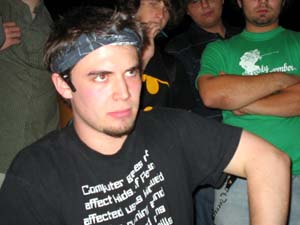 ! No one would have expected that this battle of Magic titans would come from a Grand Prix that started out with almost a thousand players, nor that it might be nearly matched in star power by the other semifinal between Pro Tour: Seattle and Dutch National champion Jeroen Remie and, and U.S. JSS champion and back-to-back Grand Prix top 8 competitor Jeff Garza.

Both players put out gassy starts with matching Arcbound Ravagers and Aether Vials on each side of the table. Unfortunately for Eugene, Kibler had both Cranial Plating and Disciple of the Vault, while Eugene only had a Frogmite on his side of the board. Harvey played a second Ravager on his turn, while Kibler used Aether Vial to put a Myr Retriever into play. Cranial Plating on a Retriever traded with one of Eugene's Ravagers, as Brian started to take over the game in spite of only having one land on the board. Ah, the wonders of Aether Vial.

Play slowed as Kibler relentlessly attacked with Plated Myr Retrievers, forcing Eugene to either block with his Ravagers or risk dying to Disciple life loss, but Kibler struggled to increase his advantage. Eventually the board got to a point where both players had a 6/6 Ravager, while Kibler also had a Retriever and a Disciple to Eugene's Blinkmoth Nexus. An end of turn Atog for Kibler, courtesy of Aether Vial assured Harvey would make no comebacks.

After a Harvey mulligan, game 2 was similar to game 1 in its start, except instead of Ravagers, this time the board was flooded with Arcbound Workers (three of them and a Frogmite for Kibler on turn 2 to Eugene's one plus a Frog). Harvey gave a massive boost to his army on turn 3 in the form of Myr Enforcer. A Viridian Shaman took out Kibler's fresh Ravager, and Eugenius followed that with two more Frogmites on the next turn, giving him a solid creature advantage.

Electrostatic Bolt from Kibler took out an attacking Enforcer, and the game again hit a stall, a relative rarity in the Affinity mirror. Since Kibler had a two-card advantage, this obviously favored the Dragon Master, giving him time to draw out of a minor case of mana screw and find a Disciple of the Vault. Kibler then began attacking with a Myr Retriever, plinking away at Eugene's life with a creature that is essentially unblockable unless Eugene wants to give Brian his Ravager back. Eugene allowed Brian to do exactly that on the next attack, signaling he had an Oxidize in hand. In fact, the quiet piano player had two in hand, crushing the Ravager and the target of its three counters on the next turn and severely diminishing Brian's board. 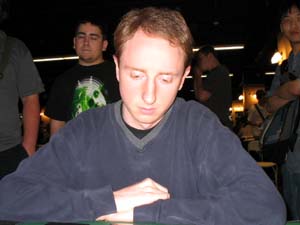 A 5/5 Arcbound Worker and a Myr Enforcer entered the red zone, as Brian looked to force Eugene into some bad blocks with a little help from Electrostatic Bolt. Eugene read the possible trick, but still lost three creatures to Kibler's one and dropped to nine life. Thoughtcast from Kibler found a Relic Barrier, and suddenly Eugene was in a very precarious situation. Kibler attacked with the Worker and a Frogmite this time, forcing Eugene to chump with the Worker with his own Frog

"Guess I shouldn't have sided out my Disciples there," joked Eugene