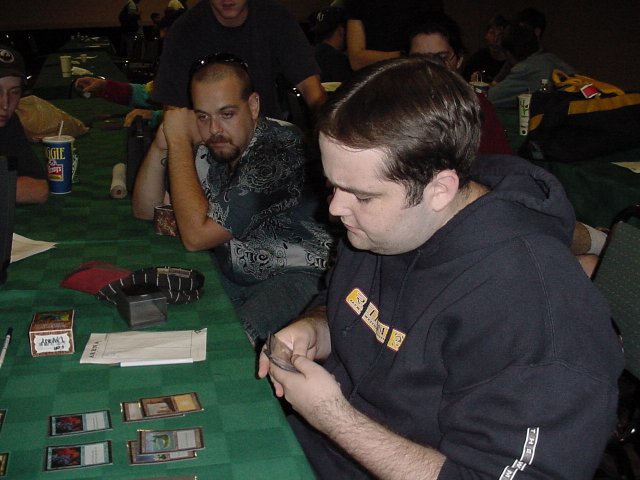 Mandel's counter-hippo deck is considered by many to be a nightmare matchup for Brock's Solution deck, with even the Sunscape Familiars being a very significant annoyance. Mandel's version bypasses Eladamri's Call and just uses four copies of his best available creatures: Questing Phelddagrif, Mystic Snake, Sunscape Familiar and Meddling Mage, with two Sabertooth Nishoba at the high end where Solution's high end is only Voice of All. Brock won the die roll and like everyone else chose to play first. But as Daniel said, of course "going first isn't important." Both players kept their opening hands.

Brock opened with Stormscape Apprentice then his second turn brought out a second Apprentice and a Plains. Daniel put out a Meddling Mage on Voice of All on his. Brock cast Repulse on the Meddling Mage and went in for two before the Mage promptly came back down with the same target. Brock took the opportunity to cast a main phase Fact or Fiction into four lands and a currently illegal to cast Voice of All. Daniel put the Caves of Koilos with the Voice of All, which Brock accepted.

The Meddling Mage came over for two on Daniel's turn, and he put out a second Meddling Mage. For this one he named Spectral Lynx. Brock asked how many cards Daniel had, and when Daniel answered five and discovered Brock to have six he cursed his smaller hand size. Brock then put out the third Meddling Mage, this one on Mystic Snake. Instead, out came the giant purple hippo, Questing Phelddagrif. Brock sighed and could only play a land. When Daniel attacked, Brock chose to tap only the hippo, letting both Meddling Mages attack if they wanted to. This of course brought on another inquiry as to Brock's hand size, after which the Mages were sent in. The one that was on Voice of All was blocked, and both Mages died leaving only Spectral Lynx out of bounds. The Stormscape Apprentice then drained Daniel for one with agreeable accompanying sound effects. 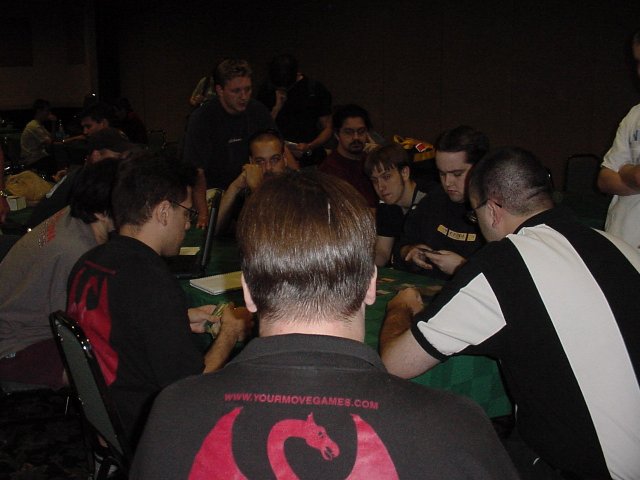 With Voice of All free to come out, Brock attempted to cast one but three Absorbs later Daniel gained a net of four life after the damage from his painlands and Brock had seven tapped lands but no Voice of All. With no mana available for the Apprentices they attacked for two, letting the Mage and Phelddagrif attack back for six. Then a second purple hippo joined the fray, letting Meddling Mage get through Brock's tappers. At this point, Daniel had both Absorb and Mystic Snake in his hand as backup as Brock dropped to eight, then six, then four without casting a spell. Daniel tried to add insult to injury with a Fact or Fiction but it didn't turn up anything and he ended up taking a lone Exclude. Still, it was more than enough. A Voice of All got Excluded, a Meddling Mage got Absorbed and that was game. Luckily for Brock, Daniel in his own words "had no idea what I'm doing." Still, Brock did not look happy.

Without knowing exactly what were the best cards to sideboard out but certain what cards he needed to bring in, Daniel decided to sideboard out three Questing Phelddagrifs, three Excludes and two Rushing Rivers for four Gainsay, two Rout and two Sunscape Master. Brock took out four Galina's Knights and two Absorbs for a more efficient four Gainsays, fourth Exclude and fourth Stormscape Apprentice.

The first creature of the game was a second turn Meddling Mage, which Brock used to try and slow down Daniel by naming Sunscape Familiar, but Daniel had a second turn Mage as well which he again named Voice of All with. They both died on Brock's turn in combat, and Brock had no follow-up play. Both players sat back playing lands for a time, until the end of Daniel's fourth turn when Brock tried to Fact or Fiction, which was countered by Mystic Snake. That let Brock get out a Voice of All with Protection from Blue, which Daniel's deck has no answer for beyond racing it or casting Rout, which he had in his hand. He responded with the creature in his deck best able to race for less than six mana, the lone remaining Questing Phelddagrif. That kept the Voice of All back for a while. Brock then put down an Apprentice to lock down the Phelddagrif, protecting it from Absorb with a Gainsay. Knowing Rout would likely soon be in order, Daniel attacked with his Mystic Snake and Questing Phelddagrif into the Voice of All, willing to trade the Snake for four damage. In fact, he decided to cast it right there. Although Daniel was tapped out, Brock had nothing to rebuild with. 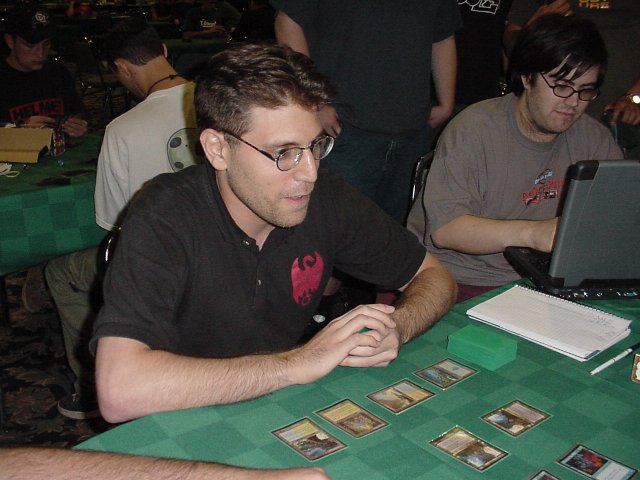 With no creatures left, Daniel resolved a Fact or Fiction, but it accomplished little as all he received was a Meddling Mage and a Yavimaya Coast and that Mage was countered by Exclude. With nothing else to do, Daniel raised his shields with a Sunscape Familiar and the next turn a second one. Having drawn a Sabertooth Nishoba, he cast it and all Brock had to say was "yep." A Stormscape Apprentice came out but Nishoba has protection from blue. A Spectral Lynx was next, but the Nishoba has trample. Brock tried cycling Repulse on a Familiar as he took another four points down to three. Brock had drawn a great deal of land, as the players noticed, and the Nishoba went over for the win.