He had successfully taken down Stuart Wright in the quarter finals, and now faced Paul Gower, a Cambridge player who is, up to this point, undefeated in Standard on the weekend.

The first play of the match was a 2/3 Kird Ape from Calum off a Stomping Ground, while Paul worked on getting his mana sorted, with 2 different Urza lands, an Izzet Signet.

Calum was all about the beats to begin, getting in with first just the Ape, then a Bloodthirsty Scab-Clan Mauler. Paul was shortly down to just 13, with his first attempts to slow down Stephenson being a Repeal on his Ape, after Isamaru came along.

The following attack step, Isamaru got hit by Electrolyze, and the Kird Ape got hit by Mana Leak on the way back in. It was just as well for Calum that he still had a Mauler doing what it does best to Paul, and a Char with which to take Paul from 10 to 6, given his tapped out status.

Paul wasn't quite on the ropes, but he was definitely edging towards them. He used a Compulsive Research to restock a little, and passed.

Calum simply attacked and passed. Paul was on just 3. 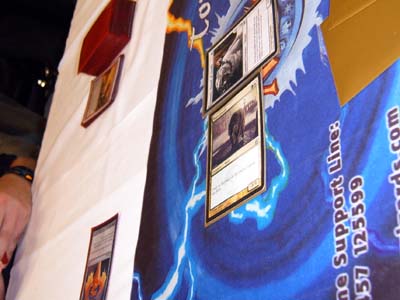 'This feels good…' smiled Calum, enjoying himself just a little too much.

The punishment for such comments was a Keiga the Tide Star from Gower, which stood front and centre, ready to block as necessary. The Flames of the Blood Hand from Calum was hit by Mana Leak, and all that Stephenson could do was to play an Isamaru and pass.

The legendary hound got hit by Electrolyze from Paul, who looked to be getting back into the game.

Calum didn't have to do much though to take the first game, and his chosen method was Lava Spike.

'To anyone that disses Lava Spike, I say, take 3' quipped a cheery Calum, as he looked to his board for Game 2. Soon he would be able to trade in his 'Top 8 County Champs' playmat for a Worlds Playmat, and the prospect clearly had him feeling pretty good.

The first play of Game 2 was another of those magical 2/3 Apes from Calum on turn one. Getting in early beats is pretty important for Zoo against control decks like Tron, and Calum did just that; running in before trying an Isamaru, which got hit by Remand, and a Lava Spike, which did not.

The ape got hit by Repeal the following turn, to which Calum simply replayed him, along with a Watchwolf. These two merrily swung in to take Paul to 10, and Isamaru came out without incident.

Paul was forced to play a defensive Wildfire, but Calum had the Bathe in Light in order to keep around all his monsters but the Ape. Suffice to say, it really didn't take very long for Stephenson to finish things off when all his opponent had was an Izzet Signet.

Calum wins game 2, to take a 2-0 lead, needing just one more to advance to the finals.

For the third game running, Kird Ape was a 2/3 on turn one. I checked with Calum whether or not it is, as the crowd surmised, nice. Turns out it is. 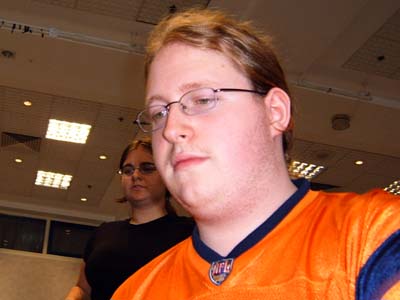 The following turn a second Ape showed up, along with a Lava Spike to the face. Paul used a Volcanic Hammer to take down one Ape, but Paul was still in a lot of trouble, getting hit by a Flames of the Blood hand to take him down to 9. A Simic Signet came out for Paul, which looked to be in trouble as a Tin-Street Hooligan came along.

Spell Snare stopped that plan though, and Paul got to keep his Signet, and then Repeal and Mana Leak the Ape. Paul tried to fight back in the burn race, but when his Electrolyze was responded to by a Flames of the Blood Hand, to take Paul to 3, it looked to be a race that would be tough to win.

Calum tried an end of turn Char to kill Paul, to which Bower responded with…

A Repeal on his own Signet.

It was going to have to be a windmill slam of a counter to get out of this situation.

It turns out that Izzet Boilerworks does not counter spells.
Calum Stephenson wins 3-0!