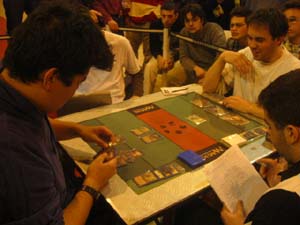 A difference of side but not of skill.Antoine played first and Carlos had to take a mulligan.

Antoine: "All my opponents are mana screwed or mulliganing today"
Carlos: "Caltos!"

The World Champion attacked with the morph and the Taunting Elf, which both Ruel's 2/3 and 3/3 had to block. He morphed Patron of the Wild, making his 0/1 a 6/7 with Timberwatch Elf.

Antoine hasn't had his last word, and a few turns later after losing all his creatures in an attack he managed to make a face-down Cabal Exetutionar go through. At that point, the Cleric was only facing Taunting Elf and Timberwatch Elf, since Carlos had had to sacrifice another freshly-played Timberwatch Elf. But the waves were just too fast. Spitting Gourna and Seedborn Muse finished what the elves had started.

Antoine Ruel, Frenchier than ever, tried to draw on his first turn when he was supposed to be playing first.

After they traded a couple of attacks and creatures, Antoine decided to play Infest to kill his own Buzzard, Timberwatch Elf, and Shepherd of Rot. Carlos chose to discard his spoiler Mystic Proportions and keep his cheapest creatures, which he then proceeded to play one by one, turn after turn: Seedborn Muse, Sootfeather Flock, and Everglove Courier. Antoine tried to race the 3/2 with Severed Legion but the great amount of Swamps he was drawing didn't help him a lot. Things really start to go wrong for Ruel when Carlos had the good idea to play Krosan Tusker. The Beast, too big for Antoine's 2/2's, forced him to topdeck.

He looked at the top card of his library, added it to the pile of lands he had already played and conceded with a smile. Being Top 4 is already good, and he knows that three members of the online clan Cephalid Sea Fodd Restaurant are on the podium and that is a little victory.