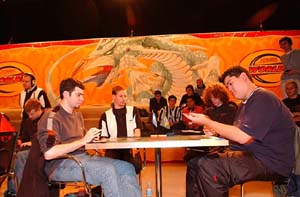 Carlos Romao of Brazil and Argentinean National Champion Diego Ostrovich became the first Latin American Players to make Top 8 of a Pro Tour. They did so with equal parts teamwork and resolve. They collaborated with the rest of what has become the Latin Alliance, a group of pros from Venezuala, Chile, Argentina, Brazil and Uruguay. They tested endlessly for the three formats, and now their reward is that one must knock out the other on the way to the finals.

Ostrovich and the rest of the Argentinean team came within a match win of the team finals, but were eliminated by Denmark. Ostrovich carries that drive into this match.

Ostrovich had to take a mulligan to start. Romao matched him, ostensibly for fairness's sake. It was a stop-and-start opening. Romao kicked off, and walked a Familiar into Ostrovich's Chainer's Edict. He had no follow up. Ostrovich made a Familiar of his own. Romao Repulsed it.

Ostrovich upped the ante with a Psychatog. Romao went for another Familiar. Ostrovich Edicted. Romao Repulsed to rescue. It was countered. Romao untapped and Edicted back. Cunning Wish fetched his Fact or Fiction.

With that mayhem over with, the two drew and passed for many turns. A Cunning Wish from Ostrovich got him a Fact as well. Romao hit eight cards and discarded Repulse. He played Fact or Fiction at the end of Ostrovich's next turn, getting Underground River and Counterspell over three islands.

Ostrovich returned the favour. Romao tried to Logic it, with six mana remaining. Ostrovich played a Logic of his own with just five cards in the graveyard. Romao let the stack resolve completlely. Ostrovich got two islands and a Psychatog over Nightscape Familiar and Repulse.

HE untapped and went for the 'Tog. Romao Counterspelled, and it held up. Ostrovich passed it back. Romao busted out Deep Analysis before turning it back to Ostrovich. They played a little draw-go. Ostrovich went for Fact or Fiction. Romao did not contest it. The split offered was Circular Logic, island and Repulse versus Deep Analysis and Nightscape Familiar. Ostrovich took the larger pile.

Now Ostrovich went for another 'Tog. Romao Counterspelled. Ostrovich countered back. Romao took the opportunity to resolve a Fact or Fiction. It was gold. Deep Analysis, Cunning Wish, Memory Lapse, Psychatog and Fact or Fiction. He got to take Psychatog, Analysis and Wish. The third Counterspell from hand tried to bust up the stack. Ostrovich played Circular Logic with just three mana remaining. Romao played his final Counterspell. Two Force Spikes later the 'Tog resolved, and Ostrovich had two mana remaining.

Ostrovich started Game 2 with Duress for Memory Lapse over Circular Logic and Upheaval. Romao built his mana base, and suffered another Duress two turns later. It stole the Logic and left behind Cunning Wish and Upheaval. 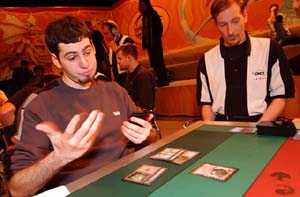 Ostrovich kept his control up with Fact or Fiction. He got a Familiar and two islands over Cunning Wish and Circular Logic. The Familiar hit play, and Romao fetched Repulse with the Wish. He untapped and pulled Duress. It earned a Counterspell. He made no further play. He Repulsed the Familiar at the end of turn. Ostrovich played Fact or Fiction in response.

He got two Counterspells over Edict, Logic and Underground river. Repulse resolved. Romao found another Duress and a Nightscape Familiar. Duress was Counterspelled. The Familiar fell to an Edict. Ostrovich's got to stay. Then he Probed with kicker, removing Romao's hand of two cards. He also played Psychatog with two mana open.

Ostrovich made no alteration to his board for Game 2, neither did Romao. Romao chose to draw, mulliganed, and was stuck with a two-lander. Ostrovich had no problem throwing down four and targetting himself with Deep Analysis. Romao managed to rip two to keep up the pace, but they were Salt Marshes, so he was a bit behind.

Ostrovich Analyzed again, and played his Psychatog. Romao wished for Repulse at the end of his turn. Then he went fishing with Deep Analysis, scoring Duress and the Underground River to cast it. He saw a hand of all gas. Two Psychatogs, Cunning Wish, Repulse, Deep Analysis, Probe and Counterspell. He took the Probe to protect his hand.

Romao got some Analysis on. Ostrovich Repulsed at end of turn, and Romao returned the favor by bouncing the Psychatog. Ostrovich replayed it, getting it past Counterspell with one of his own, then used the Analysis in his graveyard.

Romao found the third Duress waiting for him, and saw Upheaval, Probe, Cunning Wish and Repulse alongside a swamp. He took Repulse. Down came his Nightscape Familiar. He passed it back. Ostrovich's Probe with kicker resolved, catching Fact or Fiction and Upheaval. He attacked. Romao had to block and regenerate against the 'Tog. Duress stole his remaining Upheaval. Another Familiar was insurance for Ostrovich.

Romao Edicted and handed it back. Ostrovich hit for one again and made another Familiar. Romao pulled up Fact or Fiction and passed. Ostrovich Wished up Opportunity and cast it at end of turn. Circular Logic stopped it.

Ostrovich, low on cards, knew it was time to act. He tapped eight and played Upheaval with four floating. Romao Memory Lapsed. The extra man set up shields on the Familiars. This left Ostrovich tapped out and gave Romao free reign to play Fact or Fiction. He got three land and an Edict over another Fact or Fiction. Ostrovich attacked again. Romao chumped. Ostrovich tried the Upheaval trick again. Romao Coliseumed into Counterspell.

He was at four. Another attack left him at two. He Wished for Repulse to stop the Psychatog. Edict took out the Familiar, but he had no permanent answer for the Psychatog.

Ostrovich was stuck at two land early in Game 4. He made a pair of Nightscape Familiars and started hitting while Romao made islands. His shortness on black mana meant his Duressess sat useless in his hand. Ostrovich pulled a third land and made a Psychatog. Cunning Wish got Romao a Repulse. His Salt Marsh was a little too slow. He Repulsed the Psychatog. Ostrovich let it slide and wished for Mana Short. The Psychatog came back down.

Finally, Romao got to use one of his Duresses. He saw Duress, Edict, Upheaval and Repulse, stealing the Mana Short. Ostrovich's minions brought him to twelve. Ostrovich Duressed right back and saw an an all-action hand of Upheaval, Fact or Fiction, Circular Logic, Cunning Wish, Deep Analysis, Nightscape Familiar and Duress. He stole the Wish and burned for one as a result of his Catacombs.

Romao Duressed again, this time seeing island, Chainer's Edict, Upheaval and Repulse. He took the Repulse and triple counted it to make sure he wouldn't fall to an attack. He took another point, falling to eleven, to make Nightscape Familiar. He took three more in an attack and stopped a second Psychatog with Circular Logic.

He untapped. He stared at his hand and tried Fact or Fiction. It turned over Chainer's Edict, Repulse, Counterspell and two land. Romao got the two land and Repulse. He ended his turn. Ostrovich swung. Romao blocked as insurance and then played Repulse on the Psychatog.

The third Duress stole Upheaval and left Ostrovich with just Psychatog and land in hand. Another attack brought Carlos to four. Psychatog met Circular Logic. Romao untapped and made a Nightscape Familiar and Deep Analysis. OStrovich attacked and brought him two three life and one available mana. He ended his turn. 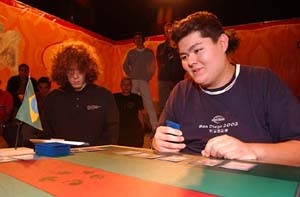 Romao played Fact or Fiction. It scored him Coliseum and Familiar over two Analyses and an Endict. He untapped, played both, and swung with his active Familiar. Ostrovich fired back to put him at 1. Romao let it through. Chainer's Edict forced his Coliseum, but it just gave him what he needed. He played Upheaval, then Familiar and Psychatog to take the game.

Romao's Fact or Fiction went back to the board for the final game, in place of a Repulse. Romao mulliganed. He led with island. Ostrovich revealed his secrets with a Duress. He saw Cunning Wish, Chainer's Edict, Nightscape FamiliarFact or Fiction and Underground River. It wasn't a bad Mulligan for Romao.

Ostrovich stripped the Fact or Ficiton. Romao made the Familiar. Another Duress left Romao with a newly-drawn Familiar and Chainer's Edict. He ripped a land and dropped his second Familiar.

Ostrovich passed his third turn without playing a land. When he also missed on his fourth, Romao's spirits began to rise. Finally, he pulled a Salt Marsh and dropped Nightscape Familiar. Romao hit for two and Edicted him, safe with Counterspell in hand. He used it to stop Psychatog on the following turn. Then he dropped one of his own.

Ostrovich, now with five land, had nothing to say to that. Romao's next attack brought him to five, the cumulative pain of his Rivers adding up. Romao then played Deep Analysis twice. He let his Psychatog be Repulsed. Ostrovich made no play.

Romao dropped him to three and played his 'Tog. It resolved. Another Repulse bought Ostrovich more time. Cunning Wish fetched Mana Short. Ostrovich had seven mana at his disposal on his turn. Three of them were for Psychatog. He passed it back. Romao's Cunning Wish got Fact or Fiction. He played it.

Ostrovich split them island and Logic versus Psychatog, Fact or Fiction and Edict. Romao took the Logic and island. Ostrovich tried his Mana Short. Romao played Logic. Then he made Upheaval, floating one. He played a Familiar and handed it back.

Ostrovich made Salt Marsh, thinking for a minute that he'd find an answer. Down came the 'Tog. Ostrovich extended the hand.