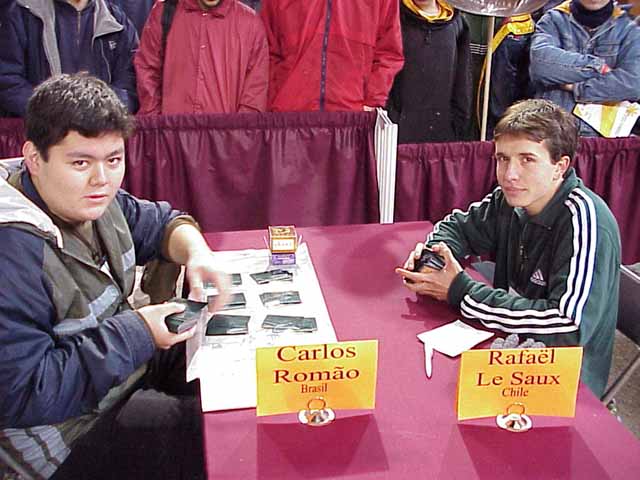 Rafaël won the die roll and chose to play first. Looking at his opening hand, he saw Island, Grim Monolith, and five blue cards. He mulliganed into a hand of Island, Grim Monolith, and four blue cards. Quite an improvement. His third hand contained a Rishadan Port and four blue cards, and he decided to try and topdeck some blue mana rather than mulligan again. Against a land destruction deck, he knew that the game was almost hopeless, but he would try to win anyway.

After pulling five islands off the top of his deck in five turns, however, a smile began to creep back into Rafaël's face. His first Morphling got hit with a Hammer of Bogardan, but the second one made it through. His life total was falling low due to Carlos's burn, and Rafaël didn't have quite enough mana to protect his Morphling from Seal of Fire, double-Cave-In, and the Ghitu Encampment that threatened to kill him. The 0/6 Morphling died as chump-blocker, but Rafaël pulled out a Masticore to finish the job. Carlos's game-winning Hammer was countered by Miscalculate-double-Daze, and Rafaël's used his Masticore to score a first-game victory.

Rafaël felt a bit of déjà vu in the second game as he opened up yet another one Island, one Monolith, five blue-card hand. With admirable consistency, he mulliganed it away and kept the six-card card that contained only a Rishadan Port for mana.

And once again, his deck helped him out, giving him four islands over the next five turns. Rafaël used Chill to lock down the land-hosed Carlos, and five combat phases with the powerful Masticore granted him a quick victory.

The third game was even more pathetic for the poor Ponza player, who was unable to handle Rafaël's three Chills. A Stroke of Genius for eleven cards assured Rafaël Le Saux of a perfect 3-0 victory.