Semifinals: A Case of the Bens

-and-comer Ben Lundquist used his 'Tron to defeat Alex Sittner in the quarterfinals, while Zoz used Persecute to annihilate Tim Aten's hand and move one step closer to the title of 2006 National Champion.

With 15 Pro Tour points and counting, Lundquist has staked his claim as a contender for the Rookie of the Year title. But in order to represent Team USA, he'll have to get through Ben Zoz, who's been there, done that, and would like nothing more than be there, do that once again. 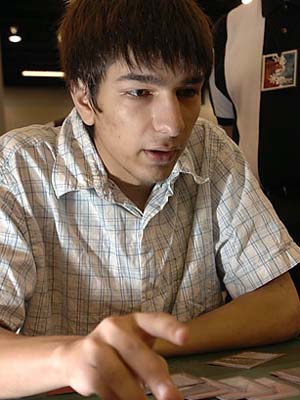 Each player kept their initial seven and spent the first two turns developing their mana.
Zoz moved first with Compulsive Research and let Angel of Despair and Mortify hit the bin as if that's where he wanted them in the first place. Lundquist answered with a signet, with two 'Tron pieces already in play.

Zoz took two for Watery Grave and went for the early kill with Zombify. Lundquist nodded, and the angel blew up an Urza piece. Another took its place, and a second Signet came down. The angel swung and the follow-up Persecute to seal the deal met Mana Leak.

With a completed 'Tron, Demonfire for 9 went directly to Zoz's melon, and with three pain land pings, it put him at the precarious life total of 8. Zoz sent the angel and passed the turn, appearing leery of the explosive potential of this particular Red Deck Wins.

Lundquist drew his card, tapped all his lands except an Island, and calmly aimed another Demonfire to the grill. Zoz had the Remand, but Lundquist's single blue was enough to Spell Snare for the win. Two shotgun blasts to the face wowed the crowd and left Zoz grinning as he reached for his sideboard.

Lundquist tried the early aggression with an Annex on Caves of Koilos. Zoz fought back with Remand, but Mana Leak reinforced the move. With two 'Tron pieces, a pair of Signets, and two more lands to boot, Lundquist sought a mana sink/win condition.

His Compulsive Research met Remand, and Zoz took a mighty long time on his next turn. Persecute ran into Mana Leak, and he dropped another Signet.

Research resolved for Lundquist - Demonfire and Annex hit the 'yard. The missing 'Tron piece was still A.W.O.L. Zoz did nothing on his turn, indicating some countermeasures, but allowed another Compulsive Research to resolve. At end of turn, Zoz got his Caves back with Mortify and dug a little deeper with his own Research. Nothing of consequence binned, and back to Lundquist it went.

His turn yielded nothing new, and both players appeared wary of opposing countermagic. Zoz dropped his fourth Signet, and after a quick draw-go from Lundquist, he was again contemplating action. He took his time, did nothing, and sent it over. 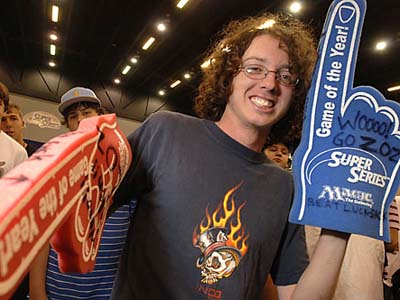 The Official Ben Zoz Fan Club cheers on their - okay, his - hero.

Lundquist's Meloku met Remand, and Zoz waited and waited and finally had to giggle when Lundquist returned it to his hand without a fight. With only five lands in play, Lundquist had to choose his battles, and the victory in this case would apparently have been textbook pyrrhic.

Zoz hardcast Angel of Despair, which was worth a fight - Remand fit the bill. Lundquist finally found his 'Tron, and Meloku made resolution attempt number two. Zoz allowed it to hit, but only until end of turn, when he pointed Mortify at the legend. Mana Leak saved it, though left Lundquist with only two sources of blue and a singleton Urza piece untapped.

Again, Zoz dropped the Angel, Remand fought authority, and Zoz pointed another Mortify at Meloku. Two tokens came into play, and now it was Zoz who was nearly tapped out, with only a Shrine available.

Keiga joined the tokens, and once again Zoz 's Angel ran into Remand. Persecute slapped itself onto the table.

Confiscate, Confiscate and Annex hit the bin, and left Lundquist with only two lands in hand.

Nevertheless, Keiga and friends were still in play and threatening to end Zoz's game if he didn't strike while the fire was hot. For the fourth time the angel came down, finally resolved and put the Tower out of its misery. 'Tronless, and with only two cards in hand, Lundquist took a cursory look through his graveyard before he shipped it over.

Zoz sent the Angel into the zone, which Lundquist took, but not without a little apprehension. He cast a post-combat Yosei, and with seven mana at his disposal, he turned it over. Keiga returned the favor and got Zoz to 4. With two tokens available to block Zoz's flyers, Lundquist appeared in the driver's seat.

"Zoz stares at the board, Lundquist stares at Zoz."
- Randy Buehler

Lundquist's cold, analytical gaze remained focused on Zoz, who nearly burned a hole in the board. He gave Yosei fear with Shizo, and Kai Budde stepped in front of the angel. After getting Lundquist down to seven, he turned it over.

When Keiga sent, Minamo untapped Yosei and blocked. Lundquist ended up with the angel and Zoz tapped down two Vents, a Reef, a Signet, and a Meloku token.

Zoz hardcast Angel of Despair and took out its sista, but Lundquist dropped another Keiga and achieved a slight advantage. Zoz cast Court Hussar and took one full minute to examine his options before ending the turn.

Lundquist passed it back, and the game slowed to a crawl, even in comparison to the pace so far. Zoz sent the angel into the Red Zone, and the last token took one for the team. Kokusho joined the fray, traded with Keiga, and gave Lundquist the Angel - but dropped him to 2 in the process. 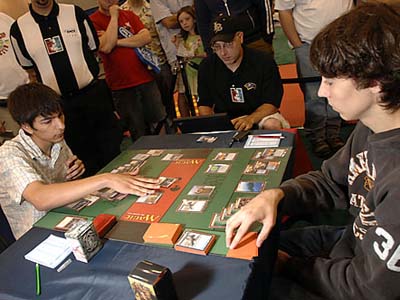 Battle of the Bens

Zoz, at 9, added Court Hussar and got a comment from the judge to get a move on. An attack put Lundquist to one, and again the judge had to step in when Zoz spent a little too much time in his opponent's graveyard.

Cranial Extraction: Hinder revealed a hand of two lands, and Zoz chose to whiff when he went though Lundquist's deck. The path clear, he dropped another Angel and waxed her traitorous counterpart. When an answer was not on the top of Lundquist's deck, he scooped.

Nearly an hour after this match started, the judges encouraged Zoz to speed up his play in the next game.

Zoz and Lundquist traded four Compulsive Researches for the first half-dozen turns, and filled their grips with large amounts of ammunition, which they would need in reserve to win this potential marathon.

Now, with Lundquist empty handed, Zoz searched at will for answers with Compulsive Research and a second Hussar. Yosei was the ticket, though Lundquist had peeled the Remand. Zoz tapped out and Remanded his own Yosei to prevent Lundquist from digging deep. 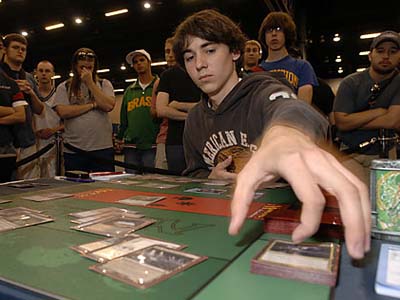 Lundquist untapped, and a smile nearly crept from his stoic lips as he dropped a freshly-peeled Demonfire onto the table, proving once again that Lurking Informant is the new technology. Pretty much.

Zoz missed his fourth land drop, and Lundquist made him pay with Annex on his lone Island. Lundquist cast Tidings and had to discard, just like Zoz did the turn prior.

Zoz found his third land, Lundquist Confiscated it, and when Zoz floated mana to try to Mortify the Annex, Lundquist had the Mana Leak.

Confiscate stole the Swamp next turn, and left Zoz with just Plains and Boseiju. With a 10-2 mana advantage, Lundquist Annexed Boseiju just in case.

Zoz scooped up his one land, and Ben Lundquist is on his way to Paris as a member of the U.S. National Team. Zoz will face Luis-Scott Vargas's vicious Reanimator to determine the final member and alternate to the team.