Semifinals: Championing a Cause

aving overcome the self-described indomitable luck of Andrea Mengucci in his Quarterfinal match, Nam Sung Wook already defeated a Red-Green Elspeth deck today. Junk Constellation, with its ability to draw cards, remove threat, and use Elspeth, Sun's Champion defensively were a powerful duo that proved the difference for Nam throughout the weekend: It's exactly how he had dispatched Mengucci in the Quarterfinals.

Yuuki Ichikawa, in addition to his choice to deck, was in a similar position as Mengucci. Earning his way to the Pro Tour from a PTQ and finding himself in his first Pro Tour Top 8, the up-and-coming Japanese player Japanese player deviated from their similarities in one crucial way: He defeated No. 2 Ranked Player Reid Duke in his Semifinal match. Red-Green Elspeth may have been a popular, known quantity but that didn't make it less effective. 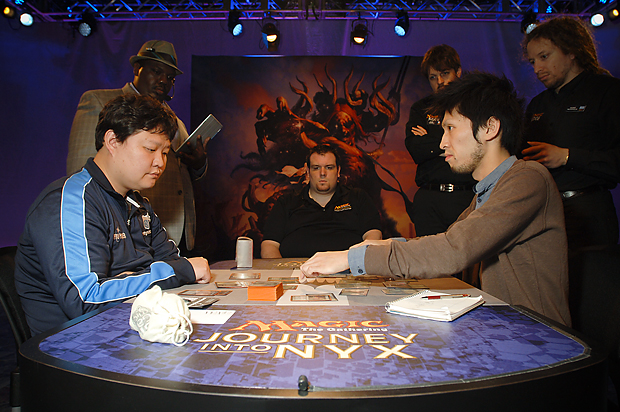 Yuuki Ichikawa's Red-Green Elspeth deck has been a force all weekend. Nam Sung Wook dispatched one in the Quarterfinals, however. Could he do it again?

Could the monsters of Ichikawa find a way to overcome the odds again?

Like every game seen on the weekend, scry helped shape the hands and mana for both players, though on opening Brain Maggot from Nam tied up Courser of Kruphix from Ichikawa's hand.

It was all mana acceleration for Ichikawa, who played Polis Crusher to try and start his attacks. It met a Hero's Downfall next turn. Brain Maggot plucked Stormbreath Dragon from the Japanese player's hand, but Ichikawa reclaimed his Dragon to attack again, this time successfully.

Chained to the Rocks, Banishing Light, Courser of Kruphix and Brain Maggot made tracking permanents and cards in hand a challenging exercise for both players. Both had often had access to perfect information. 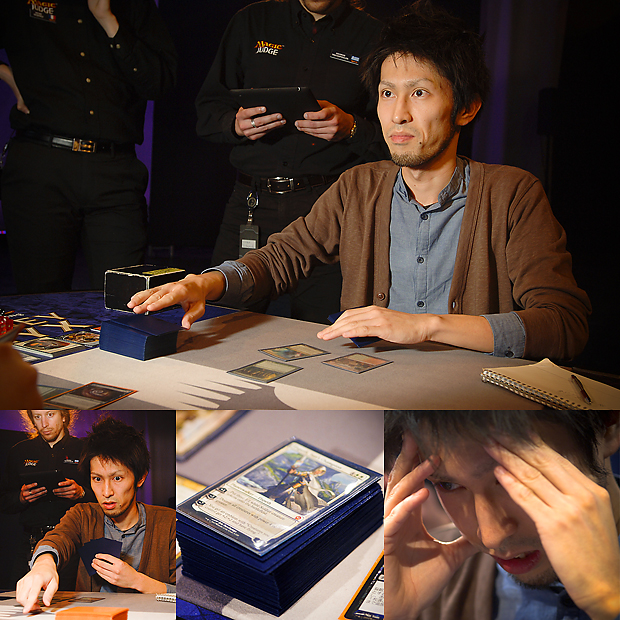 Ichikawa clashes with his opponent in a match that features a flurry of removal, big threats, and plenty of Elspeth.

Banishing Light unchained the Brain Maggot before Nam used Silence the Believers to exile the Dragon, though Ichikawa had another Chained to the Rocks to take back a Courser of Kruphix from the first Brain Maggot. Banishing Light handled Nam's Eidolon of Blossoms before Ichikawa cast Elspeth, Sun's Champion to begin assembling an army, knowing Hero's Downfall lay in wait next turn.

Ichikawa's Ajani, Mentor of Heroes, with a second copy of Elspeth on top of the library in waiting, drew a twist of disappointment from Nam. However, drawing Herald of Torment a turn later let him handle both Ajani and Elspeth in short order before he cast his own Sun's Champion.

Soldier tokens traded on both sides before beginning to flood out for the South Korean. With a third Hero's Downfall, Nam kept Ichikawa's final threat – Polis Crusher – out of the way and claimed the first game with his demon-led army of tokens.

The second game developed similarly. Nam's second-turn Brain Maggots revealed and pulled Purphoros, God of the Forge from Ichikawa's hand. The powerful God had come out from the sideboard to aid the monsters, which could come thanks to the Sylvan Caryatid and Courser of Kruphix Ichikawa was able to play. 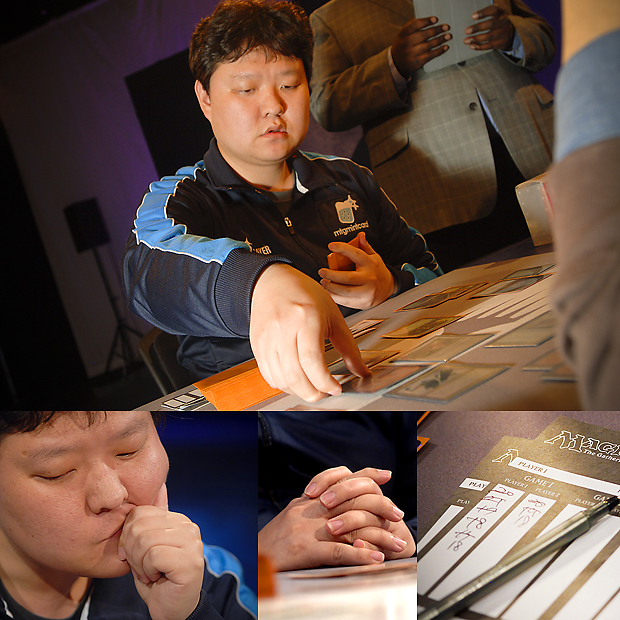 Nam's deck is particularly punishing on a mana-starved opponent.

That was assuming, of course, Ichikawa could find enough lands. He had just three in play with only Sylvan Caryatid as a white source and Elspeth, Sun's Champion on top of his library. Eidolon of Blossoms wasn't long for the battlefield after Nam cast it, but the Elspeth that followed was.

Without that second white mana, Ichikawa's options were limited and a turn too slow: Fleecemane Lion with monstrosity turned Nam's force into a formidable wall. With Nam content to set up an Elspeth ultimate it was on Ichikawa to find a way through to the planeswalker.

Hero's Downfall stopped the attacking Polis Crusher, and the ultimate that followed was more than Ichikawa could take. The last of the monsters of the Top 8 had finally been crushed. 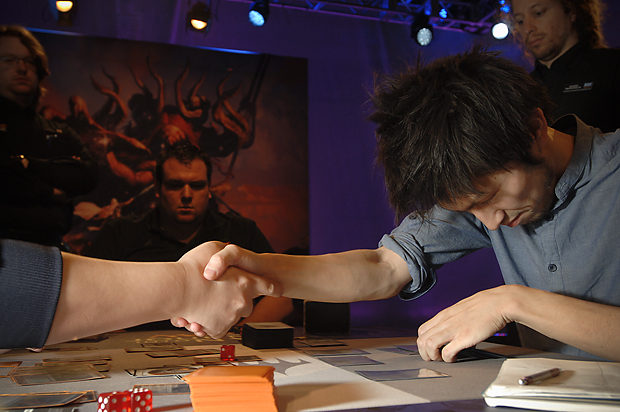 With no way to stave off Nam's forces, Ichikawa offered the handshake.