In yet another control on control matchup, Chang was U/W and Yujian U/W/B. 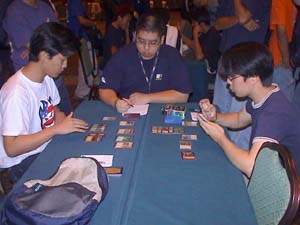 Yujian played out Mystic Visionary, Frightcrawler and Aven Flock. Chua Chang made a Mystic Familiar, Skywing Aven, Mystic Zealot and Hydromorph Gull. It was pretty obvious at this point who had the better deck. In no time at all Yujian was at 13 and Chang at 16. Eventually Zhou got rid of the Gull with Waste Away. Chang then made Pilgrim of Justice, and Aven Archer! Blocking was very difficult for Zhou and what damage he managed to inflict on Chang was negated when Chua plaeyd Teroh's Faithful to ensure he was always ahead of the race.

Desperate to stop the offense, Yujian attempted to rid himself of Chua's Zealot by double-blocking with Mystic Visionary and Aven Flock. Chang surprised Yujian by willingly sacrificing his Pilgrim, and pitching a card to return Skywing Aven to his hand - putting him behind in tempo and attack options but importantly getting to Threshold, saving the Zealot and mangling the Aven Flock. This was a brilliantly calculated move and as it turned out, the rest of the game was dominated by the Zealot. Once Yujian's life total was low enough, Chua holding Auramancer, enchanted his Teroh's Faithful with Psionic Gift to deal the final points of damage to Zhou.

Believe it or not, this game was all about Frightcrawler. Chang started out with Testament of Fate which did not turn out to be very useful. Yujian had Cabal Torturer, which is excellent in this matchup. The next few turns were uneventful, until Chang made the cool combo of Auramancer + Ghostly Wings. The Auramancer got sent back by Churning Eddy, and when Chang tried to re-establish the combo Zhou had Syncopate. Chang got to play a Syncopate of his own when Zhou tried to cast the game prolonging Aven Flock. Of note was how Chang's Cloudchaser did not do anything for him during throughout this part of the game as he would end up destroying his own enchantments.

Then Chang made Aven Flock, and then Hydromorph Gull. Zhou dealt with it by casting Morbid Hunger on the Gull and Second Thoughts on the Flock when it attacked. Yujian was working towards filling his graveyard with cards with spells like Unhinge and Innocent Blood. Once he reached Threshold he played Frightcrawler. It went all the way.

Sometimes it's interesting to just generalize on how U/W decks play each other out? A point of damage here and there is dealt throughout the game and eventually it adds up - then there is either a 1) Cunning Plan, 2) Powerful Topdeck, or 3) Mana Flood that decides the game, which will probably have little or nothing to do with the added up damage. In this case, Chang's second-turn Mystic Familiar did seven points of damage to Zhou, another three life of Zhou's was lost when he flash'd back Crippling Fatigue to finish off a Hydromorph Gull (and an Aven Archer the first time around). He took another four points of damage from a Hydromorph Guardian, and paid three life to flashback Deep Analysis. This left him at three.

Chang was also brought to single digit life. Zhou's Pilgrim of Justice had nothing else better to do as it was unable to block the Familiar and managed to attack successfully three times. After the ground stalled with Testament of Fate, Yujian's Aven Flock continued the beats and contributed six damage. Rather embarassingly a Cabal Torturer took some time off terrorizing Chang's creature and swung in for a point. This brought Chang to ten. He played Teroh' Faithful and enchanted it with Ghostly Wings. Somewhere along the line Yujian managed to get Repentant Vampire into play and that got in another three points. The Torturer mised its way to another point of damage when Threshold was achieved and there was nothing left to torture. Chang was brought to ten again and Chang eventually replayed the Teroh's Faithful again. So after all the fighting and dying Chang remained at 14.

So the situation was fairly simple. Yujian was slowly fighting back to regaining the upper hand but he was low on life and it was not prudent to take unnecessary risks. He started aiming Morbid Hunger at Chang's head when he realised that Chua had a Cunning Plan. Actually it was not that Cunning because Chua started counting libraries fairly soon after he replayed his Teroh's Faithful.

But it was more cunning than Zhou expected. To quote from Blackadder, it was as cunning as "a fox which has just been appointed Professor of Cunning at Oxford University". Chang did his best to draw as little attention as possible to the Cephalid Coliseum he had in play. If Yujian had been more observant he would have realized he had three turns less than he thought he had to deal lethal damage. He didn't and when he cast Shelter when he had three cards left in his library Chang did not bother to respond with the Coliseum, and Liquified it instead just to irritate Yujian. When he had enough of the farce, Chang used the Coliseum during Yujian's draw step and progressed to the Finals of GP Kuala Lumpur 2002.