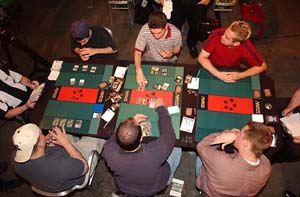 To be frank, 2020 was not favored to take this match. Courtney's Boys had drafted them into three terrible matchups, and it was only the cards they opened that kept it from being a blowout. They knew their position. Sitting down to the table they were not the model of resolve. This did not escape the notice of Reeves, Wise and Maher, who started to work their nerves. They seemed to sap the confidence right out of the Canadians.

Wise versus Wolfman was the first match off the blocks. Wolfman led with his combo of Trained Pronghorn and Spirit Cairn. Wise was without green mana, but still managed a Barbarian Lunatic. Wolfman pounded through and madnessed a Strength of Lunacy for extra damage and a flyer. Petravark removed his only plains. Then came Acorn Harvest to summon attackers, but Wise was behind in the race.

Neil Reeves stalled on mana in his game against Rood, managing only Mesmeric Fiend to steal Cunning Wish and then Frightcrawler. The Looter that could save him sat uncastable in his hand. Rood's beatdown was an anemic pair of Pilgrim of Virtue and Escape Artist.

At the far end, Pollock's opening of Nantuko Tracer and Ironshell Beetle was frustrated by Patrol Hound. Maher had plenty of time to make Mystic Familiar and Militant Monk. Phantom Flock sped up the clock.

Two turns from destruction, Pollock dropped his seventh land and summoned Phantom Nishoba. Maher didn't even bother looking worried, for he had Prismatic Strands in the grip. With the lifegain plan destroyed, Pollock tried to buy time with Arcane Teachings. Maher was ready with Ghastly Demise, taking the first game.

David Rood was also in trouble. His draw had stagnated, while Reeves had finally ripped Island and started Looting up more lands. It was steep downhill from there. Balshan Collaborator beat through Angelic Wall while Treacherous Werewolf chumped to keep his life high. In his hand were Faceless Butcher, Waste Away and Soul Scourge. Rood had nothing. Soon, the Canadians were two games back.

Before their spirits could collapse completely, Wolfman swung for lethal damage against Wise. The effect was immediate. Wise's mood darkened, and Rood and Pollock seemed to find themselves.

Maher started his second game with a less-than-spectacular draw. Pollock had Firebolt for Beloved Chaplain, then Twigwaler and Anurid Swarmsnapper. Maher got rid of the big blocker with Coral Net, but Pollock came right back with Grizzly Fate. Patrol Hound caught the second half of Firebolt and then Maher had just Angelic Wall for defense. He was at fourteen and falling fast. 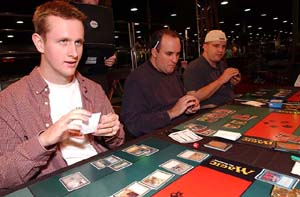 Wolfman kicked off his Game 2 with Mesmeric Fiend, stealing Petravark over Fiery Temper and Acorn Harvest, then Spirit Cairn. The Harvest started the beats, and the Temper took out Wolfman's Fledgling Imp. He tried Whispering Shade, but Wise hammered again with Seton's Desire and Sonic Seizure for the blocker, leaving Wolfman at twelve. Wise was out of gas, and Wolfman came back with a huge Earsplitting Rats. Wise's plucked Genesis was no use, and then he found two land waiting for him at the top of his deck. Wolfman drew Organ Grinder, speeding up the inevitable, and giving 2020 the first match.

Reeves had a slow draw for his second game, and Rood was quick to come down with Hapless Researcher and Skywing Aven. Peek gave Reeves a preview of Pilgrim of Virtue, Repel and Shelter, but he had no other play until a turn-five Soul Scourge. Repel sent it back. He waited on and end-of-turn Waste Away to force out the Shelter. Still, he was soaking a lot of damage, and didn't have a permanent answer to the Aven.

Reeves's only answer was to try to race. The Scourge came back only to be Lost in Thought, so that plan went out the window. Morbid Hunger helped take down Angelic Wall and buy a turn, but all Reeves's black creatures were no use against the lone Pilgrim. Suddenly 2020 were one game win away from taking the match!

The outstanding matches had to wait for the Budde - Fabiano match to end, since they would be on camera.

"So you're out, what, a hundred bucks?" - Josh Bennett

"I'm out a hundred fifty if I'm out a dime! Have you SEEN me money draft?" - Neil Reeves 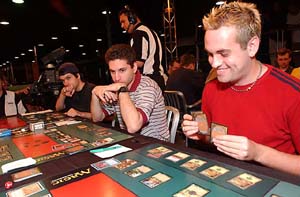 Rood was first on the board with Skywing Aven. Reeves answered with Cephalid Looter. Rood followed up with Hydromorph Guardian. Reeves's Organ Grinder traded with it in combat, and Rood busted out Cephalid Aristocrat. Reeves made a Whispering Shade with one mana up and took five more to fall to eleven. Rood added Aven Fisher and, holding shelter, tried to stay cool.

Reeves brought out Limestone Golem to snarl the ground, but he needed to answer the fliers quickly. They brought him to seven. He untapped. He looted, and with a grim frown tried a Morbid Hunger. The Shelter practically jumped out of Rood's hand. His excitement was evident even before he let out a "Yeah!" as Reeves announced the end of his turn. Rood had an effect. Cunning Wish served up Lead Astray with just enough mana left to cast it. Reeves's blockers were tapped, and Rood came across for the final seven points.

1 Waste Away 1 Carrion Wurm 1 Screams of the Damned

1 Screams of the Damned 1 Waste Away 1 Soul Scourge