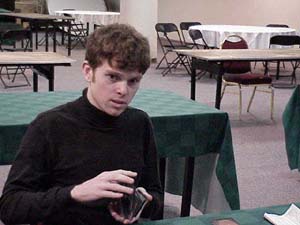 Parker came out quickly, using a Visionary to gate in a Silver Drake. Clegg's offense consisted of Thornscape Apprentice and Quirion Sentinel. He added an Amphibious Kavu, which hit twice before the Visionary came online and made attacking a liability.

With the ground stalled, Parker was free to Bog Clegg down. He chose to discard Obsidian Acolyte and Benalish Lancer. Though white was his main color, he had no Plains. A turn later, he was on the wrong end of Probe with kicker, losing a Samite Elder and a Serpentine Kavu, as compared to Parker's two lands.

Things got worse for Clegg when his draw yielded nothing and he had to watch Parker use a Dream Thrush to gate in a second Drake. He only bothered taking one hit from the pair of flyers before conceding.

Clegg had white mana early in Game 2, but his draw was slow. He made a Samite Pilgrim while Parker turned a Dream Thrush into a Silver Drake. Clegg didn't have another play. Parker replayed his Thrush and added an unkicked Prison Barricade. 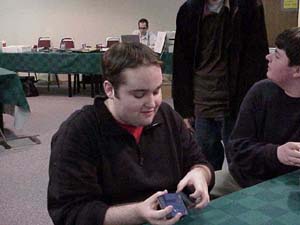 Clegg hit five mana and played a kicked Sunscape Battlemage, taking down the Drake. Parker's Thrush got him a Swamp, and he used the mana to summon Ertai, the Corrupted. Clegg only had one turn before Parker could dictate which spells he could cast. He made a Serpentine Kavu and hasted it up for four points.

Parker's kicked Bog Down stripped Clegg's hand, and Shackles locked the Serpentine down. Now he had the game in hand. Clegg tried a kicked Benalish Lancer, but Parker sacrificed his Dream Thrush to counter it. He untapped and played out Samite Archer and Cursed Flesh on the Battlemage. The Pilgrim died at the Archer's hands two turns later.

Things just went downhill for Clegg from there. Parker started firing on all cylinders, laying out Benalish Heralds, Stormscape Apprentice and Angel of Mercy. Clegg had saved up a handful of good spells, but it really didn't matter. Clegg conceded with a couple of turns of play left, saying "Let me have my whole deck, and I'll still lose."