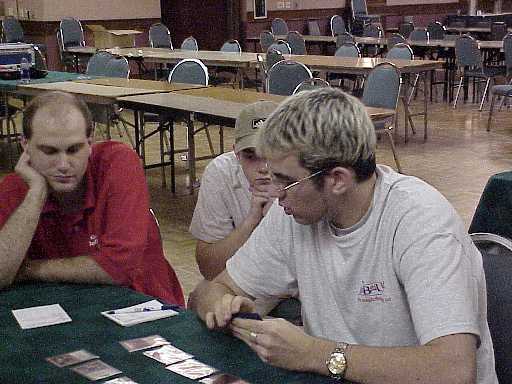 With Chris Benafel on an impressive streak as of late, you'd think that he'd be the hotter of the two players in this match. However, with a 14th place finish at World Championships and a semi-final appearance at PTNY, it's Dan Clegg who seems to be hitting his stride at the right time.

Game 1 started fast, with Clegg playing a first turn Stormscape Apprentice, which was fittingly met by Chris' Thornscape Apprentice. Dan cast a Hate Weaver on turn two and then played a Plains on turn three, relinquishing the turn to Benefel. Chris, whose personality seems to change with his opponents, kept the banter lively as he cast a Pincer Spider, possibly hoping to keep Clegg from achieving full concentration on the task at hand.

Benefel seemed to be gaining control of the situation by casting a Voracious Cobra, while joking about the uselessness of his Apprentice, a direct result of his continually tapping out. Clegg played a Phyrexian Reaper, but this didn't stop the Cobra from attacking, and when Chris played Plains after casting Razorfoot Griffin, the Apprentice started realizing its full potential. 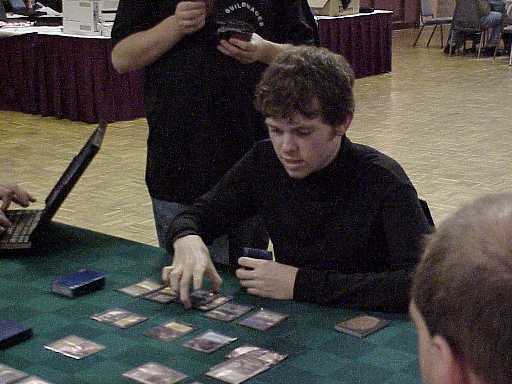 Not one to back down, Dan continued playing the fat creatures, with his next turn producing Dromar's Attendant. Benafel continued to attack with his two first strikers and cast another, a second Griffin, but started looking a little worried when, upon Clegg's draw, Dan uttered 'God damn, how did I get so tight', suggesting he'd just drawn a key card at a key moment in the game.

Attacking with his two 3/3's, Dan was able to gain card advantage by casting a Recoil, returning the Pincer Spider which had gang blocked the Attendant to Chris' hand, the result being the death of his Griffin. With Chris obviously on the defensive now, he was able to keep things close to even keel by casting an Angel of Mercy, his third flyer of the game.

It was at this point that the Dan Clegg of old reappeared. Clegg, who has recently sped up his rate of play noticeably, started thinking about his next move, sitting motionless for the next five minutes. Finally, amidst comments from spectators, judges and Benefel, Dan finally cast Mourning on the Cobra, which was seemingly holding Clegg's offense at bay and attacked with his two 3/3s and his Dream Thrush, which Clegg would gladly trade with Benefel's Angel. Benefel, noting that Clegg had no black mana available, willingly threw the Cobra in front of the Phyrexian Reaper, taking five points of damage.

With Benefel playing his Spider again, he attacked with his flyers and Shackled the Reaper, bringing the score to 10-5 in Chris' favor. Dan attacked with the Attendant bringing the score to 7-5 and then cast a Ravenous Rats despite Chris' not having any cards in hand. Relinquishing the turn, Dan could only wince as Chris celebrated his draw of Simoon, killing four creatures including the Dream Thrush that could have blocked the Angel, and the game went to Benafel. 1-0

Between games, Chris continued celebrating his top decking skills, obviously trying to keep Clegg's hurt on the surface. Dan avoided Benafel's attempts at conversation, but was obviously not pleased at the turn of events. Eventually, Chris' attempts wore Dan down and the two started exchanging banter. 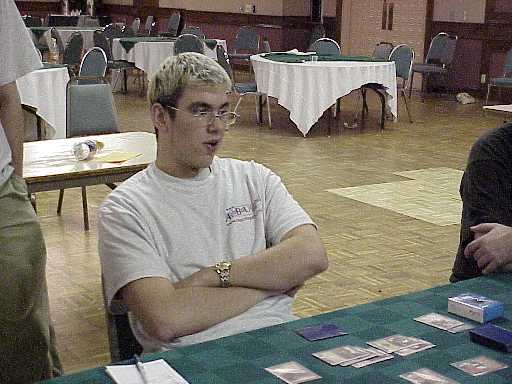 Game two started the same as game one, with the two combatants playing their respective Apprentices. With Dan casting a second turn Dream Thrush, he attacked, offering an exchange, but Chris declined, taking the point of damage. Chris was able to accelerate his mana by casting a second turn Quirion Elf, but Dan did the opposite, stalling at just two Islands and being forced to tap both of his creatures in order to tap the Elf in an attempt to slow Chris down.

Chris continued the 1/1 trend by casting Obsidian Acolyte as Dan once again failed to draw or play a land. When Chris attacked with the Acolyte on his turn, Dan, trying to get around the Thornscape Apprentice' first strike ability, decided to block with both of his creatures. Chris had an Explosive Growth waiting, but Clegg had a surprise of his own, Prohibiting the Growth. With the result of this being the Acolyte trading with the Stormscape Apprentice, Chris knew that his Cobra would be free to attack, and cast it accordingly.

Dan finally drew a long awaited plains and immediately cast Probe in an attempt to find some more mana for the obviously explosive hand he had waiting. Without a time limit hindering him, Clegg took close to five minutes in deciding which two cards to discard to the sorcery. Finally deciding on Duskwalker and Glimmering Angel, Clegg relinquished the ten-minute turn only to have Benefel attack, cast a Razorfoot Griffin and say go in the space of fifteen seconds.

Finally having mana to use, Dan unleashed one of his deck's many bombs: Nightscape Master, but Chris again had an answer in the form of Shackles. While Chris did not have a Plains available to return Shackles if Clegg were to return the Master to his hand, he knew that he was applying enough pressure that Clegg could not spend two turns trying to get the Master back into play.

Clegg's turn once again saw him take an extraordinary amount of time to make his decision, but this time he got results. While he only used it to cast a Hate Weaver, Benafel was obviously a little irritated with how long things were taking, and said 'sure, no counter' in response to the Weaver. When Benefel attacked with the Griffin and the Cobra, Clegg activated the Master, returning the Griffin to Chris' hand while activating the Dream Thrush and turning Benefel's lone Plains to a Mountain, meaning Chris wouldn't be able to recast. Unfortunately for Dan, the plan didn't work, with Chris laying a Plains before casting both the Griffin and a Sparring Golem. 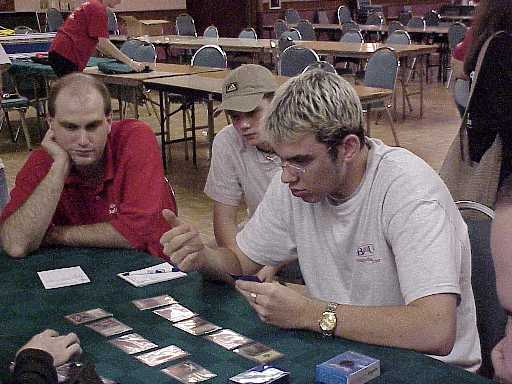 With Chris now tapped out, Dan now saw what may have been his opportunity. With two each of Plains, Islands and Swamps in play, Dan activated the Dream Thrush, turning a Plains into an Island and casting Distorting Wake, returning the Master (Thus destroying the Shackles), Cobra and Griffin to their respective owner's hands. This gave Dan the opportunity to get some non-land permanents into play, but after a prolonged exchange that saw the Master buy Clegg a half dozen turns, Benefel was able to get a Rampant Elephant into play, which, combined with Clegg finally drawing into a mana clump, allowed Chris to attack with everything for the win, sending him to the finals against Canadian Matt Vienneau.