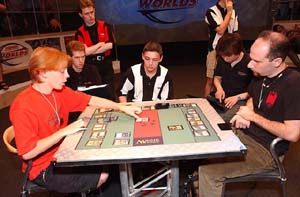 When good things happen to YMG, it seems they come in groups. Dave Humpherys was joined in this Worlds Top 8 by the recently-annexed Gabe Walls, but the hope of an all-YMG finals was dashed when Tuomo Nieminen bested Walls in the quarters. Now it's up to The Hump to win it for the red and black (and by extension, the red, white and blue). His blue-green deck narrowly escaped a nightmare matchup against Wolfgang Eder in the quarters, and now he's up against a much easier foe: Wake.

It's being piloted by former German National Champion Daniel Zink, who must be fired up to revenge his countryman Eder's defeat. Never mind that Peer Kröger dropped to Okamoto's Wake in the quarters, leaving Zink as the lone hometown hero in the running. You've got to figure the whole audience is behind Zink in this one.

Humpherys had to send his first hand back. He drew his next six slowly, and shuffled them around in his hand before announcing that he'd keep. Having lost the coin flip, he was heavily on the back foot. Zink kicked off with a pair of Krosan Verges, and Humpherys was first on the board with Aquamoeba. It hit for one, and Humpherys added a Mongrel to his team. Zink cracked a Verge and untapped. His second island made his fifth land, and he chose to give the turn back to Humpherys rather than risk tapping out for Mirari's Wake. He also held Renewed Faith and Deep Analysis, along with three lands.

The Hump pulled up his next card and ran some calculations. He chose to play Quiet Speculation. Zink cycled his Faith in response, but drew a blank. Humpherys searched out two Roars and a Ray of Revelation. Zink remained impassive. He took three from Humpherys's crew, and cracked another Verge. He untapped and dropped Mirari's Wake, looking for the go-ahead from Humpherys. Humpherys allowed it, and the extra mana let Zink play his Deep Analysis, drawing Wrath of God and a land. As expected, Humpherys's Ray took out the Ray at end of turn.

Hump hit again, bringing Zink to fifteen, and made Wurm token with a single island up. Zink drew his card slowly, desperate for a Mana Leak. None came. Decree of Justice showed up in its stead. He tried the Wrath, and it resolved! Humpherys's team went to the bin, and Zink breathed a sigh of relief. He flashed back his Analysis, drawing Vengeful Dreams and Renewed Faith, then gave it back to the American.

Careful Study got rid of two of Humpherys's lands. He swung in with his Wurm, and Zink tried a Vengeful Dreams, pitching his Elfhame Palace. Humpherys had the Circular Logic, and Zink fell to six. He went to five fetching out an island. He Compulsioned away a land, then untapped and pulled up Wrath of God. Humpherys's Wurm went away and Zink got ready to cycle Decree of Justice. Thirteen 2/2's prompted a concession from Humpherys.

Humpherys shook his head very slightly as he sent his first hand back to the library. It seemed like it wasn't his day. He rolled his eyes at his next six, but chose to keep. They looked pretty good when he opened with Mongrel and Arrogant Wurm, but Zink's Krosan Verge and Skycloud Expanse fueled a Mana Leak to keep the pain to a minimum. Zink played an island and ended his turn. Humpherys got in for two and started thinking. He tried a second Mongrel. Zink allowed it. He cracked the Verge and untapped. 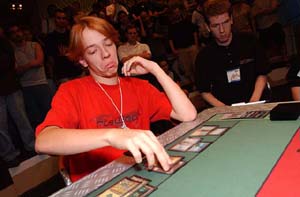 He made Compulsion and ended his turn. An attack from Humpherys was blunted by Moment's Peace. Zink stood his ground. Humpherys tried again. This time Zink played Cunning Wish. Humpherys let it resolve, and Zink fetched out the mighty Wing Shards to clear out Humpherys's team. He had to tap out to do it, though, so Humpherys was free to Speculate for a Ray and two Wurms. Compulsion fell to the wayside, and Humpherys made an Aquamoeba.

Zink gassed up with Deep Analysis. Humpherys hit for one, and tried a Wurm. Zink showed him Mana Leak. Another Analysis followed, and he flashed it back, fearing nothing that Humpherys could bring to the table. He stood at eleven life. He permitted himself a small smile at his position, and his posture became that of bored confidence. Humpherys tried to find a way to get in the game. Careful Study got rid of some useless lands, and he flashed back his other Wurm. Zink Wrathed his team away and made another Compulsion.

Humpherys had the Nantuko Vigilante at the ready, but it was little more than an annoyance. When it swung in, Zing Cunning Wished for Hunting Pack, making two 4/4's and ambushing the Vigilante. Careful Study turned up nothing much, and now it looked like a formality. A turn later Humpherys conceded.

Though both players made a production of shuffling their sideboards into their libraries, neither actually made a change. Again, Humpherys had to mulligan, but he didn't stop at six. He went to five, and then, seeing no lands, went to four.

"I'm not aggressively mulliganing, I just need something!" – Dave Humpherys

Humpherys looked at his four cards and laughed.

"I guess I'll try this one!" – Dave Humpherys

While Zink got out two Verges and an island, Humpherys had no pressure. He finally played a Quiet Speculation on his fourth turn, getting a Ray, an Analysis, and a Wurm.

"And you still have seven cards, eh?" – Dave Humpherys 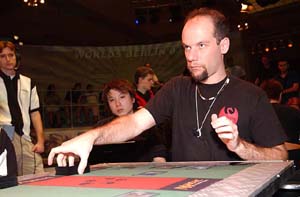 Zink popped a Verge and played it cagey. He was holding Renewed Faith, three Wraths and a Mana Leak, so he had little to worry about. He shut down Humpherys's attempt to flash back the Analysis. Activating the other Verge gave him still more mana to work with. He pulled a second Leak right off the top. Humpherys tried a hard-cast Analysis. Zink cycled his Faith, finding Exalted Angel, and then let it happen.

He still didn't commit anything to the board on his turn, though. Humpherys flashed back an Analysis and made a Wild Mongrel. Zink eagerly started shuffling his Wraths. He tried one on his turn, but had to spend a Mana Leak to get it past Humpherys's Envelop. Humpherys replaced his Mongrel and gave it back. Zink dropped another Wrath. This one went uncontested.

Humpherys played Arrogant Wurm the hard way, and Zink busted out a morph. Humpherys was fast running out of options. He played a Roar, and then had to put his Wonder into play. Zink could taste victory. Humpherys had just a City of Brass open. Zink flipped up his Angel, untapped, and served. Humpherys chumped with Wonder. Zink showed him Wrath of God number three.

Humpherys had no play.

Zink passed it back just as quickly, with Decree of Justice in hand. He made seven men at the end of Humpherys's turn. Hump played it to the bitter end, but that was much sooner than he'd have liked. He laid his worthless cards face-up on the table, and extended the hand in defeat.