his match featured one of the most impressive creatures that I had ever seen: a 23 power creature with vigilance, lifelink, first strike, trample, and hexproof.

But to tell that story, let me start at the beginning. After twelve grueling rounds of Modern Masters draft, Standard, M14 draft, and Modern, there was one person who had the best record across sixteen of the world's best Magic players at the World Championship. The name of that player was Reid Duke. Duke, who stormed onto the scene as a Magic online superstar and who is one of the nicest guys you will ever meet, finished in last place in last year's Players Championship. This year, he embarked on a mission to redeem himself. He posted excellent finishes at this season's Grands Prix and Pro Tour, racking up enough points to earn himself a qualification for the World Championship. And during the Swiss rounds, he didn't just redeem himself. He utterly devastated the competition. But that was a couple of days ago, and now we were in the Top 4 playoffs.

In the semifinals, Duke was facing Josh Utter-Leyton, the reigning Player of the Year. You can always count on Utter-Leyton to consistently finish deep in the money at premier events. He made it to the Top 8 of a Pro Tour four times over the course of his career, and he now added an excellent performance at the World Championship to his impressive resume.

The format for the Top 4 is Modern. Duke was playing Bogle, a deck based around creatures with hexproof such as the eponymous Slippery Bogle and a ton of auras such as Spider Umbra. Utter-Leyton, touted by many as one of the top current deck builders in the game, went for individually good cards rather than synergy: he built around the creature trio of Deathrite Shaman, Tarmogoyf, and Dark Confidant and opted to go for a two-color deck with Tectonic Edge rather than branching out for Lightning Bolt. 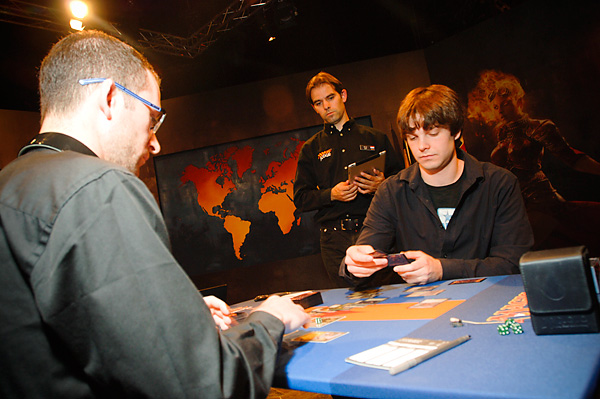 "It's a close matchup; anyone can win," Duke said before the match, with Utter-Leyton nodding in agreement.

As the players sat down, head judge Jason Lemahieu went over the specifics of the big camera match with them, prompting Duke to ask a question.

"You know, if you're as nice as people say, you might as well draw first," Utter-Leyton suggested in jest.

Being on the play was extremely important in this particular matchup because it meant that Duke could cast one of his hexproof creatures before Utter-Leyton had a chance to snatch it from his hand with Thoughtseize or Inquisition of Kozilek.

And indeed Gladecover Scout came down on the first turn. Over the course of the subsequent two turns, Duke enchanted it with Hyena Umbra, Keen Sense, and Daybreak Coronet, and went to town. That's a 5/5 creature with lifelink, vigilance, and first strike that would draw a card every time it connected. 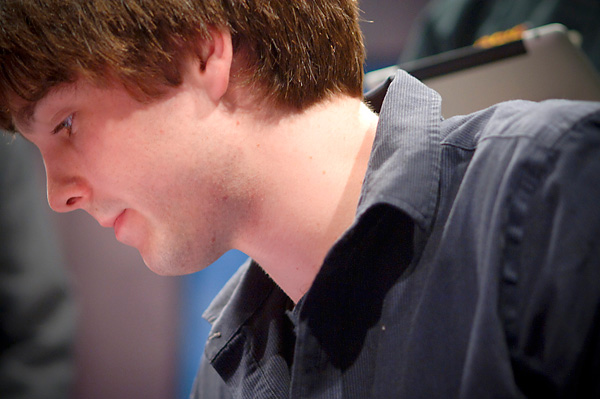 Duke looks to connect with his suited up creature.

Utter-Leyton decided that he could not allow it to hit him, chumpblocking at every occasion. He clawed back into the game with Garruk Relentless and Liliana of the Veil, but just when it looked like his planeswalkers could take over, Duke drew the card that he had been waiting for all game: Rancor. It allowed him to trample over and deal the final blow to Utter-Leyton.

This game didn't start well for Duke. In search of a reasonable hand, he went down to six, then to five, and then to four cards. Although his deck probably requires an aggressive mulligan style, going down to four cards was not what Duke had in mind.

With Inquisition of Kozilek, Utter-Leyton got to see those four cards: Gladecover Scout, Slippery Bogle, Horizon Canopy, and Unflinching Courage. He took out Gladecover Scout, and then Unflinching Courage with another Inquisition of Kozilek. Stripped off relevant threats, Duke was never in this game. When Utter-Leyton started attacking with 4/5 Tarmogoyfs, it was over. 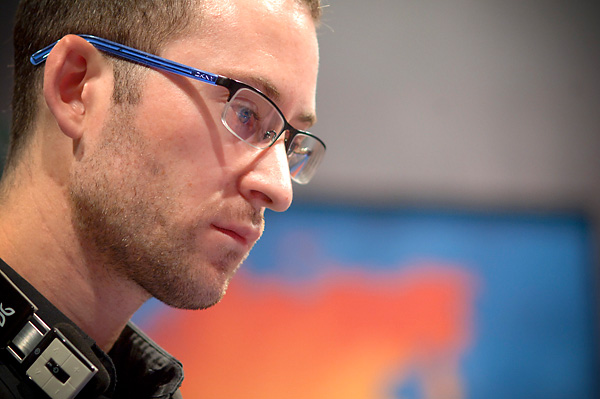 Utter-Leyton mounts a comeback and evens up the score.

Duke found a reasonable seven card hand this time around:

On turn one, he played Slippery Bogle, losing Kor Spiritdancer to Thoughtseize. On turn two, he drew Rancor, which was a big draw, as it turned on Daybreak Coronet. Nevertheless, Utter-Leyton had the Liliana of the Veil that Duke was fearing. It forced Duke to sacrifice a creature, a substantial setback.

But Duke wasn't done yet. He played Kor Spiritdancer and showed what his deck was capable of. Rancor, draw a card. Ethereal Armor, draw a card. Daybreak Coronet, draw a card. Hyena Umbra, draw a card. He eventually assembled a massive 23 power monster with almost every ability imaginable. It was good enough to take the game.

A turn one Thoughtseize revealed that Duke had mulliganned into the following six cards:

A couple turns down the road, Duke merely had Gladecover Scout enchanted with Hyena Umbra in play, while Utter-Leyton was drowning in card advantage thanks to Garruk Relentless and Dark Confidant. Nevertheless, Utter-Leyton was still vulnerable to top-decked auras, and didn't want to take any risks. He played Infest, killing off his own Deathrite Shaman, Dark Confidant, and a Wolf token in the process, to get rid of the hexproof Glacecover Scout. 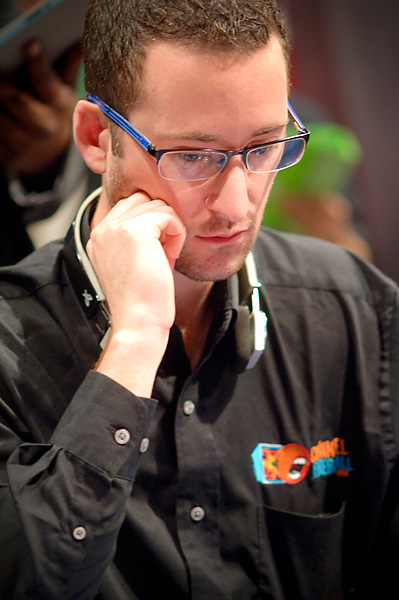 Utter-Leyton's discard effects begin to do their work.

"I have never Infested more of my own creatures than my opponent's before," Utter-Leyton commented after the game.

Despite losing almost his entire team, Infest ensured that Duke had no creature left to enchant. And Utter-Leyton still had Treetop Village and Garruk Relentless left standing, which started whittling down Duke's life total.

"Again, you have a chance to prove how nice you are. You can choose to draw first," Utter-Leyton said.

"I'll think about it," Duke answered noncommittally as he shuffled up. 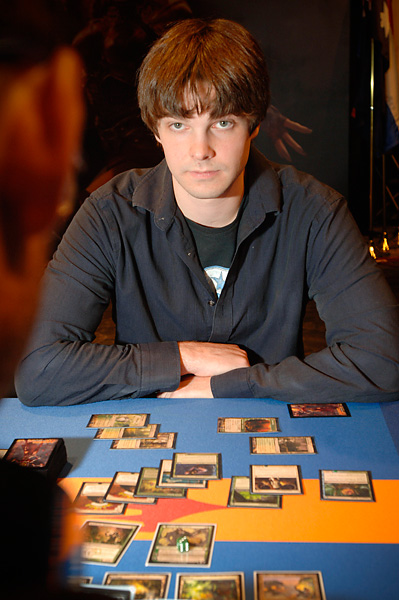 Leyline of Sanctity shut down most of the interaction that Utter-Leyton had against Duke's hexproof deck. It meant no more Thoughtseizes to discard cards, and no more Liliana of the Veil to sacrifice creatures.

Having shut down most of his opponent's interactive capabilities, Duke made Gladecover Scout and suited it up with Ethereal Armor. On turn three, Duke chose not to cast Daybreak Coronet, most likely playing around Abrupt Decay on his Ethereal Armor. When Utter-Leyton tapped out on his third turn, the coast was clear, and double Daybreak Coronet came down.

Safe from a single Abrupt Decay, the 11 power Gladecover Scout crashed in. Utter-Leyton started chumpblocking, buying time to draw into Maelstrom Pulse for the two Daybreak Coronets. However, the top of his deck did not contain the green-black sorcery, and he soon had no creatures left to block with. Tarmogoyf chumped. Treetop Village chumped. And then there were no creatures left. Utter-Leyton was already down to 1 life, and had no more defense. The only thing he had was Verdant Catacombs.

"Fetch," Utter-Leyton said as he cracked his land, deliberately choosing to take his last life by himself. 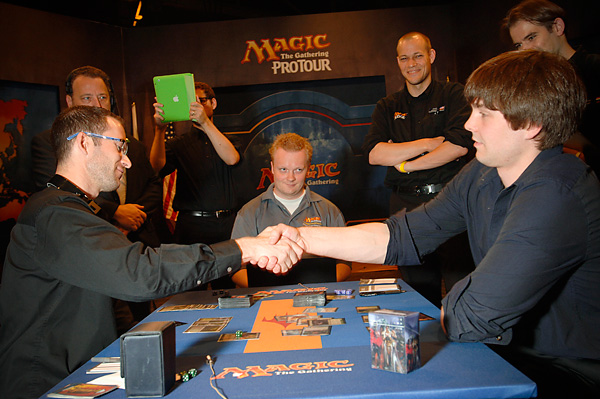 And with his fetch land crack, Utter-Leyton offered Duke the handshake.