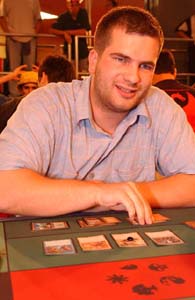 There has been plenty of hype surrounding Kai Budde lately, considering his win at Grand Prix London last week, and his strong showing so far in New York. Because of this, it's rather easy to overlook the abilities of his teammates, who are quite accomplished in their own right. Dirk Baberowski won Pro Tour Chicago 98, which was Rath Cycle Limited. Even though that was three years ago, it shows that Baberowski has an exceptionally good Limited game. His opponent, Andrew Cuneo, is no pushover either. Car Acrobatic Team has emerged as a group that can work incredibly well together. Even though Forsythe, Cuneo and Johnson may not have the individual accomplishments of their German opponents, they have proven to be one of the most consistent Rochester draft teams on the planet. They placed second at this Pro Tour last year, and have made their way to Sunday once again.

Cuneo drafted a solid deck, but most of his offense is on the ground. Baberowski's deck is filled with plenty of great blockers such as Prison Barricade, Ardent Soldier and Coalition Honor Guard. Plus, Dirk's deck has a good number of flying creatures in addition to a Slinking Serpent, while Cuneo only has two fliers. The matchup heavily favors Baberowski, but Cuneo can win if he gets a fast start and uses tricks such as Consume Strength and Darigaaz's Charm to take out Dirk's blockers.

Cuneo started first this game, and Dirk opened with Stormscape Apprentice. Nomadic Elf was summoned by Cuneo on turn two, and Baberowski continued his curve with Sunscape Familiar. Cuneo's Elf attacked, and Baberowski decided not to risk losing his Familiar to a trick, and took two damage. An Amphibious Kavu then joined Cuneo's side. Baberowski untapped, and Cuneo learned why Sunscape Familiar was an important part of Dirk's plan. A turn three Doomsday Specter was summoned, bouncing back the Stormscape Apprentice. Consume Strength was sitting in Cuneo's hand at this point, but wasn't going to get the job done against the Specter. Cuneo attacked with the Kavu and Elf, and took out the Sunscape Familiar with Consume Strength.

The Specter now went to work, and Cuneo lost a Horned Kavu, and was left with only a Gainsay in hand. This was followed by Baberowski summoning Coalition Honor Guard. All was not lost for Cuneo, who could use Nomadic Elf to activate the tapping ability of Thornscape Apprentice. It tapped down the Honor Guard on his turn, which allowed the Kavu and Elf to get through for four points of damage. The Specter attacked back and took away the Gainsay, and Baberowski brought out Stormscape Apprentice and a Sunscape Battlemage.

At this point Cuneo was up against the ropes, and made an odd play, enchanting Baberowski's Honor Guard with Foul Presence. Dirk was a bit perplexed by this, and asked "Is there a trick involved with this?" Apparently not. He untapped and used the Guard's new special ability to kill off Thornscape Apprentice. A Hunting Drake was then played, and Cuneo now had no cards in hand, and no non-land permanents in hand. From this board position, Baberowski had no problem winning the game. 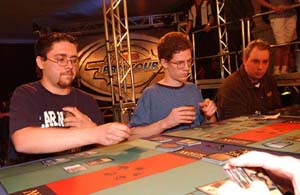 Cuneo went first once again, and started off strong with a first turn Thornscape Apprentice, and a second turn Nomadic Elf. Baberowski summoned a Nightscape Familiar. Turn three saw Cuneo bring out Horned Kavu, which bounced back the Apprentice. It would seem that Cuneo had an explosive start, if not for the fact that he missed his third land drop. Dirk built up his side of the board with Standard Bearer, but wasn't doing much better in the mana department as he missed his fourth land drop. Cuneo's Elf and Horned Kavu went into the Red Zone for a turn, and Baberowski found a fourth land, and used it to summon Ardent Soldier. This combined with the Nightscape Familiar already on the table would help Baberowski stabilize against Cuneo's stalled start.

Things became even better for Baberowski when he found his first island, which allowed him to play Tidal Visionary and Coalition Honor Guard in one turn. This stopped Cuneo's ground attack, and Dirk soon went to the air with Hunting Drake and Living Airship. Prison Barricade and another Ardent Soldier showed up in the following turns to further fortify his defense. A Slinking Serpent gave Baberowski an unblockable six damage clock, and the game was soon his.