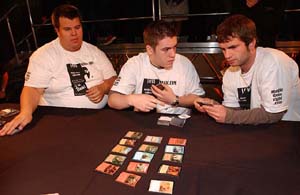 Not only had Phoenix Foundation only lost one match—ever—in Team Rochester coming into today's action but they had never lost an actual played match of the format at the Pro Tour. Their only loss came in the Venice Masters. You may be wondering about the losses that they posted yesterday but both of those were straight up concessions to Zabutan Nemonaut and The Brockerfellars. Both teams were playing in the Top 4 thanks to those wins.

The Brockerfellers are no slouches at this format either. The team has gone through a number of name changes from the eponymous Huey Brock and Linde, to the clever Brock Bottom at the most recent GP Pittsburgh to today's even funnier name. The B-seat third of the team won the previous Grand Prix Pittsburgh with Casey McCarrell and Ben Rubin while Brock took GP Turin with PTR and Dan Clegg. That's nothing compared to what they pulled off today. Their first ever Onslaught Block Rochester draft came in round seven. Years of experience and a boatload of talent seem to have paid off.

Kai Budde and William Jensen were facing off in the B seat and you couldn't ask for a more spectacular pairing. William Jensen is considered by many to be one of the top players in the world and bears the mixed blessing of being known as the best player to have never won a Pro Tour. Kai was going into this season hoping to take his fourth consecutive Player of the Year title.

Kai won the flip and chose to kick off, a decision that pleased The Brockafellars. They'd been choosing to receive all weekend.

Kai was pretty relieved after picking up a pair each of Lingering Deaths and Daru Spiritualists in the Scourge packs. Going into the final lap he had only an Aphetto Exterminator and a Skinthiner to cope with Jensen's Sparksmith. His deck was largely clerics with a smattering of soldiers. Unfortunately, among that smatter was an Aven Warhawk. "This is really annoying. I wanted some of the 3/6 soldier clerics but there weren't any and I only have three ways to amplify him." Two of those three ways were a pair of Daru Cavaliers.

Dirk was not keen on the idea of facing Akroma with his black-red deck. "If he doesn't have access to Akroma I probably win. That card is just a little bit unfortunate for me. My deck is a little bit slow. For example, my third Torrent of Fire is in my sideboard since my deck was quite expensive already.

Everyone seemed to agree that Marco was facing the best match-up of the three. In addition to a full suite of elf tricks he had a pair of Covert Operatives and an infinite mana engine with Wirewood Channeler and Pemmin's Aura. "My deck is insanely fast while his deck seems slow. He does have anElvish Warrior. The highest casting cost in my deck is five. I have Wirewood Elf and Wirewood Channeler—" 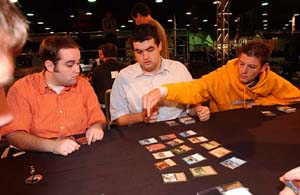 Dirk interrupted to point out, "That was their big mistake. Channeler is pretty much a bomb in this format and we were able to take it on the second wheel."

Phoenix Foundation found green blue to be a desireable strategy because of the Operative and the Coast Watcher which fills the two slot for the deck in the third pack. Marco's plan was to lock up the ground with Wirewood Symbiote and win with his Covert Operatives. "I think they undervalue that guy. He is not going to deal me any damage on the ground and I am going to kill him with the Operative...

"Unless he draws Krosan Vorine"

Huey did not have much to say about his deck or his match-up. He thought he had an edge in the match-up but he would not elaborate. He did mention that, "The gassiest part of the whole draft was Marco talking about doughnuts for twenty straight minutes."

Linde liked his chances against Dirk's deck despite the pair of dragons. "He has burn but for the most part his creatures aren't good." Linde had four different forms of counter magic to stall the game to a point where Akroma could make an appearance. He liked Brock's match-up as well until Marco found a pair of Symbiotes for his deck. "I think Huey's match-up is real close. He might be a little bit the underdog but he can still win."

Brock shared Linde's consternation about the Symbiotes. "I liked the match-up before he got the two Symbiotes. Before that he had only Timberwatch Elf. They passed me Ambush Commander and I'm nearly mono-green and I have Wellwisher."

Brock Parker, The Brockafellars A Seat

William Jensen, The Brockafellars, B Seat