In 2002 Pro Tour - Boston, Gary Wise was part of team Courtney's Boys. It made Top 4 back then, only to lose in the semifinals to 2020, who were definitely the underdog in that match. This year, Gary's teammates are Mike Turian and Eugene Harvey, and they're facing another underdog in Original Slackers. The Norwegian team went undefeated on day two, so it seems like they know what they're doing. 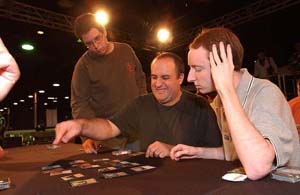 Zabutan Nemonaut was to kick off the draft. Gary Wise opened up a perfect pack to kick off with, containing Solar Blast, Pacifism, Improvised Armor, Swat, and Symbiotic Elf. The Canadian picked up the Solar Blast and Eugene scooped up the Armor, while his opponent Rickard drafted the Pacifism as an immediate answer to it. The Swat ended up in Jake's deck, and Symbiotic Elf was picked by Lovre, and could make the cut should he end up black-green or short on playables in general. Eugene's pack contained another Pacifism, along with a Battlefield Medic and Nantuko Husk. After a short debate, Zabutan Nemonaut settled for having Eugene pick the Nantuko Husk, which left Jake Smith without a pick from the pack that he'd end up playing. Lovre picked up Venomspout Brackus, Jake took Pinpoint Avalanche in case he'd end up red-black, and Rickard picked up his second Pacifism. Mike Turian d-drafted the Battlefield Medic from the pack, while Gary Wise drafted a Birchlore Rangers and Wirewood Herald from it.

The first booster for Original Slackers featured a second Venomspout Brackus for Lovre, along with an Ixidor, Reality Sculptor for Jake and a Dive Bomber for Rickard Osterberg. Zabutan Nemonaut drafted a Screeching Buzzard for Mike Turian, a Skirk Commando for Gary Wise, and a Glory Seeker for Eugene, rounding out the playables of that pack. Death Pulse and Pacifism were the Norwegians' next two picks, giving Rickard triple Pacifism in the white mirror. Nantuko Husk made it to Turian's sideboard, while Gary Wise picked up an Elvish Warrior, and Eugene a Festering Goblin and a Battlefield Medic. The next pack was unkind to the Norwegians. Grassland Crusader was the best pick that Rickard could find in it, and had to ship Mistform Shrieker to Mike Turian, another Wirewood Elf for Gary Wise. Eugene picked up a Crown of Suspicion. Krosan Tusker made it to Lovre's deck and Ascending Aven as the last playable card ended up in Jake's deck. The final Onslaught booster brought forth a Sparksmith for Gary Wise, a Tribal Golem for Mike Turian, and a Cruel Revival for Eugene Harvey. All they had to sacrifice for those cards were an Erratic Explosion, which ended up in Lovre's deck, and a Daru Lancer which ended up in Rickard's deck, along with another Battlefield Medic.

Mike's Legions booster didn't have a Timberwatch Elf in it, and as such, Zabutan Nemonaut wasn't punished for not having green in the A seat. It did provide Mike with a Smokespew Invoker. The Norwegians picked up an Aven Redeemer for Osterberg's deck, a Gempalm Polluter for Jake's deck, and a Krosan Vorine that ended up in Lovre's deck. After that, it was time for the Americans to divide more Gempalms--an Avenger for Eugene, and a Strider and Incinerator made it into Gary's deck, making it look rather powerful already. Rickard's Legions booster had another Aven Redeemer for him and a Smokespew Invoker for Jake Smith; Lovre had to settle for a Patron of the Wild. Eugene picked up a Daru Sanctifier and a Stoic Champion from the pack, giving him his first way to deal with Rickard's Pacifisms. Turian wheeled a Weaver of Lies from the pack, making sure he could remorph Lovre's Brackuses. Jake's Legions booster was up next, and it had the first Timberwatch Elf of the draft, along with a Skinthinner. Without much discussion, the Skinthinner ended up in Jake's deck and the Timberwatch Elf in Lovre's, whose matchup against Mike looked pretty good so far. Defender of the Order was Eugene's pick, while Gary picked up a Brontotherium and Mike settled for a Deathmark Prelate. Osterberg picked up Crested Craghorn, which was the last playable card in the booster.

Up next was a Goblin Goon for Lovre, which could be a problem for Mike if Lovre plays first. Eugene received an Aven Redeemer of his own, Gary picked up a Goblin Clearcutter to help out his mana curve and Sparksmith, and Mike picked up Withered Wretch over Smokespew Invoker, which ended up in Jake's deck. Osterberg picked up White Knight and Gempalm Avenger from the pack, and Jake picked a Crypt Sliver. On the way back, there were still some playable cards left in the pack, with Mike taking a Glintwing Invoker and Gary picking up a Patron of the Wild. The next Legions pack was quickly divided between the teams. Eugene picked up his second Aven Redeemer, Gary picked up a Timberwatch Elf, and Mike Turian received a Wall of Deceit against Lovre's green monsters. Crested Craghorn and Daru Mender made it to Osterberg's deck, while Riptide Mangler and Vile Deacon were added to Jake's arsenal. Lovre had to settle for a Branchsnap Lorian and Glowering Rogon. 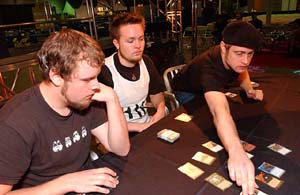 The last Legions pack was stuffed with goodies. Gary Wise received another Timberwatch Elf, and Mike Turian was forced to d-draft a Windborn Muse. Rickard Osterberg picked up an important Whipgrass Entangler for the white mirror, while Jake received another Vile Deacon and Lovre a Gempalm Strider. With four cards left in the pack for Gary Wise, Eugene took two blue cards to make sure that Gary would receive a pick from the pack. The Norwegian team picked up Gempalm Incinerator, Needleshot Gourna, and Krosan Vorine from the remains, and Gary ended up with a Wirewood Channeler.

Scourge was kind to the American team. The first booster had a Carbonize for Gary Wise and a Dragon Scales for Eugene Harvey. Mike picked up a Riptide Survivor and a Death's-Head Buzzard from the pack, while the Norwegians divided Alpha Status, Frozen Solid, and Zombie Cutthroat between them. The next pack had another Dragon Scales for Eugene, but they had to pass up on a Krosan Warchief and a Clutch of the Undead for it. Dragon Shadow made it to Turian's deck, and that was the end of the playable cards. Lovre's booster was rather good for the Norwegians--they picked up Torrent of Fire for Lovre's deck, Twisted Abomination for Jake's, and a Dawn Elemental for Rickard. They had to pass a Coast Watcher and Reaping the Graves to Mike, an Elvish Abberation and Krosan Drover to Gary, and Dragonstalker along with Aven Liberator ended up in Eugene's stack.

The next Scourge pack had another Krosan Warchief, which was hated by Osterberg. Jake picked up a Lingering Death; the only playable cards remaining in the pack were a Scattershot for Wise and an Aven Farseer for Eugene. Osterberg also picked up an Aven Farseer in the next booster, shipping a Shoreline Ranger to Turian, an Extra Arms to Wise, and Lingering Death to Harvey. Just a Scattershot remained for Lovre's deck. The final Scourge booster had what could be the final blow for the Norwegians. Another Krosan Warchief made an appearance and ended up in Wise's already insane red-green deck, and a Dragon Shadow was there for Turian. Bladewing's Thrall was Eugene's card, passing only a Coast Watcher to Jake Smith.

All in all, it seems as though Zabutan Nemonaut ended up on top. Gary Wise's deck is insanely good, while Jake Smith's looks decidedly mediocre, and Eugene Harvey's deck looks like it has an edge over Rickard Osterberg's. However, Osterberg does have three Pacifisms and a lot of utility creatures, but still, the matchup should be in Harvey's favor. Mike Turian's deck is not that great, while Lovre's is better than average. Still, it doesn't seem like this matchup strays that far from the 50 percent mark.

When asked, the teams agreed that Zabutan Nemonaut had outopened Original Slackers somewhat. Jake Smith though he was going to lose to Gary's insane deck but still had faith in his teammates winning their matches. Rickard Osterberg thought his deck was better than Eugene's, but he was worried about the two Dragon Scales that Eugene picked up in the draft. Lovre wasn't too worried about Mike's deck except for the Dragon Shadows he had picked up. Without them, he felt Mike had no chance of winning. The American team saw their matchups a little differently. Gary did think he was going to win easily, and Eugene thought his match would be a close call, but he has two answers to Rickard's Pacifisms, nudging the matchup in his favor slightly. Mike Turian thought he was going to beat Lovre by having a lot of two drops, though he did think the Venomspout Brackuses could be a big problem.