There was silence as the two shuffled up for their semifinal match. Toshiyuki Kadooka, fresh off defeating Luis Scott-Vargas in four games, was playing a three-color controllish deck featuring abundant card advantage. Elie Pichon, who had similarly dispatched Pat Cox in the quarters, was piloting an aggressive red-white deck. 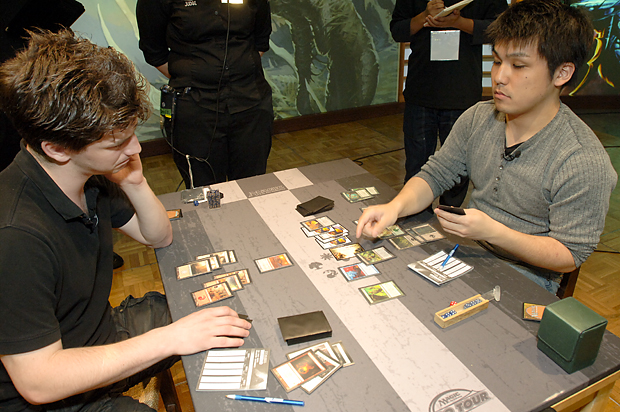 Elie Pichon and Toshiyuki Kadooka are both relative newcomers vying for the chance to battle it out in the finals.

Things looked grim from the start for Pichon. He had to mulligan down to five, while Kadooka started with a full grip. He stared at two Plains while Kadooka spilled out Viridian Emissary, Neurok Replica, Trigon of Corruption, then Cystbearer and Spellskite. A third Plains was no help. Pichon continued to block with his face, and they were soon onto Game 2. 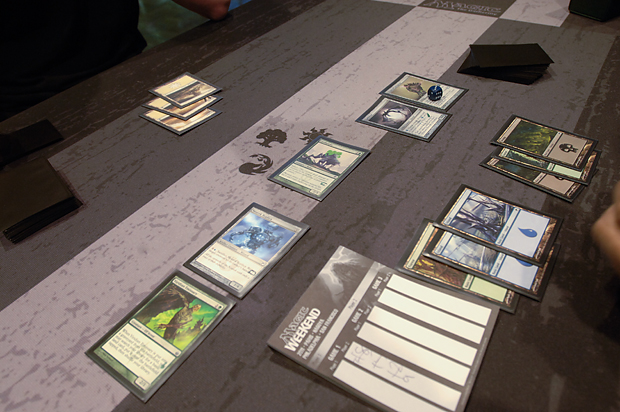 Pichon chose to play again in Game 2 two, and even got to start with a full grip. He started off with Embersmith and then Porcelain Legionnaire, though he had to pay 2 life as he was stuck on just a Mountain and a Plains. Kadooka spent a Grasp of Darkness on it at end of turn.

Pichon hit for 2 more, leaving Kadooka at 14, but could only add a frail Vulshok Replica to his board. Kadooka played his fifth land and sent that to the bin. A fourth land for Pichon, and with it a Slash Panther. Kadooka took 6. On his turn he played out Ezuri's Archers, readying his Anatomist.

On Pichon's turn he locked down the Panther and pushed his Archers in front of the Embersmith. A Mutagenic Growth from Pichon made the save. Pichon then summoned Leonin Skyhunter and passed the turn. 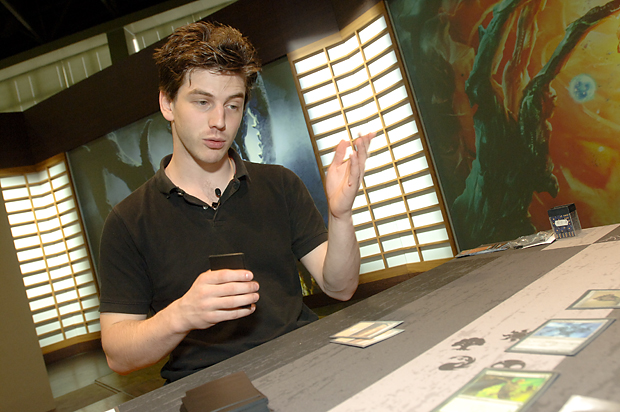 Pichon makes the best of what looks like an increasingly bad situation.

Kadooka played a land and passed it right back. Inside the combat phase, the Anatomist killed off the Embersmith and Slice in Twain dispatched the Slash Panther. The Skyhunter put Kadooka to 6. Pichon summoned Blade-Tribe Berserkers. Eight mana for Kadooka meant he could summon Pestilent Souleater and still keep the Skyhunter from attacking with the Anatomist. He did so, and Pichon declined to attack with his Berserkers.

On his next turn, Kadooka put the final nail in the coffin: Treasure Mage, searching up Thopter Assembly, then playing it. Pichon had no immediate answer. Viridian Claw wasn't exactly what the doctor ordered. Another blank draw, and Pichon was scooping up his cards.

Kadooka untapped and further cluttered the board with Treasure Mage (no prizes for guessing what he tutored for) and another Viridian Emissary. Pichon's response was an anemic Leonin Skyhunter. The Assembly hit the battlefield. Pichon sent it away for a turn with Banishment Decree, and traded his Skyhunter for Kadooka's Archers. Pichon surveys his dwindling options as Kadooka waits for a play.

Kadooka kept on the Assembly plan. Pichon shrugged and played Metallic Mastery, getting in 5 damage but unable to sacrifice the Assembly. Kadooka got his squad of tokens and swung for 4 with his Viridian Emissary and Treasure Mage. Pichon took the damage and watched the Thopter Assembly hit play yet again.

Pichon drew, played his seventh land, and shook his head. He passed the turn. Kadooka decided to spoil any surprises with Entomber Exarch on Pichon's hand. Pichon Artillerized the Assembly in response, but it was a Pyrrhic victory. He had just Kuldotha Ringleader left in hand. He checked his top card, and then extended his hand in congratulations to Kadooka, drawing a huge cheer from the Japanese spectators. Toshiyuki Kadooka defeats Elie Pichon 3-0 and advances to the finals!