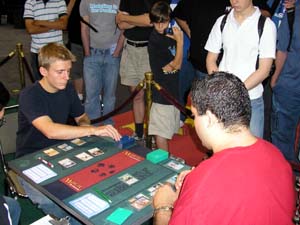 A seat on the U.S. National team stood in the balance between Patnik, left, and De Rosa.

winner of this match advances to the finals and the right to face Neil Reeves for the title of U.S. National Champion 2005. The matchup is one of the most important in the evolving metagame: Blue UrzaTron, unquestionably the breakout archetype of the tournament, put three players in the Top 8… but if this juggernaut has a kryptonite, a silver bullet, a garlic-encrusted wooden stake, it may be White Weenie.

Antonino De Rosa has acquired a stack of Grand Prix Top 8s over the course of his career, and the title of U.S. National Champion would be a fine feather to add to his already nicely decorated cap. He is confident in his deck, tuned by Gerard Fabiano and the rest of their team to hammer a metagame previously defined by Tooth and Nail.

Across the table is a player who also took the metagame by its horns and mastered it with an unlikely weapon of choice. With his main-deck Worships, Michael Patnik took apart the dominant Red decks - Red Deck Wins was the second most played archetype of the tournament - and even used Worship in combination with Damping Matrix to steal a game from Tooth and Nail in the Swiss ("He didn't have Shaman main.").

Speaking of Damping Matrix, it is one of the main cards De Rosa must fear in this matchup. Bombs he has, game winners aplenty, but Mindslaver, Meloku, and Triskelion all bow down to the three-mana Mirrodin artifact.

Michael opened on Isamaru, Hound of Konda while Ant started with an Urza's Tower. Leonin Skyhunter joined Patnik's side and Antonino played a second Urza's piece and a Talisman of Dominance.

Antonino stayed in the game mostly by virtue of his turn-two Talisman of Dominance. He was able to get a Triskelion at one point, but the Matrix prevented that from being anything but a big wall. A couple of flyers later and the pair were shuffling up for Game 2.

Michael brought in Jinxed Choker and Terashi's Grasp, a closer and a further disruptive element, creating a hostile environment for an artifact-driven control deck.

He once again opened up with a quick Isamaru, Hound of Konda, but would soon get acquainted with Antonino's favorite sideboard card.

This game De Rosa ran out one, two, three Sun Droplets. The first one bit a Terashi's Grasp, but a subsequent Grasp traded with Mana Leak instead. With his Droplets in play, damaging Antonino was an uphill battle to say the least. Ant could gain essentially four life per turn with two Droplets, meaning that either a lot beatdown or a Glorious Anthem are needed to bust through.

Michael got a Glorious Anthem to stick, but his alpha strikes were doing very little against two Sun Droplets. Antonino meanwhile built on his position with Solemn Simulacrum and had an Annul for Patnik's next Anthem. Eventually De Rosa added Triskelion to his side of the board and ended any attacks for several turns.

Once all the counters were exhausted on his two Sun Droplets, Antonino was up to as much as 36 life. It was at this point that he started to tap his Talismans for actual blue mana so that he could get more counters on the Droplets and actually gain life from the supposed drawback. Michael conceded to Meloku and a handful of counters. 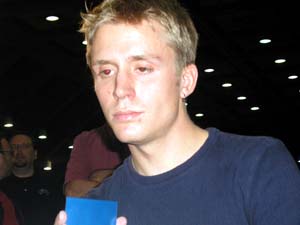 Patnik had his characteristic one-drop start with a Lantern Kami and an Isamaru… but Antonino had his own characteristic defense: two Sun Droplets on successive turns. Michael got one with a Terashi's Grasp, but the other kept him from really taking a chunk out of his opponent's life for a long time.

Antonino drew into mana and traded spells with Michael. Condescend your Jinxed Choker. Condescend your Glorious Anthem. Sure, the second Anthem Sticks. Echoing Truth and Annul it. All the while Sun Droplet was keeping its master alive.

Once the endgame hit, Antonino played a pair of Triskelions that had the White Weenie creatures completely outclassed. After his Damping Matrix met its end with Annul, Michael had no choice but to concede to the Clouded Mirror of Victory that Antonino flashed him.

This one looked bad for Patnik from the start. He missed his one drop for the first time in the match. Sure, he had a Skyhunter to follow, but true to form, De Rosa had a Sun Droplet on his second turn.

Michael got some position via Anthem and Matrix, but Antonino had, gruelingly, another Sun Droplet. Patnik tried for Jinxed Choker, which stuck, and Hokori, Dust Drinker… cards that are usually pretty good in the matchup. This time, though, with multiple Sun Droplets on his side, Antonino was able to stay in the game; via his artifact mana, it seemed like Hokori was actually hurting Michael more than Ant. 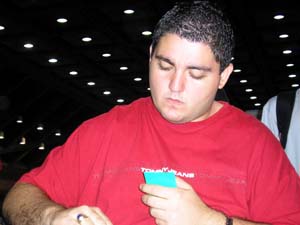 De Rosa's Droplets kept him ahead of the damage curve.

Over the course of several turns, Michael may have actually taken too much damage from his own Choker. Thankfully, Antonino chose to Echoing Truth it rather than risk the symmetry… but the damage had been done; Michael's life total was low enough that his control opponent could actually start racing when he found a Triskelion.

Faced with a tough decision, Patnik pointed his Terashi's Grasp at one of the mighty Sun Droplets, hoping to race or bust through the merely huge Triskelion later… But Antonino would have none of this, drawing his eighth and ninth defensive Droplets of the match. De Rosa's fortress was ultimately too much for Michael to overcome. He'll have to beat Jon Sonne in the consolation round if he wants to make the US National Team.

Via his impregnable defense, Antonino De Rosa advances to the U.S. National Team. Michael picks up an invitation to the World Championships, but it is unclear if he will be competing alongside the team or just an alternate. The outcome of the Patnik vs. Jonathan Sonne matchup will tell that tale, while Antonino De Rosa will take on Neil Reeves in a blue-on-blue matchup for a lot of bragging rights… and one-third the prize money!