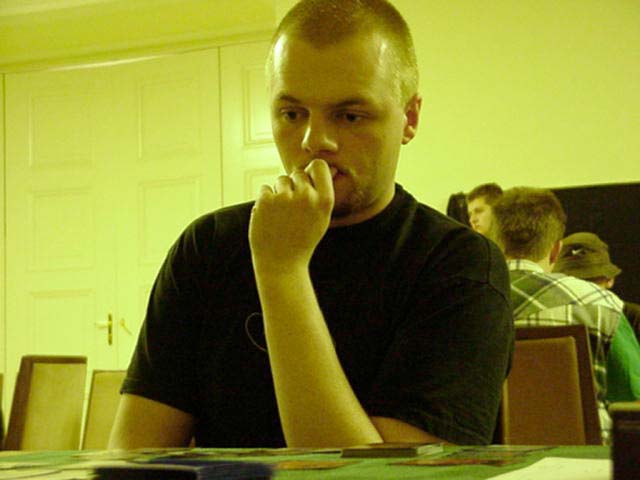 Ah, the Norwegian battle between two good friends, both of whom had claimed European Champion titles in their Magic careers: Nicolai in 1999 and Eivind being the current. As Rune said: "Why did you guys fly all the way here just to play each other?" The whole match was conducted in good humour as both players insisted on quoting John Malkovich's character from the film 'Rounders'.

Nicolai won the toss and elected for Nitter to go first, who launched into play with a turn two Cephalid Scout, followed by an Aven Fisher. Herzog replied with a Phantom Whelp and an Ember Beast, Dematerialising the Aven Fisher so he could serve for five, but the Whelp had to return to his hand.

Nicolai had commented earlier after he had drafted his deck that he was going to have trouble against 3/3 fliers, and sure enough his opponent managed to make a fifth turn Aven Windreader. Nicolai replied with a Frenetic Ogre. Eivind served for four with his two fliers then re-made the Aven Fisher, challenging Herzog to race him. Herzog obliged him and swung back over with his Beast and his Ogre, the first of which was chumped by the Fisher, then he re-made his Whelp.

With the life totals at 13 a piece the Windreader and Scout whipped across the skies again, then Nitter played a Luminous Guardian, which was duly Dematerialised. Nitter bluffed the Shelter for a bit then returned the creature to his hand, taking 13 from the Whelp, Ember Beast and a doubly-pumped Frenetic Ogre. Nitter had no answer and was reduced to zero life in seconds.

Eivind decided he would play first in this second game, casting Peek on his first turn to reveal the second turn Mad Dog that would start savaging him in the subsequent turns, after a Beloved Chaplin was Syncopated.

The Mad Dog was then joined by a Dreamwinder, and Nitter started his usual jovial complaining frenzy.

The Mad Dog eventually bit the dust as it had to run into a Master Apothecary, and Nitter started sounding very confident about the match when he laid his Balshan Griffin with two Clerics on the table, the second of which was a Pilgrim of Virtue.

In his next turn the European Champion tapped out to make an Aven Fisher and a second Pilgrim of Virtue.

"I can't win this one", informed Herzog, but he played on, Dematerialising the Master Apothecary who responded by shielding damage. It served no purpose other than to prevent the savage beating he was taking though, as both the Aven Fisher and the Griffin sailed across in the next turn, and the Apothecary was re-cast. Once again Nicolai Dematerialised the Master and served with everything he could, but a shield had been set up on one of the Pilgrims, so when Herzog attacked with his Ember Beast, Anarchist and Dreamwinder all Eivind took was three damage. 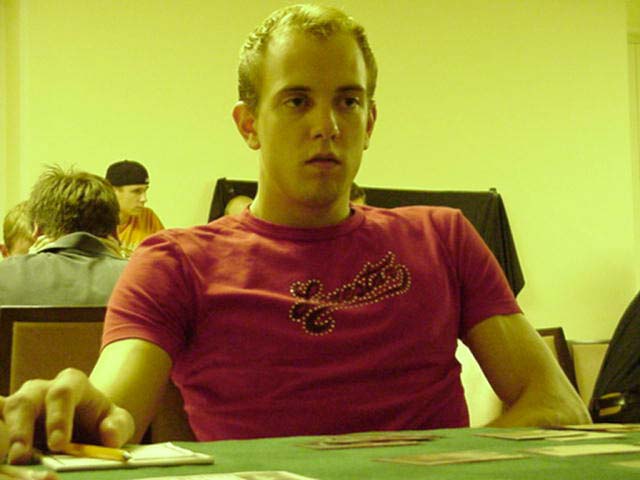 Herzog then pulled a swift one: he used his Dreamwinder to turn one of his opponent's three plains into an Island, which prevented Nitter from being able to cast his Apothecary. He then followed this up with Aboshan, Cephalid Emperor, but the land he had sacrificed to his Dreamwinder was his third island, and he only had two left at this stage to fuel the Legend. Herzog then attacked with his Ember Beast and the Dreamwinder, but the latter was removed from the game with Second Thoughts. With the Serpent dead and unable to change the third plains into an island, Nitter was able to recast his Apothecary.

I suppose the board situation really looked like at this stage that if Nicolai had not sacrificed that island he would be winning, but he was not to know he would draw the Emperor and stopping the Apothecary seemed a reasonably strong play.

Nicolai then tried to cast an Ashen Firebeast, but it met a Rights of Refusal and the board looked grim for Herzog as he was facing down a Windreader, Griffin and Cloudchaser. Dematerialising one of them did nothing to stop him dying two turns later.

Herzog sideboarded in a Kirtar's Desire, Angelic Wall and Shelter along with two Plains and a white sac-land, but drew all three in the early game without a white source in this final match.

Eivind riskily took a one-land hand going second with a Peek, but the Peek was Syncopated! Luckily Nitter managed to not only draw two more land by turn three - but one of each land type: Island, Mountain, Plains, then he made a Pilgrim of Virtue.

Nicolai then attempted to Blazing Salvo the Pilgrim, but Nitter took five to the head and said "That is a mulligan for you."

Eivind Nitter is known as 'Urza' Nitter due to his ability to have one land of each in the early game (i.e. Urza's Tower, Mine and Power Plant). However his land dried up at three whilst Nicolai was stuck on four by turn six, with only a Mad Dog to show for as his ember Beast was Syncopated.

Oops. Nitter once again created the combo that had caused his opponent so much trouble in game two: Master Apothecary and Pilgrim of Virtue. This he followed up with an Aven Cloudchaser after the Mad Dog had run blindly into the Cleric and perished. The Cloudchaser sprouted a friend - Aven Smokeweaver, and Nicolai started looking totally dejected about the situation.

A Windreader was dealt with thanks to a Kirtar's Desire, and Nicolai did manage to make a Chanflinger and an Angelic Wall to hold the beats for a while, but the fliers kept coming and coming - joined by a Balshan Griffin. In the last turn of the match Eivind decided to attack not just with three fliers, but also the Master Apothecary. Before declaring blockers Herzog cast a Shelter on his Chainflinger and tried to hold off the onslaught, but the Pilgrim of Virtue was able to stop anything the flinger tried to kill and the match was won.