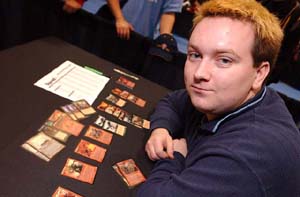 Eric: "There has never been a quote attributed to me in coverage that was actually something I said."

Eric won the roll and decided to keep his openers after a little consideration and played a Mountain. Jens also kept his first seven and followed suit with a Mountain but he had a first turn play and dropped a Goblin Sledder.

Eric played another Mountain—not a good sign for his Elf/Beast deck—and nothing else. Jens swung in for one on his turn and played a Festering Goblin.

A third mountain hit play on Eric's side of the table and he passed the turn with out even playing a Morph guy. After playing his own secret man, Jens attacked with his two Goblins and Eric fell to 17. During his EOT Eric cycled Slice and Dice to kill both Goblins and possibly the Morph guy if Jens didn't think to save it—which he did.

Forest continued to evade Eric and he didn't even have a fourth land but he put down a face down dude to match Jens'. Jens swung his guy and the two mystery men traded—Skittish Valesk for Jens and Towering Baloth for Eric.

Still no forest and not fourth land for Eric was making him grumpy and he grudgingly played another face down creature. Five straight land drops on the other side of the table equaled Menacing Ogre. Eric reread the card to make sure he understood the bidding mechanic correctly.

Both players made the secret bids and when they were revealed Eric bid 6 to Jens' 4 and he was down six life. Then Jens swung with the hasty 3/3 into a stunned Eric.

Eric: "This is stupid! It's not even fun anymore. You've taken all the fun."

The forest finally arrived on the next turn allowing Eric to Solar Blast the Ogre and swing for two with his morph-man. As Jens drew for his next turn Eric asked eagerly if he was done but the Swede had another man of mystery to play.

Now that Eric had access to green mana he tried to get something going and cycled Krosan Tusker during his main phase getting another Forest, which he played and used to cast Wellwisher. At the end of the turn, Jens flipped up a Thrashing Mudspawn. Cover of Darkness set to Beasts eliminated the muddy one's drawback and Eric plummeted to 4 life. Screeching Buzzard made and appearance and the turn was sent back to Eric who was trying to hold on with his fingernails.

Another Forest allowed Eric to play Symbiotic Elf and Elvish Warrior. When six points of evasion was coming over the Wellwisher was able to leave Eric relying on a single fingernail at one life. Jens couldn't miss from there with his Erratic Explosion and it was on to Game 2.

Eric: "I had a good draw... I've lost all my spirit. Did you have fun that game? If I had played a Forest before turn nine I would have had fun!"

Jens: "You kept a no Forest hand?"

Jens followed Eric's Forest with Mountain and Goblin Taskmaster. Eric was able to drop a turn tow Elvish Warrior and Jens could only play a land and say, "Go."

Eric: "If you ask me if I kept a no-Mountain hand I'm gonna get mad!" 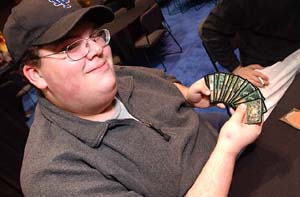 Jens swung in with Taskmaster but did not pump it and played a face down guy. Eric Tuskered for his Mountain EOT. All it did was make a 2/2 Heedless one that went to 1/1 on Jens's next turn when he Swatted the elf warrior and swung in for three.

Eric played a fifth land and tapped it all to play a morph and a Wellwisher—bringing the Heedless one back to the gray ogre power level. What followed is not for the squeamish and those with heart conditions may want to step outside for a few moments. Jens enchanted the Heedless One with Crown of Suspicions and sacrificed it giving all elves +2/-1 and killing the Wellwisher. The Heedless One promptly became a 1/1 and expired as well.

"What are you doing to me? I may have a response..." deadpanned Eric. But Jens was not done and he attacked with his Morph and his Taskmaster into Eric's morph but Eric did not want to make the trade. Of course, Jens flipped up the Skirk Commando and cleared Eric's board.

Eric: "Luckiest man on the face of the earth times ten!"

Eric cycled Lay Waste and announced: "Best split I ever made!" He played another face down guy, which traded with the Skirk on the next turn and then Jens whipped out another fat, red rare—Tephraderm.

Eric's deck only offered him an ironic Taunting Elf over the mercifully brief next two turns and Jens showed him the Starstorm and the Butcher Orgg in his hand when it was all over.