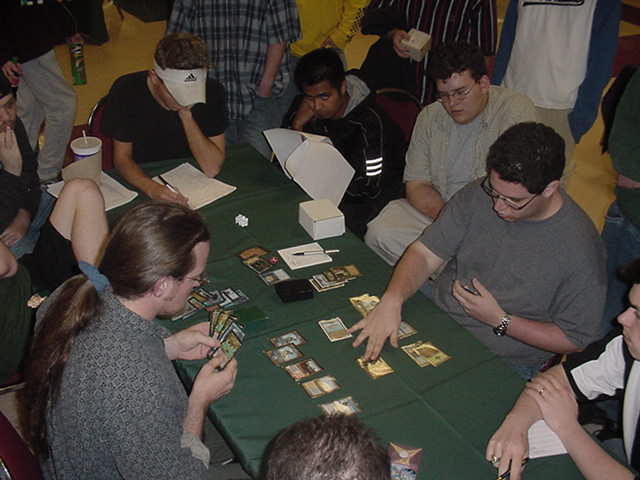 With only four players left standing in GP Milwakee, a battle of titans was about to begin. The match pitted the always-friendly Team CMU Captain Mike Turian against the man most commonly known as edt. Turian came wielding a deck based around Opposition and Squirrels Nest with a touch of red for Fire/Ice and Flametongue Kavu which he calls "Schlomo's Pickup Truck", while Eric Taylor was piloting the more traditional Goblin Trenches control deck.

The match began with some banter between the two about how amazing Turian's Dragonshield sleeves were, with edt giving his personal seal of approval on them. After the short chat, the players shuffled up for what certainly promised to be an interesting match if a little in Taylor's favor.

Taylor won the die roll and proceeded to mulligan before going first. He played an Island before passing the turn and Turian used his first turn to play out a Birds of Paradise. Taylor again played land go, and lapsed Turian's attempt at a Wild Mongrel on his turn. Turian played a Llanowar Elf, further expending his mana capabilities. But this was short lived as Eric untapped and fired the Bird and Elf leaving Mike with just two lands for permanents. Turian drew and played another Mongrel which resolved and then attacked after Taylor passed another uneventful turn. Eric iced one of Turian's lands on his end step and again passed his turn. Turian untapped and attacked with the mongrel taking edt to 15 and then resolved a Call of the Herd. However, this gave Taylor a chance to resolve the potentially game-breaking Fact or Fiction on Mike's end step. The piles presented were Memory Lapse, Island, Skycloud Expanse or Absorb and Repulse which Taylor took. Taylor untapped and continued to proceed in the usual control deck manner by passing the turn. Mike then attacked with the mongrel and elephant taking edt to 10 before attempting to cast Deep Analysis which was Absorbed by Taylor, taking him back to 13. On Turian's next turn, he flashed back Deep Analysis taking himself to 16 and then attacked with both of his creatures only to have his Call token repulsed and the mongrel took edt back to 10. 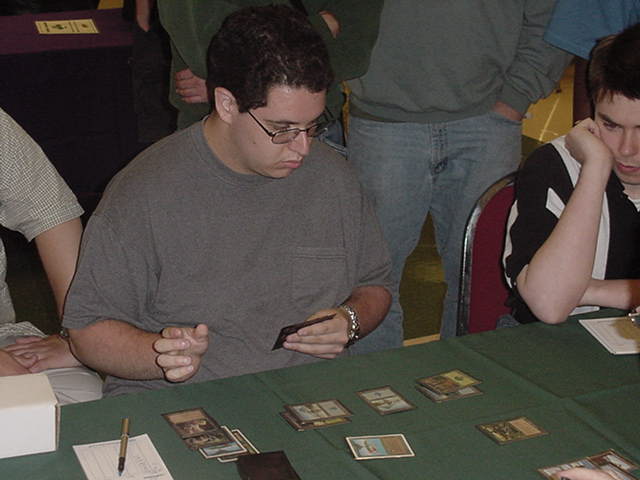 After his attack, Mike attempted to cast a Squirrel's Nest but it was met with a timely Counterspell. During the past two turns, Taylor had missed land drops, and he continued this on his next turn finding nothing to do. The mongrel swung again and took him to 8. Turian tried for an Opposition, but it was met with another Absorb taking Taylor back to 11. Another uneventful turn for edt let to yet another charge by Turian's Wild Mongrel taking edt back to 9. Turian attempted to flashback the call, but it was thwarted with a Memory Lapse. On Mike's next turn, the board consisted of only his Wild Mongrel against Taylor's seven lands. The Mongrel smashed again taking Taylor to 7 before Turian attempted a Merfolk Looter which was again Absorbed taking Taylor back to 10. Turian then cast a Flametongue Kavu crushing his own Birds of Paradise before passing the turn. Edt untapped and busted out his bomb: Goblin Trenches. The mongrel and FTK went in, with the FTK being taken down by two Goblin Tokens and the mongrel taking Taylor to 8.

Taylor did nothing on his turn while Mike topdecked Deep Analysis which was Absorbed yet again, but the Absorb was met with a Circular Logic this time, preventing Taylor's constant lifeswing to offset the mongrel's constant attacks. Turian then attempted to flashback Deep Analysis before attacking and Eric responded by Repulsing the mongrel since Turian was tapped out. Turian went to 13 from the Analysis. The next few turns consisted of Turians attempts to keep the board from getting out of control through the casting of Opposition, another Mongrel, and Birds of Paradise, in a futile attempt to stop the Goblin Token assault. The tokens soon overwhelmed Turian who seemed to have drawn quite a bit of land off of his Deep Analysis.

Turian- IN: 3 Gainsay 2 Static Orb
OUT: 3 Llanowar Elf 2 Call of the Herd
Taylor- IN: Everything but Meddling Mages!
OUT: Prophetic Bolts, Wrath of God, Repulse, etc

Turian went first after neither played mulliganned for game two. This game was a sight for sore eyes when compared to the back and forth motion of the first game. Turian led with a Merfolk Looter while Taylor played out an Island and Skycloud Expanse. Turian looted away a deep anaylsis before flashing it back with his two islands and still failing to find a third land. He discarded Flametongue Kavu and passed the turn. This would have been a good ramping point to Absorb mana on his turn, but Taylor was not that fortunate, and after shaking his head for a few minutes, he too discarded without playing a land.

Edt iced one of Turian's Islands in his upkeep in another effort to find land, but it was for naught. Turian continued to expand his board over the next turns, while all edt could do was merely draw and discard. Turian was making matters worse by icing Taylor's Island two turns in a row leaving him with only skycloud expanse untapped. Soon enough, Turian resolved an Opposition, and the press was on. Taylor attemped an Aura Blast in his upkeep when Mike tried to tap down his lands, but it was Circular Logiced via Merfolk Looter. On his turn, Turian played the final piece of the puzzle: Static Orb. Edt made one final upkeep attempt to break out with his other Aura Blast, but it was again thwarted by a Merfolk Looter powered Circular Logic. After this, Taylor scooped and they proceeded to game 3.

Neither player altered their deck for the final game. 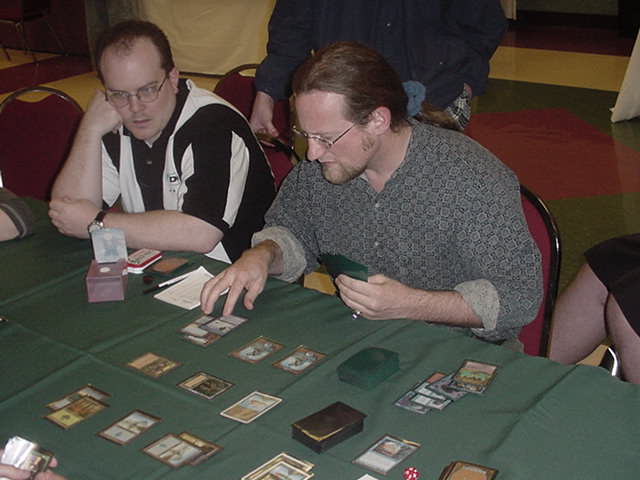 Game 3 began with talk of how edt "Almost Won" the last game due to Turian's painlands and Deep Analysis taking him all the way down to 11. Soon, however, both players kept their hands and edt kicked off with two lands. Turian attempted a Wild Mongrel on his second turn only to see it Syncopated for one. Taylor passed an uneventful turn and Turian again tried for a Wild Mongrel which resolved this time. Edt missed his land drop on turn 4 and the mongrel swung taking him to 18. Taylor managed to find a Battlefield Forge on his turn though and after being attacked again by the mongrel and letting Turian resolve a Bird of Paradise, he cast a Fact or Fiction on Turian's end step. The piles presented were Fact or Fiction, Goblin Trenches or Island, Mountain, Fire/Ice. Taylor gladly scooped up the two lands and Fire/Ice and tapped low to cast a Lightning Angel and swing on his turn.

The fearless Mongrel attacked again, however, taking the score to Turian 17, Taylor 14. Turian then resolved a breaker in Opposition taking a pain to 16. The game looked to be swinging in Turian's favor with Opposition and two creatures on his side and Taylor only having a Lightning Angel. Then it happened. Eric Taylor ripped the Aura Blast right off the top like the pro he is. The Angel attacked Mike to 13 and the Opposition headed off to the graveyard. Turian attacked and attempted a Squirrel's Nest that was immediately Counterspelled. The Angel swung taking Turian to 10 and a Flametongue entered play on Taylor's side destroying the mongrel.

Turian untapped and played another mongrel, which blocked the FTK on Taylor's next attack. Turian passed his next turn without casting a spell when Taylor attempted another Fact or Fiction, which was Gainsayed by Turian but his Bird and he got fired for one in response taking him down to 6. This meant he only had one draw step left since the Angel attacked him to three. He drew yet another land on his turn, and the very manaflooded Mike Turian extended the hand.