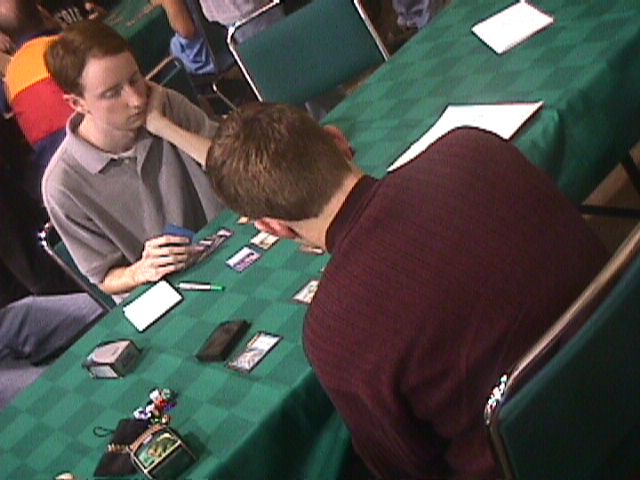 Eugene Harvey vs. Brad SwanIn case you haven't heard by now, Eugene Harvey drafted six Mystic Zealots. He's only starting five, but the sixth one gets sided in in every match. The rest of his deck is good, too.

Before the match, Swan commented on the "fix" that allowed Eugene and Andrew Johnson to be seated next to one another in the final draft, leading to both of them having good decks. Brad said he'd experience similar draft situations with his father, and he knows what a benefit it is to be seated near someone that will never, ever hurt your draft.

I guess that's how you get six Mystic Zealots. Let's game.

Swan got off to a bad start, missing his third land drop. Eugene played a Zealot.

"I bet there's more where that came from," said Swan, playing his third land and making Patchwork Gnomes. 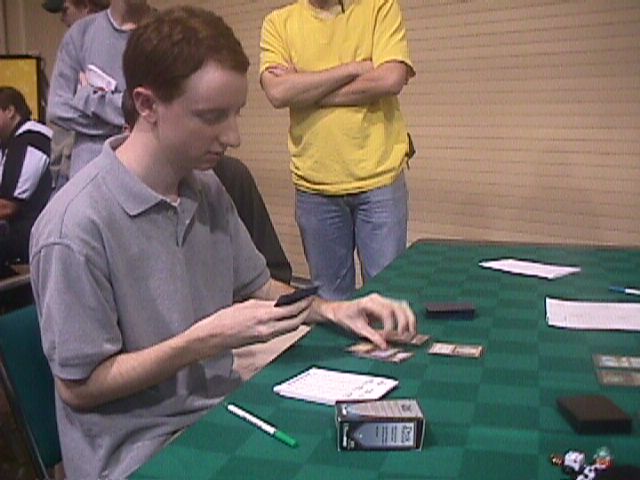 Eugene HarveySwan managed to get a few 2/2's into play, but it basically all boiled down to one thing:

Three Zealots, combined with two Aven Windreaders, overwhelmed Swan as he suffered through his mana-light draw.

Things didn't go well for Brad in game two, either, as he had to mulligan to five and his first play was Unifying Theory. (You'll probably want to click on that card name, folks; no one here knew what it did, either.)

After the card was passed around so the various judges and spectators could read it, Tom Swan (Brad's dad) said, "That's not the one we wanted to see."

Brad asked Eugene to not Disenchant it, because "it's fun."

Eugene was stuck at three land and had to "cycle" a Shelter on his Angelic Wall. Brad then showed the awesome power of the Theory by casting Peek and drawing an extra card!

Swan's Cephalid Looter was trumped by Harvey's Psionic Gift, and both players were drawing extra cards from the Theory all the way. 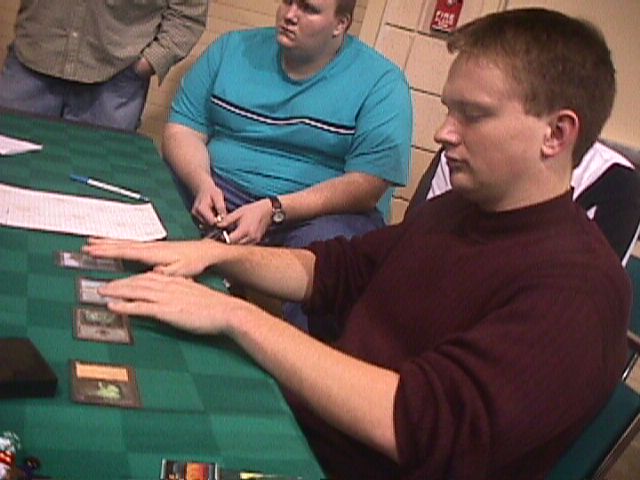 Brad SwanEugene played a Zealot. Did I mention that? He was up to three and taking nice-sized chunks from Brad's hide with them.

At this point the game became a blur of sideways Zealots and chump-blocking. It got interesting at one point when Swan cast Tainted Pact (his deck was full of surprises). Brad flipped up an Egg, a sac-land, an island, and then a Dreamwinder. Long pause. Nah, flip, Ghastly Demise. Long pause again. Brad takes the Demise and kills a Zealot.

Brad cast a couple of meaningless spells in an attempt to find something with Unifying Theory, but it wasn't to be.

Eugene and his Zealots 2 - Brad Swan 0

Eugene will meet his teammate Andrew Johnson in an all-CMU Finals.