no surprise two Japanese teams found their way to the Sunday stage at Pro Tour-Charleston. Despite a brief hiccup of Pro Tour-Honolulu, the nation has proved its place at the top of the Magic hierarchy over the last two years.

This semifinal featured two-thirds of Pro Tour-Atlanta semifinalist One Spin, now dubbed Kajiharu80. Tomohiro Kaji and Tomoharu Saito were here, and in place of player of the year Kenji Tsumura was Shota Yasooka, a hot name among those in the know about the Japanese players. They faced D-25, with Ryuichi Arita, Chikara Nakajima, and Kazuya Mitamura. Arita's a Sunday veteran, but his teammates were making their first appearance on this stage.

The Kaji-Nakajima matchup was interesting due to the selection of creatures in each players' deck. Kaji's Moroiis and Nakajima's Helldozers and Rakdos Pit Dragons were little seen all weekend, yet here they are on Sunday bashing away. Kaji has a Blue-black-green aggro-control deck, and Nakajima's is a black-red-green land destruction deck. 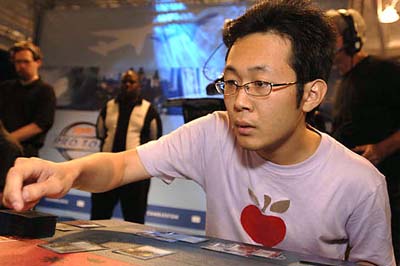 Tomohiro Kaji is in his second Team Sunday in a row.

Nakajima won the die roll - fortuitous, as it was the most important factor in the match according to his playtesting last night. Hit from Nakajima took out a Signet, and then Kaji played Clutch of the Undercity on a second Signet - making himself lose 3 life - when a second Hit was played. This match was clearly about mana.

When Kaji did nothing on his next turn, Nakajima tapped out for Helldozer and prayed that Kaji's hand was missing either the sixth mana source or the Twisted Justice that would turn the 'Dozer into a Braingeyser.

Kaji's next land was a Golgari Rot Farm, so any Twisted Justice action would have to wait a turn. All he could play was Signet and Moroii. Nakajima could destroy a Karoo and attack, but that wouldn't stop Justice on the next turn. Instead he just attacked for six and made another 'Dozer.

Kaji was at 8 with Moroii dinging him and he needed defense, so he summoned a Skeletal Vampire. Perhaps he didn't have the Justice after all.

At that point the 'Dozers went to work, destroying non-basic lands and then untapping to attack. Kaji eventually ran out of black mana to make bats, and the 6/5 Zombie Giants ran him over. Kaji was left wondering where his Putrefies were.

Over in the B seat, both Shota Yasooka and Ryuichi Arita were playing Grand Arbiter Augustin IV control decks, but while Ryuichi's was built to crush aggro, Shota's deck was set up to beat the control mirror. Those differences became evident when Ryuichi was forced to play his very cool textless Lightning Helixes on Shota's Court Hussars. Shota was able to save his removal spell, Mortify, for Ryuichi's four Niv-Mizzets. 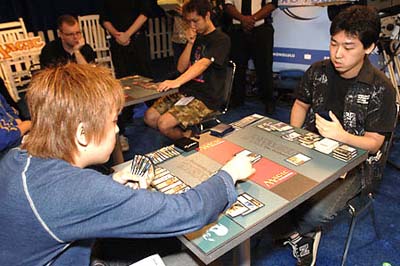 Arita and Yasooka manned the B seats for their respective teams.

Neither player did much of anything for the opening turns, playing only the occasional Signet, Electrolyze or Compulsive Research. In fact, thanks to the Karoos, neither player missed a land drop for the first thirteen turns.

Both players' Convolutes were rather poor by the late game, however Ryuichi managed to bluff Shota into not paying the mana for a second Convolute. Shota was scared of tapping too low, not knowing that Ryuichi was only holding an uncastable Razia's Purification. Unfortunately, his lack of counterspells caught up with Ryuichi, as Shota resolved a Debtors' Knell, the most dangerous card in Shota's deck. Ryuichi could only watch helplessly as Shota stole his dead Niv-Mizzet. Niv-Mizzet's abilities allowed Shota to negate Ryuichi's last threat, the Windreaver. A couple of draw steps, Niv-Mizzet taps, and Compulsive Researches later, Shota was up the first game.

Over at table C, both players kept their opening hands, with Kazuya Mitamura winning the die roll and choosing to play first. Tomoharu Saito cast a second-turn Boros Signet with Mitamura going exactly as he had hoped by laying a third-turn Carven Caryatid. When Saito passed his third turn with no play, things began to seem very confusing. Wasn't Saito's deck the aggressive one? Castigate from Mitamura revealed what was really going on, with Saito dropping two lands, two Hit/Run, Lightning Helix and Lyzolda onto the table. Mitamura took one Hit/Run, but the other made the defender disappear.

Rolling Spoil from Mitamura killed Lyzolda and Saito's Godless Shrine, but Saito finally got into the attacking business a turn later, pushing a Skyknight Legionnaire directly into the red zone. Mitamura had the foil for that as well, casting Skeletal Vampire, who brought his two batty friends to the party.

Lightning Helix from Saito forced Mitamura to sacrifice a bat to save it, tapping it in the process from the regeneration. Another bat blocked the Legionnaire, which let Saito Hit the batman out of the way. Mitamura cast a Castigate on his turn, stealing Saito's Demonfire before playing Loxodon Hierarch to bring his life total back up to 11. Saito's attack dropped him to nine on the next turn, but Congregation at dawn kicked off an official pachyderm parade, giving Mitamura access to two more Hierarchs and a Skeletal Vampire.

Saito fought the good fight from there, trading cards like Lyzolda and his Legionnaire for damage and to stay alive, and things even looked mildly hopeful when he cast Rakdos Guildmage with a ton of mana open, but Mitamura cast his fourth Hierarch of the game at that point, sealing away game 1 for his team. 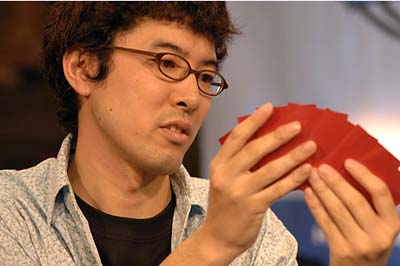 Kaji, going first, played Rolling Spoil on turn three. Up in mana, he was able to Voidslime a Rumbling Slum, then played a Moroii. Nakajima resolved a second Slum, but Kaji had a second Moroii.

Because Nakajima had to play so many dual lands untapped in the match, the Moroiis were able to outrace the Slum, and Kaji pulled the match to 1-1.

In the B match, both players mulliganed, then both players resolved Compulsive Research to restore their hands. Aside from dueling Compulsive Research and Court Hussar, neither player cast much until turn 8. At that point, Shota cast an end-step Moonlight Bargain. Ryuichi attempted to cast Odds, which was Spell Snared by Shota, which in turn got Remanded by Ryuichi.

The Odds resolved and the coin flip revealed Moonlight Bargain would be copied by Ryuichi. Ryuichi paid 8 life for four cards and Shota paid a mere 6 life for three. As this volley happened at the end Ryuichi's turn, Shota was free to play whatever cards he wished. He chose an Angel of Despair, killing one of Ryuichi's lands and strongly threatening his diminished life total. Ryuichi fought on bravely, but his hand of counterspells was no match for Shota's 5/5 flier. Ryuichi's last ditch couldn't resolve and Ryuichi conceded the match.

Saito had to mulligan on the play and again had the start of land, land, Boros Signet, bringing all of his colors online. Castigate from Mitamura on turn two revealed Giant Solifuge, Dark Confidant, and Char, removing the overly large insect from the game. Dark Confidant on the next turn put Saito in position to recover from his mulligan, delivering Skyknight Legionnaire from the top of his deck a turn later, but Rolling Spoil made sure the invitationalist quickly went away. Saito's other draws were pretty stellar, giving him another Solifuge to bash Mitamura. Loxodon Hierarch provided a four-point boost for Mitamura, and then absorbed a Char as well, but Saito's attack dropped Mitamura to four again. A second elephant brought him back to 8, Lightning Helix made that 5, the attack made it 3, while Lyzolda was able to sacrifice Solifuge with damage on the stack, making it 1, and Mitamura's concession made it 1-1.

For the final game, Nakajima kept his hand after some deliberation with teammates … it had great cards but no Signet, the key to getting off to a blazing start. Kaji, on the other hand, had to mulligan to five.

Kaji cycled Determined on turns two and three, which surprised Nakajima, as he didn't expect Kaji to bring in that card. Nakajima, on the other hand, had business.

He played back-to-back LD spells on turns four and five, clearing the path for a turn six Helldozer. Kaji, with only two mana in play, rapped vigorously on his deck, and it loved him back, coughing up the black land he needed to Putrefy the 'Dozer.

A second 'Dozer met a similar fate a turn later, and a Rakdos Pit Dragon died to Last Gasp. Nakajima had more gas in the tank, though, and brought out a Rumbling Slum, then Hit Kaji's Caryatid out of the way. One attack from the Slum was enough for Nakajima, who then ended the game with a sizeable Demonfire.

In the C Seat, game 3 was Mitamura's turn to mulligan, with Saito casting Dark Confidant on turn two. Mitamura cast professional damage shield Carven Caryatid on turn three, but the Hit man immediately sent it to the bin, letting Bob get in the red zone and bash for 2. Last Gasp got him before he could bash again. Saito kept the pressure on with a Legionnaire, while Castigate from Mitamura revealed Demonfire, Rakdos Guildmage, Lightning Helix and a Sacred Foundry. Which one would you take? 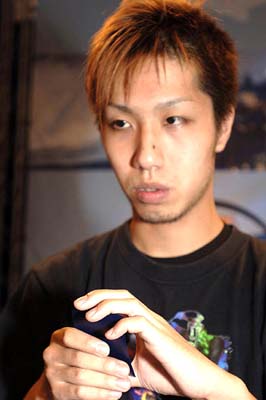 Burnmaster Saito had plenty of gas to finish off Mitamura.

Mitamura picked Demonfire, laid a land and passed the turn, letting Saito cast Rakdos Guildmage, create a goblin, and attack for four, dropping Mitamura to 9. Skeletal Vampire provided Mitamura with a spicy set of blockers, but Lightning Helix kept the bat man down for at least a turn, depending on what Mitamura decided he wanted to do. Should he sacrifice a bat to save the Vampire and lose two-thirds of his blockers this turn or should he just let the big guy die?

A bat secret service agent gave his life for his leader, letting Saito send in the bear force via air and land, dropping Mitamura to 5. Loxodon Hierarch made that nine, while Putrefy took down the most dangerous man on the board, killing the Rakdos Guildmage. Just as Mitamura began to feel he might be safe, Saito cast an end-of-turn Char followed by Demonfire to finish him off, while revealing a second Demonfire still in his hand.