Things didn't start well for Massaro, he had to take a mulligan. Felipe came out with Olle Rade and Werebear. He tried to keep Luis back with Temporal Springs but it turned against him: Massaro used Memory Lapse. 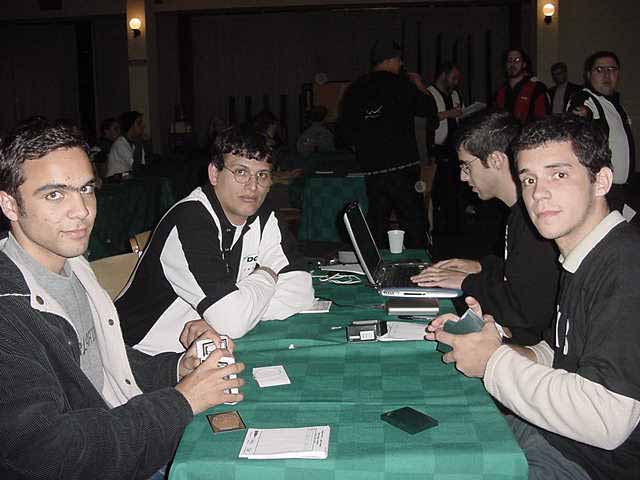 Massaro and Desirati in the semifinals.On the next turn Luis Massaro reached four mana and that equals Wrath of God. Since he tapped out to clean the table that gave Desiderati the chance to play Quiet Speculation for two Deep Analysis and one Roar without fear of counter.

He flashbacked one of the Analysis and played Wild Mongrel. Massaro used Fact or Fiction to get help.

Massaro took the first pile. Desiderati attacked him down to fifteen and played a second Mongrel, which got immediately Repulsed. The next time Desiderati tried to play it Luis had Counterspell. In need of extra fuel he tried the second flashbacked Analysis. Again Luis had the answer: Memory Lapse.

Sensing he had control of the game Luis Massaro dropped the bomb: Goblin Trenches. Desiderati tried the Temporal Spring again, but Massaro had another Counterspell.

Still Felipe wouldn't back down: he flashbacked the Roar and this time Massaro allowed it. To get past the Trenches Felipe Desiderati had a plan: he discarded Wonder to the Mongrel and brought his opponent down to nine.

The extremely calm Luis Massaro didn't flinch from that. He made two Goblin tokens and Repulsed the Wurm that could kill him on the next turn. The Goblin tokens brought Felipe to nine as well.

In went the Mongrel dropping Massaro to six, with the help of a discarded Roar. When Desiderati tried to flashback the Roar Luis Massaro, once again, had the counter for it.

Two more token showed up and brought Desiderati to five. On his final try, Felipe sent the Mongrel in and discarded his hand. For a change, Luis Massaro had no answer. He could only smile in his very quiet way and shrug while scooping.

Flametongue Kavu tried to kill the Mongrel but Desiderati threw away three cards to keep it. Amongst those was the stairway to heaven: Wonder. A second Mongrel showed but and a second Flametongue took it out.

The remaining Mongrel traded with one Kavu but the damage was done. At three life - the Mage had been a busy boy - Desiderati conceded.

Felipe: "There is a saying: there is no life after Flametongue. Or Overrun."

Wild Mongrel came out on turn two and again Massaro used his second turn to lock out Deep Analysis with Pikula. Desiderati's following Careful Study threw one Analysis and one Roar into the graveyard before he played a second Mongrel.

Wonder hit the graveyard and the Hound duo brought Luis to twelve. Massaro tried to Repulse one of them but Felipe had Gainsay to keep the tempo. The best Massaro could do was play a second Mage, naming Roar, signalling he was in deep trouble (ie. He didn't have Wrath or the second White mana to cast it).

He reached four mana and failed to play Flametongue Kavu. Felipe went for the throat and discarded three lands to pump his Mongrels for lethal damage. Massaro might have been in trouble but he wasn't dead yet: he Repulsed one of them.

Still, he went down to three and the second Mongrel returned. The Mages attacked dropping Felipe Desiderati to twelve. On the following turn Felipe tried to play Olled Rade and Massaro answered with Repulse on Mongrel.

That was not enough. Olle resolved, the remaining Wild Mongrel attacked the bounced Hound was discarded to deal the final point of damage.