his year's World Championship final day began with an incredible exercise in how one of the most difficult matchups in Magic plays out by two of the best players in the world. On one side, Shahar Shenhar, the youngest player in the World Championship, sat looking to redeem himself after his Israeli national team just narrowly missed out on the Top 8 of the World Magic Cup, losing to eventual champions France in the final round of pool play. On the other side of the table sat Ben Stark, inducted to the Magic Pro Tour Hall of Fame just days ago.

Control matchups, like this UWR Flash mirror, are some of the most misunderstood matches in Magic. Much of the match is spent jockeying for position, but it isn't along the same axis that most other decks use. It isn't creatures in play that matter; it's cards in hand and mana untapped that decide the eventual winner. Deciding when and how to cast a spell or activate a land can spell the difference between a win and a loss, and both of these players know that very well. 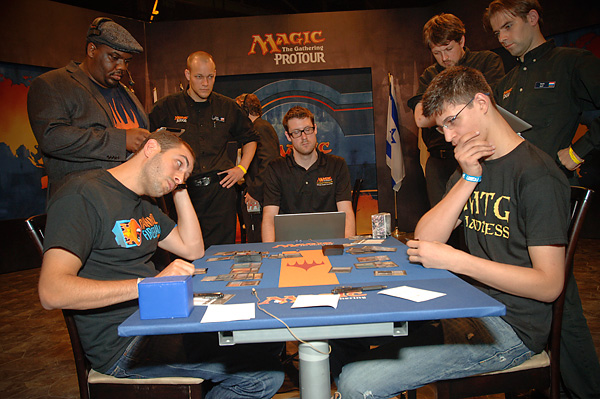 Shahar Shenhar and Ben Stark go toe-to-toe, with each teammate taking on a different role with their specific versions of Blue-White-Red Flash.

The first game opened in a very traditional manner. Turn after turn flew by, each player building their mana base up, the most crucial resource in a control mirror. By the end of turn nine, neither player had missed a land drop, nor had they added anything to board besides those lands.

During his tenth turn, after missing his first land drop, Shenhar was forced to begin to use his mana. Lightning Helix was the first of many burn spells to be launched in this match, searing Stark's face for three points of damage. This began a string of spells flying back and forth, with each player trying to commit the smallest amount of mana possible to their own turns, while trying to avoid discarding a spell rather than cast it as well.

This slow flurry eventually led to the defining turn of the game. Stark had used his Tectonic Edges to keep Shenhar's Celestial Colonnades off the table, knowing that there were precious few ways to kill it in each deck. Shenhar, meanwhile, let Stark keep his, preferring to wait for a turn when Stark activated it. This was a crucial distinction. While Stark's play shrunk Shenhar's options for play for multiple turns (having less mana means less options), Shenhar can potentially force a turn where he has all of his mana and Stark has none of his.

The levee broke when Stark finally decided to begin activating his Colonnades to attack. He fired the first one up, allowing Shenhar to kill it with his Tectonic Edge, but not before Stark had tapped it for mana. Using this, he tapped four other lands to fire up his second Colonnade. Shenhar had six cards in hand, but no second Tectonic Edge in play. He went ahead and cast Path the Exile, getting rid of Stark's only offense. At the end of Shenhar's turn, Stark sacrificed a Scalding Tarn, dropping himself to 9 life. 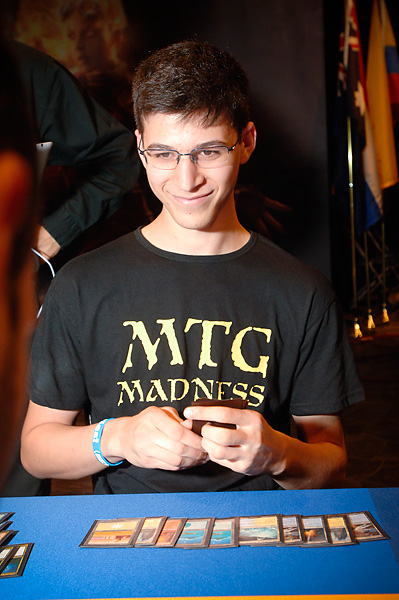 Shenhar sits patiently, waiting for the right moment to strike with his hand of Lightning Bolts.

It was here that Shenhar struck. Stark only had two other untapped lands after activating his Colonnade, and his activation was still on the stack. Shenhar aimed a trio of Lightning Bolts at Stark, representing lethal damage. With the last one on the stack, Stark aimed a Lightning Helix at Shenhar, looking to stay alive, but Shenhar plucked a fourth Bolt from the two remaining cards in his hand.

"Oh geez, the fourth," Stark asked with surprise. "I figured on three, but the fourth was big. My hand was so good. If I get to untap there, I can't lose."

Instead, he found himself sitting down one game in this incredibly important match. It is worth noting that Shenhar won this match despite both being the first player to miss a land drop, as well as the first to begin playing spells on their own turn. Things had to work out exactly right for him to take the match, and Stark continued to second guess his decision to crack the Tarn until the end of the match.

The second game continued to illustrate how important mana was to this match, and how much each player was trying to game to maintain their edge in the department. Shenhar began this with an opportunity on the draw to play a Tectonic Edge and sacrifice it immediately to kill Stark's copy, denying him the chance to use it at a later point in the game. Stark tried to put himself even further ahead by using a Cryptic Command to bounce Shenhar's Celestial Colonnade, but Shenhar had the Mana Leak to avoid falling two lands behind in the race.

At this point, both players were cycling through their Electrolyzes during each other's end steps, trying to endure their ability to continue making land drops. This mana race came to about a dozen turns into the game, when Stark, who had missed a couple of land drops, made a move that would set the remainder of the game's action into motion. Shenhar had tapped down to two lands to Snapcaster Mage back an Electrolyze, prompting Stark to play a Baneslayer Angel. With the temporary mana advantage, Stark easily won the permission war to allow it into play. 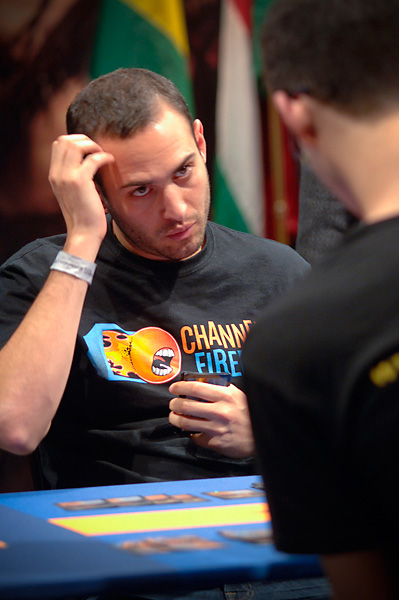 Stark settles into the control role, his deck better positioned to have the answers rather than the threats in this matchup.

The next turns saw Shenhar return it via Cryptic Command, as well as attempt to force through a Restoration Angel and Thundermaw Hellkite, the latter of which worried Stark. He was down to 7 life, so replaying his Baneslayer would result in lethal damage. Stark asked for the text of Thundermaw, something Shenhar also asked to see. Stark saw right through the obvious bluff, going so far as to tell Shenhar that he knew he had it in his hand. Sure enough, the Hellkite hit play. Stark was mostly tapped out from begin forced to cast a Cryptic Command to counter an end of turn Restoration Angel. All Stark could do was try to kill the Thundermaw with a Path to Exile, but Shenhar had the perfect Counterflux to take the second game.

Game 3 was a bit more aggressive from Shenhar, as he managed relatively early copies of Vendilion Clique, knocking Electrolyze and Counterflux from Stark's hand. The first died to a second Electrolyze, but the second not only stayed on the table, but dealt a hefty amount of damage to Stark. It looked like Shenhar was well on his way to a clean sweep of the semifinals. Down to 7, Stark managed to maneuver his way to a successful Cryptic Command, returning the Clique and drawing a card. Shenhar tried to save it with a Restoration Angel, but Stark had the mana advantage and won the ensuing counter war. When Shenhar tried to recast it during the following end step, Stark had a second Cryptic Command to stop it. Shenhar was out of gas.

Into that void, Stark stuck the devastating Teferi, Mage of Zhalfir. Shenhar had to respond by casting Sphinx's Revelation for four, trying desperately to draw into something to help him. He found a removal spell, Path to Exile, but he had to wait until his turn to cast it.

When he finally did, Stark used Cryptic Command to stop it. 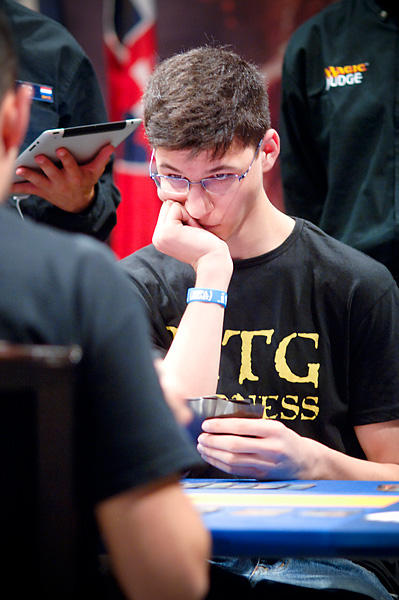 Shahar is backed up against a wall, locked under a devastating Teferi, Mage of Zhalfir.

A Thundermaw Hellkite to follow met a similar fate, as a Snapcaster Mage flashed back the Command, returning the Snapcaster to Stark's hand for a later use. Play continued just like that for a few turns until Stark could finally use the Snapcaster to flash back an Electolyze for lethal damage, taking his first game of the match.

"The fact that we've played three games and we each feel like we punted the games we lost show how good this Magic is," Stark said as he and Shenhar were discussing potential misplays after that game. "I'm pretty sure our lines were right, but the fact that we can even consider it is great."

And despite three great games of Magic, perfect illustrations of playing the intricate control mirror, things ended on a very sour note. Stark drew his hand for the fourth game and immediately shipped it back for a fresh six. When he drew those, he sighed heavily and shook his head before fishing back for a new five.

"Your lands are scared of you because you crush them into oblivion when you shuffle them," Shenhar joked about Stark's heavy-handed shuffling technique. Sad as he was about going to five, even that drew a smile from Stark. The smile stayed a little longer when he found himself able to Mana Leak a Molten Rain on the third turn, but it evaporated a turn later when another copy returned him to two lands, a total he would never exceed. Stuck on a Tectonic Edge and a Hallowed Fountain, Stark watched patiently as a Thundermaw Hellkite ended the game and the match. 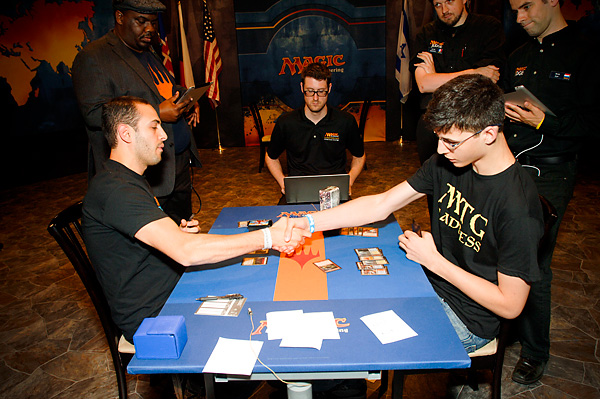 Shahar Molten Rains Stark out of the game and the match, moving on to the finals of the 2013 Magic World Championship.