Both David Sharfman and Fabian Thiele came into this round hot off of their underdoggish quarterfinal wins. Sharfman had absolutely dominated his match against Hall of Famer Tsuyoshi Fujita, while Fabian Thiele, who was the lone undefeated player after the first day of the Pro Tour, went to the final game, and almost the final opportunity, to defeat Gaudenis Vidugiris, who has catapulted himself into the midst of the Player of the Year race with his finish here and his win at Grand Prix Denver earlier this year.

Thiele won the die roll and deferred playing to Sharfman. Sharfman made a Flight Spellbomb to start the first game, a card that Thiele understands all too well. He had just come off of defeating Gaudenis Vidugiris on the back of the artifact. Sharfman followed that up with a Shrine of Loyal Legions. Thiele had the perfect answer to it in the form of a Gremlin Mine, which would prevent it from getting too nuts. When Sharfman tried to get offensive with a Porcelain Legionnaire, Thiele used a Grim Affliction to kill it, predictably choosing to proliferate nothing. He then untapped and added a Blind Zealot to his team. Sharfman made a Rusted Slasher on his turn, slowing Thiele a step. 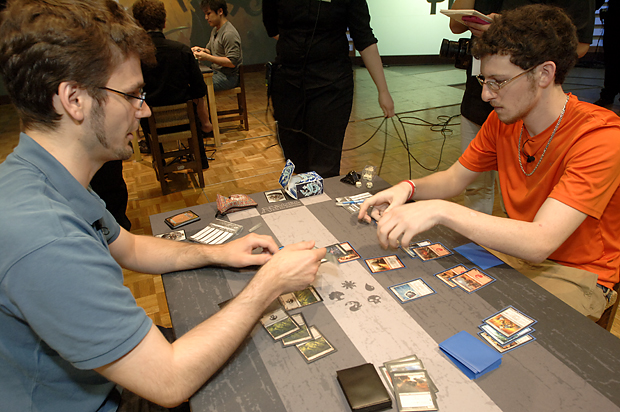 It's not quite all the marbles just yet, but Fabian Thiele and David Sharfman are playing for an awful lot of marbles.

At the end of Sharfman's turn, Thiele used his last remaining mana to set the Shrine back to zero counters from three with Gremlin Mine. Not wanting to lose his Zealot in a pointless fight, he simple added a second copy to his team and passed the turn with a Mountain up. Sharfman seized his advantage and played a Blade-Tribe Berserkers with metalcraft, pounding over with the 6/6 to knock Thiele to 14. Thiele, unable to attack or find a fifth land, simply played a Myr Sire and passed the turn. Sharfman thought for a moment before sending his now-3/3 Berserkers in to attack. Thiele declined to block and fell to 11. After combat, Sharfman spotted him a Myr token by using a Blisterstick Shaman to kill the Sire. Sharfman bolstered his ranks with a Vulshok Replica and passed the turn, still leaving one Mountain available.

Sharfman ticked his Shrine up to three before drawing his card. Before long, the Shrine would provide a lethal swarm of attackers. After some thought, he chose to use his Flight Spellbomb to take to the skies with his Berserkers, knocking Thiele to 8. Afterwards, on only four mana himself, Sharfman played a Spin Engine and passed the turn. Thiele drew his card, finally found his fifth mana, and played a Nested Ghoul, after giving Sharfman a moment to play a guessing game aloud about what he could possibly play.

At this point, Sharfman couldn't attack, but he sat content to let his Shrine of Loyal Legions continue to grow. When Thiele passed the turn right back, things looked to be strongly in the American's favor. The next turn brought Sharfman his fifth mana, but he chose not to use it. At the end of his turn Thiele used a second Grim Affliction to kill the Rusted Slasher.

Thing didn't look to good for young German, but his posturing at the beginning of his next turn made it look like he wanted to attack. After a bit of maneuvering, he eventually decided not to, instead adding a Kuldotha Ringleader to his team. At the end of Thiele's turn, Sharfman tapped five lands to make a Spire Monitor, enabling him to untap and continue his assault. Thiele dropped to 5. A Nihil Spellbomb allowed Thiele to cycle for an answer, but he didn't cast a spell afterwards. He attacked with his Ringleader, but not until he was reminded that he had to. At the end of his turn, Sharfman finally traded in his Shrine for six 1/1 Myr tokens, untapping and attacking for lethal damage to take the first game of this semifinal match.

Between games, Sharfman and Thiele debated about the use of the Gremlin Mine that early in the game. Thiele admitted that he had used it when he did because he thought it made 2/2s, and he thought that doing so had been a mistake. Sharfman didn't see it that way, and told Thiele that he didn't think it was that big of a deal in the general scheme of things. Ultimately, all he missed was a single counter, and Sharfman had attacked for more than that counter would have made up.

Thiele told Sharfman to play first for the second game. Sharfman's draw was a little slower than the last, having to wait until turn three for a Spin Engine as his first play. Meanwhile, Thiele made a Gremlin Mine and a Septic Rats over the first few turns. The Mine was not long for this world, as Sharfman ate it with an Oxxida Scrapmelter. 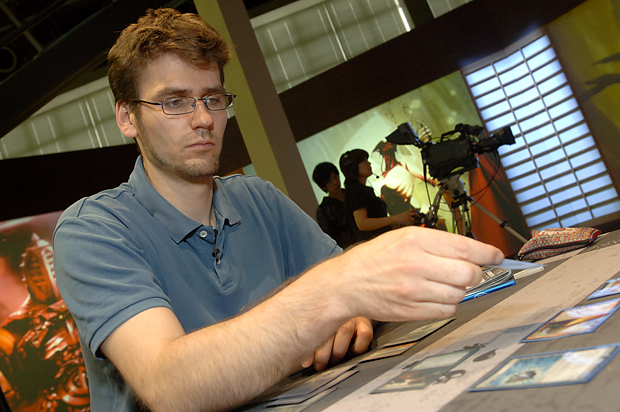 An Instill Infection stopped the Spin Engine during the next attack, but the Scrapmelter swung free. After Thiele's swing back, he played a Reaper of Sheoldred, his second infect creature of the game.

"I only have two infect creatures," Thiele admitted as he played the Reaper.

On Sharfman's turn, he used a Vapor Snag to send the Reaper back to Thiele's hand. This gave his Scrapmelter free rein to attack Thiele down to 13. He also played an Auriok Replica as a potential blocker. Thiele untapped and replayed his Reaper, attacking Sharfman up to five poison counters. Sharfman untapped and sent his Scrapmelter into Thiele. Thiele blocked with his Reaper, allowing Sharfman to clear his side of the board after combat with a Kuldotha Flamefiend, which hit both of Thiele's creatures for 2. Sharfman got his sixth poison counter for his efforts, but if Thiele was to be believed, it looked like the end of their flow.

On the next turn, Thiele began rebuilding his board, starting with a Blind Zealot. When Sharfman attacked with his Flamefiend, Thiele blocked with his Zealot, using a Grim Affliction to kill it and proliferate Sharfman and his Scrapmelter, killing the creature and bringing him up to eight poison. Thiele tried to get back into things with a Blade-Tribe Berserkers, but Sharfman had a Spire Monitor and a Blisterstick Shaman. Thiele made a Tumble Magnet to stop the Spire Monitor momentarily, but Sharfman used his Flight Spellbomb to cycle a card and lift his Shaman up. The attack knocked Thiele to 7. 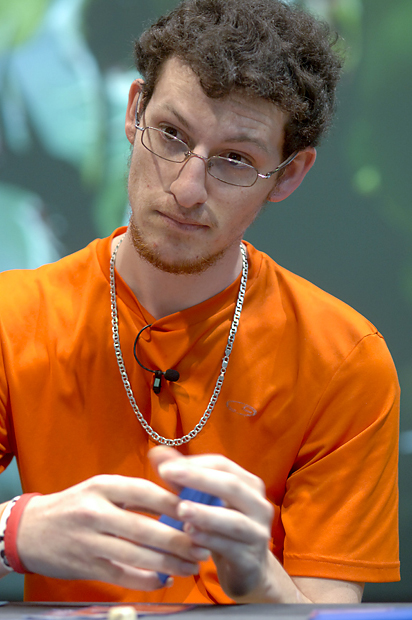 For the next couple of turns, Thiele was force to play defense, leaving his Berserkers home and stopping the Monitor with his Magnet. Eventually, in danger of losing his last counter on the Magnet , Thiele had to let one hit through, dropping himself to 4. Unable to find a proliferate card, he had to burn the last counter on the immediate next turn. After combat, Sharfman made a Shrine of Loyal Legions, which had won him the first game. This game, it never got the chance. An attack from the Monitor and a Vapor Snag did the last 4 points before the Shrine could get even its first counter.

Having seen a little more of Thiele's deck, Sharfman grabbed for his sideboard, prompting Thiele to comment on it.

"Going to your sideboard now that you have a little more information?" Thiele asked.

Once again, Thiele chose to draw, which Sharfman didn't seem to mind too much. This third game started with a slightly different pace from the previous two. Sharfman got on the board first with an Embersmith, which hit Thiele for 1 off of a Shrine of Loyal Legions. Thiele made a Sphere of the Suns on his second turn, but didn't have a four-drop to play. Instead, he used his mana to make a Nihil Spellbomb and a Myr Sire. Sharfman used a Vault Skirge to allow the Embersmith to kill the Sire before passing the turn. Thiele used his Spellbomb at end of turn to cycle for some better cards.

Thiele found a Blind Zealot, but as of yet in the match, not one of them had managed to hit Sharfman. Sharfman's Skirge attacked, knocking Thiele to 16. An Oxidda Scrapmelter came down, destroying Thiele's Sphere of the Suns before he could use the last couple of counters, and stranding him on four mana. The way was now clear for the Zealot, and it attacked past Sharfman's Embersmith and Scrapmelter to kill the Beast. 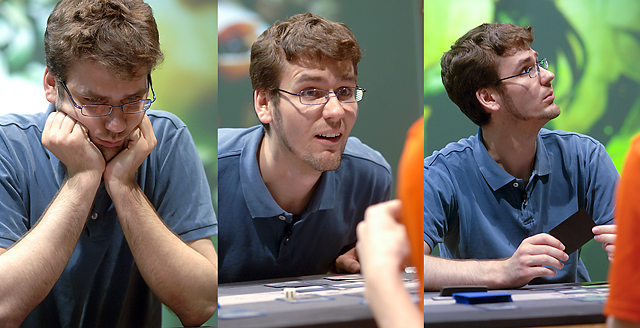 Neither player really had anything over the next couple of turns. Thiele made an Iron Myr and a Reaper of Sheoldred, while Sharfman simply sat behind his Shrine and Skirge. Before the Reaper could attack, Sharfman removed it with a Turn to Slag, allowing him to attack with his Embersmith. Thiele made a Nesting Ghoul to replace it, which looked like it would stop Sharfman—that is, until he played Kuldotha Flamefiend. It ate the Skirge and allowed Sharfman to wipe Thiele's board, though Thiele did get a shiny new Zombie from the Nesting Ghoul as a consolation. A Spread the Sickness killed the Flamefiend and put Sharfman up to two poison, but Sharfman still had his Embersmith and a Shrine with six counters. Sharfman shot Thiele with a Flight Spellbomb and then lifted his Embersmith to attack Thiele down to 9.

When Thiele played a Tangle Hulk and passed his turn, Sharfman thought hard before finally sacrificing his Shrine, netting six tokens. After untapping, he attacked in, clearing the way for his attackers by Shattering the Hulk and bouncing the Zombie token with a Vapor Snag, which let through the exact amount of damage Sharfman needed to kill Thiele.

David Sharfman defeats Fabian Thiele 3-0 and advances to the finals!