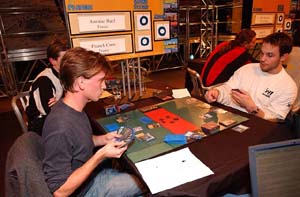 English was not the language of choice at this match, so don't expect many quotes from the players. I all can do is hope to follow the movements of the cards around the playmat, but that usually tells the story well enough.

Franck and Antoine are two of France's most accomplished players, coming into this event with over 30 Pro Tour points each, although they both admit that number is significantly less now that PT Chicago is over. Both are looking for redemption from bad draft events by winning the big money here in the Standard Masters.

Franck is playing a three-color Opposition deck that splashes black for discard. It is based on the Extended deck he played in Houston, except now the Intuitions are Quiet Speculations. Antoine is playing a typical Psychatog deck, now updated to include both fetchlands, cycling lands, and Smothers.

Franck had the first play, a turn-2 Llanowar Elves, but Antoine offed it with Smother. Franck thought for wayyyy too long before playing a third land and a Birds of Paradise on his turn, and it, too, was Smothered. Franck's turn-4 Deep Analysis was countered with Force Spike, but the flashed-back half resolved. Franck followed it up with a Call of the Herd.

Antoine did nothing about the token, did nothing on his own turn, and took the damage from its attack. He then Counterspelled Franck's Birds, untapped, and cast Upheaval to reset the game.

After the Upheaaval, Canu had to discard a Duress and three land. It was easy to see why Antoine was so adamant about keeping Franck's mana creatures off the table.

Franck drew a Polluted Delta on his next turn, got a swamp, and played Duress. Antoine's hand was revealed to be five land, Smother, and Upheaval; Franck made him discard the latter. Certainly not much business! Could Franck capitalize? 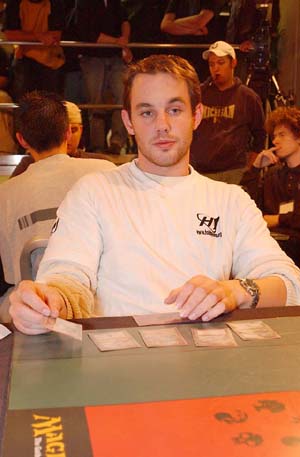 An Analysis from the graveyard found a Duress to get rid of the Smother, and then Franck played the bomb Squirrel Nest. Antoine made Franck's life difficult again by topdecking a Deep Analysis and immediately drawing four cards. Franck put out a Wild Mongrel and looked to end the game quickly.

Antoine drew no answer to the Mongrel, and when he realized Franck could pump it enough times to kill him, he conceded.

Olivier Ruel told me that after playtesting this match-up all day, there's no way of knowing how Franck will sideboard. He has so many reactive cards he can bring in, like Ray of Revelation (vs. Engineered Plague), Envelop, Static Orb, and more discard, that if he brings them all it his deck becomes too low on threats. I imagine Franck knows exactly what he wants to do, exactly which cards he wants to bring in, so the advantage has to go to Franck in this situation.

Antoine started Game 2 by mulliganing a zero-land draw, and kept the six.

Franck started with a Birds that was killed via Chainer's Edict, which hurt, because his first four lands were forests. He waited for a window, and got one when Antoine tapped out for Deep Analysis on turn 4. Franck played a Phantom Centaur—another sideboard card—and Antoine had no way to kill it. He simply played a fifth land and a Psychatog and said go. 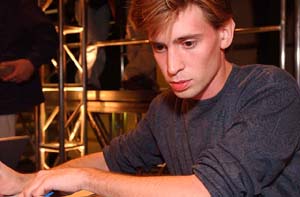 Now Franck had to see if he would win the race. He drew a Delta and used it to play Duress. Antoine had to use two Circular Logics to stop it, and then took a hit from the Centaur. All of Antoine's pain lands were catching up to him—after flashing back his Analysis, he was down to 8.

Smother from Franck took out the 'Tog, an attack took Antoine to 2, and Antoine was forced to Upheaval, tapping a Cephalid Coliseum. He was alive, although just barely.

After the reset, Franck's Cabal Therapy was Force Spiked, and his Elf was killed by Engineered Plague. Antoine held off the first Squirrel Nest token with a Psychatog, and if he had drawn a second Plague, he could have won the game. As it happened, the Nest overran him.

Game, set, and match to Franck Canu, who will now go on to face Ken Ho in the finals.