Semifinals: A Friendly Game Between Teammates

Scott-Vargas was called the best player in the Top 8 by (now) former U.S. National Champ Antonino De Rosa before he beat De Rosa in the quarterfinals. Now the man nicknamed "Fob" has to face his toughest challenge of the weekend, teammate Paul Cheon. Like Scott-Vargas, Cheon is also a California native, though unlike Scott, Paul lives in SoCal. The 21-year-old student is a member of Luis's Magic Online clan, and they even lived at each other's houses while preparing for Pro Tour-Charleston. Now they have to face a 59-card mirror match, with Cheon's deck missing a Kokusho because he couldn't find another one in real life, though his online account apparently would not have that problem. 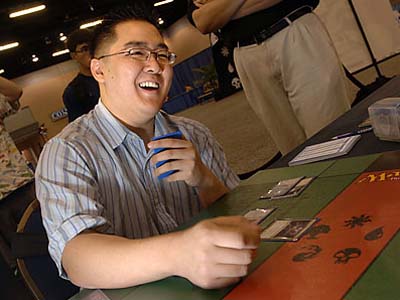 Signets and lands littered the board for the players during the early turns, with Cheon getting the early mana advantage and casting Angel of Despair first. Mortify a couple of turns later killed the Angel, but Zombify brought back the Angel. Wrath again got rid of the Angel, but Cheon simply made more. The play was lightning fast, but Cheon's early mana edge allowed him to Angel Scott-Vargas right out of the game.

Cheon freely admitted he was not sure how to sideboard for the mirror. Apparently they mostly practiced Luis's quarterfinal match against De Rosa's deck last night, deciding that Paul's match was fairly straightforward. He had to mulligan, and then lost another card (Kokusho, the Evening Star) to Castigate from Scott-Vargas. Luis tried to cast Meloku on turn five, but met a stern Remand from Cheon. Cheon answered back with Persecute black, nailing Zombify and Ink-Eyes. Scott-Vargas cast Meloku again, but Wrath of God sent him packing. 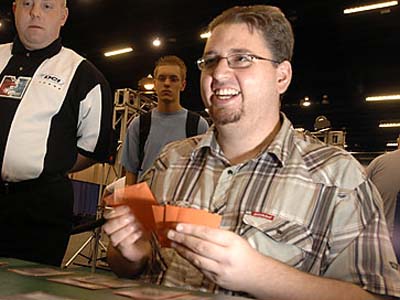 Persecute for white made Scott-Vargas discard the Wraths Cheon had seen earlier, but revealed another Kokusho Luis had ripped off the top. Cranial Extraction for Kokusho from Cheon acted as Castigate, since the deck only runs two of the black mamba. Knowing that Condemn was in Cheon's hand kept Luis from attacking with the Kokusho he had on the board until Cheon tapped out for Angel of Despair, only to find that Scott-Vargas had drawn Remand.

Angel of Despair resolved the second time, dropping Cheon to 4 via Kokusho's parting gift, but giving him board superiority. Court Hussar attacks dropped Cheon to 2, but another Angel of Despair meant that those 2 points of life were more than enough, as Cheon took a two-game lead.

Castigate from Cheon was the first spell of Game 3, foiled by a Remand for at least a turn. One turn later, the Castigate forced Scott-Vargas to get rid of Zombify with an Angel of Despair in his graveyard, but Scott-Vargas ripped another Zombify off the top, using the Angel to kill one of Cheon's land. Another ripped Cranial Extraction from Scott-Vargas resolved without interference and let him remove Angel of Despair form Cheon's deck.

Paul returned the favor a turn later. Kokusho battles kicked into high gear, with each player casting the legend at least twice, with help from Zombify as well. In the end, Scott-Vargas stayed just ahead of Cheon and took down his first game of the match.

"I peeled a few turns that game," noted Vargas. "Every single turn!" exclaimed Cheon, who thought he had the match swept. "Okay, every single turn," admitted Scott-Vargas, chuckling at getting on the scoreboard.

Castigate from Luis stole Cheon's Angel of Despair, but the second Castigate met Remand, which saved the Angel for a turn - until Scott-Vargas cast Persecute naming black, hitting only the Angel but revealing Yosei and Meloku. Castigate got rid of the Meloku, but left the awesome dragon behind. 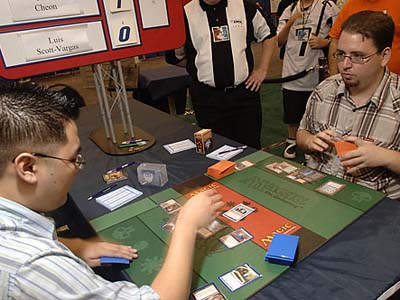 Cheon cast Yosei and started bashing with the dragon, while the next turn Castigate from Cheon revealed that Scott-Vargas had drawn almost nothing except discard spells, and Scott-Vargas was quickly reduced to 1 life and one draw to save him. His back against the wall, Scott-Vargas ripped Meloku from atop his deck, building an army of flying chumps for Yosei out of practically nothing at all.

Wrath of God from Scott-Vargas eventually cleared the board, but with the Yosei triggers on the stack, Luis tapped for five mana, Zombified Meloku back into play, and then returned a land before replaying it. Cheon recovered immediately with both Ink-Eyes and Yosei, constantly putting pressure on Scott-Vargas. Zombify on Angel of Despair finally got rid of Meloku, and Scott-Vargas failed to draw his Wrath of God, meaning Paul Cheon was off to the finals.