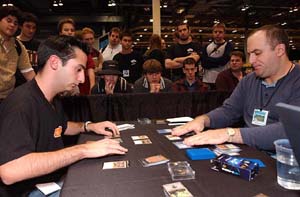 Canada's Gary Wise and France's Raphael Levy both have impressive resumes, including Worlds Top 8's and just about everything else one can accomplish in this game, and now they are playing for possibly the most important thing of all: money.

Levy was going second, but had the first creature down, the vanilla Glory Seeker. Each player put out morphs on their third turns, and Wise had a Dive Bomber on his fourth.

Levy's morph turned out to be Haunted Cadaver, which shredded Wise's hand—he discarded Oblation, Choking Tethers, and Meddle. But he kept Mistform Shrieker, and ripped land number five to drop it right on time.

Levy put out a Catapult Squad and kept Glory Seeker back to keep it company. Wise attacked with his flyer and his morph, which turned out to be Daru Lancer, smacking Levy down to 8.

Levy started playing out his string of Daru Cavaliers at this point, but couldn't get them into play fast enough to stop the Shrieker. Dive Bomber took care of the first attempt at blocking and Pacifism took the second Cavalier out of the mix, but a well-timed Sunfire Balm allowed Levy to take down the Lancer. The Frenchman was hanging on at two life, but the last Daru Cavalier gave him four Soldiers, which brought Gary's ability to engage in combat to a halt. Prowling Pangolin and Festering Goblin came down on Levy's side, and the 6/5 started in on Gary. 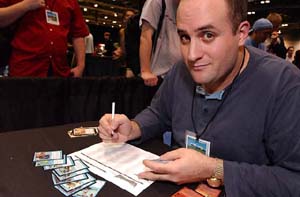 There were quite a few cards Gary could have drawn to break up Levy's Soldier wall, and he peeled one of them—Daunting Defender. By making the Mistform Shrieker into a Cleric, he cut the potential Catapult Squad damage in half, from four to two, which wasn't enough to kill the flier. Levy just shook his head and said, "Nice topdeck," before scooping.

Levy chose to play first in Game 2, prompting Gary to say, "But that's card disadvantage! Remember Brian Weissman?" he asked, referring to the old-school father of the concept.

Both players had Glory Seekers on the second turn, quite a good card in this draft format where tempo is so important. The 2/2's traded, and more creatures came down—Gustcloak Harrier and Dive Bomber for Levy and Mistform Wall and a morph for Wise.

Levy Smothered the morph, which turned out to be Mistform Shrieker. Wise could have played other spells that turn and then cast the Shrieker honest on turn five, but he chose differently and suffered because of it. Gary later explained that he needed to keep up tempo, and as he hadn't paid "full price" for the Shrieker he felt that trading it for an excellent card like Smother was a good deal.

Then Levy started in on his chain of Daru Cavaliers, causing Wise to stick out his tongue in a faux gagging motion.

Wise's deck came to the rescue over the next two turns, coughing up Mistform Dreamer and another Shrieker. "It's good to be the only blue drafter at the table," said Wise. 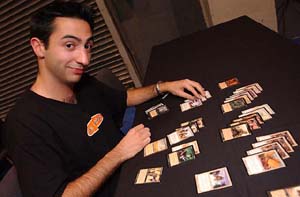 Levy played out Prowling Pangolin and a Daru Healer and it looked like Gary was going to lose the race. But a full-strength Choking Tethers swung things back in Wise's favor; he would win in the air as long as he could block the Pangolin.

Levy had his own trick ready, however, casting Dirge of Dread before attacking with all his creatures for what would have been lethal damage. But Wise had one goody left, Oblation. He sent the Pangolin back into Levy's deck and survived the attack.

Facing death on the next turn, the rattled Levy made a costly error in his second main phase—playing a second land. He had played one before combat, and I suppose he was throw off by getting to draw two cards from Oblation.

Even though he had no cards in hand that would have saved him, second land or no, the judges awarded him a game loss. Aside from the entry of the offense onto Levy's DCI record, it made no difference. Wise was going to win regardless.

Gary now gets to face Jens Thoren and all his bombs in the finals.