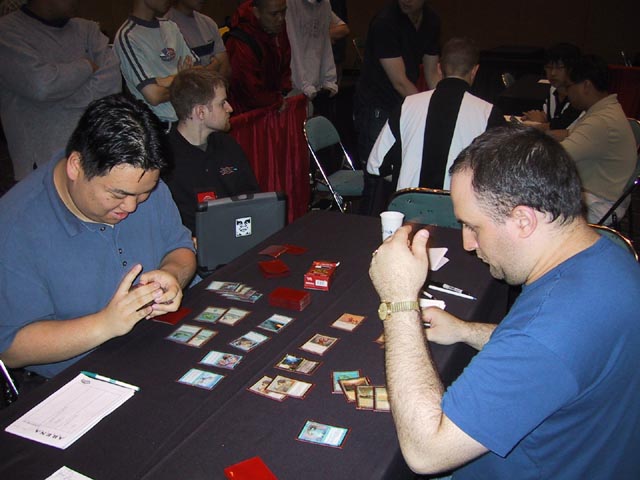 Both of these players won their first match, and are looking for a win here to advance to the finals. While shuffling, Gary joked, "I told someone last night that every time you mulliganed, I was going to pump the fist . . . .I will not do that."

Terry won the coin flip, and played first. He summoned Spiketail Hatchling on turn two, and played a Rootwater Thief on the next turn, which was Counterspelled. Wise then took his turn and played Meddling Mage, naming Wash Out. Tsang answered back with Waterfront Bouncer, telling Gary "You picked the wrong one!" Gary defended his choice. "You only have two in the deck!" The Mage attacked on Wise's turn, and Lin Sivvi, Defiant Hero was summoned. Tsang tapped one land, and played an alternate casting cost Gush. He then used his Bouncer to send Lin Sivvi back to Gary's hand.

Sivvi was replayed on the next turn, along with Ramosian Lieutenant. Terry tapped four mana, and Gary sarcastically said, "That looks like trouble". Troublesome Spirit hit play, and Gary let out a goofy smile. The Spirit and Hatchling attacked on the following turn, and were joined by Rishadan Airship. Both searchers were used during Tsang's end step, as a pair of Defiant Falcons were fetched.

The race was now on, and Wise increased his forces with Ramosian Sky Marshal, declaring it as "Disrupting Scepter". Wise knew what might be waiting, as he asked, "Do you have bounce, Wash Out?" Indeed, Waterfront Bouncer brought back the Meddling Mage, and Wash Out was played on white. Not only did Gary return all his creatures to his hand, but he did the same with his lands, put them into his library, and shuffled to get ready for the next game.

Gary went first this time, and Terry played a second turn Waterfront Bouncer, which had an easy time resolving since Wise had drawn and played Coastal Tower on turn two. A second Bouncer came out on the next turn, and was countered with Absorb. Wise now untapped, and summoned Defiant Falcon. Terry bounced the Falcon on his turn, and missed his third land drop. On Tsang's next draw step he tapped his deck, obviously looking to draw a land, while Gary pointed at the deck and shouted "No!" It didn't come, and Terry bounced the Falcon once again. The next turn saw Terry finally draw a third land, and Wise commented, "Horse . . . .dash, dash, dash . . . for the Sideboard." Meanwhile, he was having his own mana problems, as he was stuck at three lands. 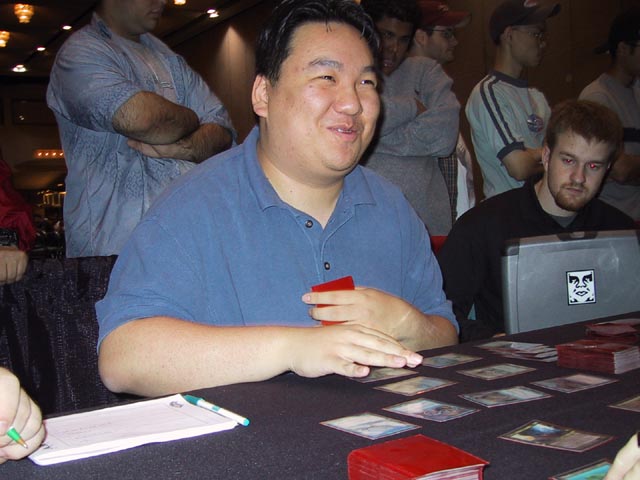 Terry now used Gush, and Gary cycled a Disrupt. He bounced back the Falcon with the Bouncer, discarding Stinging Barrier. Wise was a little disturbed by this, as he noted "That's disturbing". Lin Sivvi came out on the next turn, in addition to the Falcon. Wise would now get to start searching out a Rebel army, and he played Meddling Mage, naming Static Orb. Stinging Barrier was summoned by Terry on the following turn, and Gary didn't seem to mind. Another Falcon was searched out, and both Birds attacked for two points of damage. Mageta, the Lion then showed up, and resolved. Terry tried to get some offense going, as he summoned Troublesome Spirit and bounced back Mageta.

Mageta came right back out on Wise's turn, and Tsang sent the Spirit over for three points of damage on his turn. Terry then summoned Alexi, Zephyr Mage, commenting, "This can't be good for you". A minor counterwar resulted, which Terry won. He then used the Bouncer to send Mageta back to Wise's hand, ensuring that Alexi would have a chance to do her thing. Mageta came right back out, and Tsang continued to attack with the Spirit. The game had fallen into a pattern at this point, as Wise would keep playing Mageta, which was bounced back on each of Tsang's turns. Wise, never at a loss for words, joked that "I always drafted Bouncer over Lieutenant in draft!"

Terry now played Wash Out, which Wise targeted with Disrupt. Tsang added Gush to the stack, and decided not to use his last available mana to pay for Disrupt. Instead, he used that last mana to bounce back Mageta once again. Gary sent in a team of four small searchers, and two got through for damage, while one died in combat. Still, outracing was not an option, as Troublesome Spirit continued to fly in for damage. Wise conceded a while later, realizing he had no way to get out of the difficult board position. 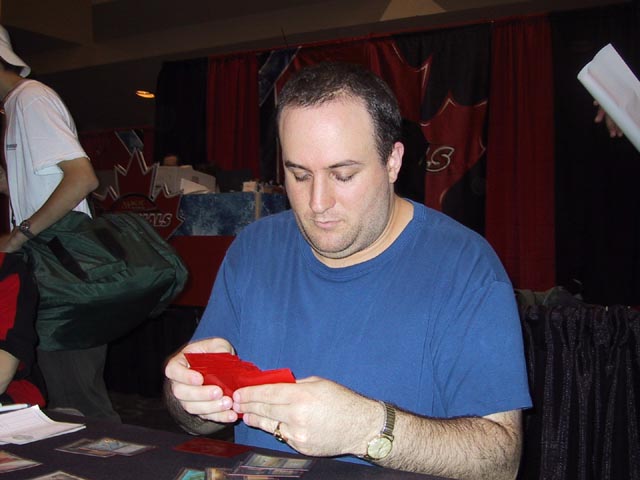 Wise now had his back to the wall, and had to win the next three games to advance to the finals. Tsang mulliganed his opening hand, and kept the next six. Tsang summoned Spiketail Hatchling, and Wise countered it with Memory Lapse. It came back out on turn three, and was countered with Absorb. Gary then played Lin Sivvi on turn three, commenting "I guess that's why I countered it." Tsang decided to go "balls out", and returned every land he had in play to Thwart Sivvi. This left him with no permanents in play, and Wise played another Sivvi on the following turn, but it was countered with Foil. Unnatural Selection hit play on the next turn, and Meddling Mage followed the turn after, naming Wash Out.

Tsang used Gush to draw some cards, which was followed up with Troublesome Spirit. Wise then summoned Ramosian Sky Marshal, while Tsang attacked with the Spirit. It was joined by a second, and Gary told his deck, "You know what I want". Tsang attacked with both Spirits on his next turn, and they were both turned into Legends, which caused one to die. Tsang seemed slightly thrown off, as he had missed this play. Rishadan Airship came out to build up Tsang's aerial army, and resolved after a counterwar. The Mage and Marshal swung back, and the game had now turned into a race. The Spirit and Airship attacked back, bringing Wise to eight life.

Only the Mage attacked on Wise's next turn, and the Sky Marshal blocked and traded with the Airship. Defiant Falcon came out on Wise's turn, giving him the chance to stay alive if it became active. However, Tsang summoned Alexi, which resolved after a counterwar. Once it became active, Tsang won easily. After the game ended, Wise revealed his hand, showing Rebel Informer. If he had drawn a black source, he would have been able to summon the Informer, and use it with Unnatural Selection to send back all of Tsang's creatures.